Despite the small problems, building a thriving city in Caesar III is fun.

The company line on Caesar III is that it's SimCity set in the Roman Empire. That's only partially true. You do run a city (or, rather, a series of cities) in a fashion somewhat like the classic urban management game, but the game mechanics of Caesar III are more akin to Blue Byte's Settlers II. Unlike in SimCity, you do not simply zone your territory and sit back while your city prospers or fails. Instead, you are commissioned to perform a much wider array of tasks, ranging from setting up efficient production lines to maintaining a military force. Caesar III is a much better game than Settlers II, and combines some of the best elements of both that game and SimCity. But it manages to suffer from Settler II's most glaring shortcoming: the combat system. What's worse, it finds a shortcoming of its own with some problems that make efficient management often more difficult than it should be. And both of these serve to slightly hamper what is otherwise a very enjoyable game.

Caesar III is mission-based. In each progressive mission, you are assigned certain goals, usually a target population and target scores in the various categories in which your performance is rated, including the prosperity and culture level of your people and your favor with the emperor. To its credit, Caesar III gives you two territories to choose from at each subsequent level. In most cases, the difference between these two areas is how much hostility you will face, allowing those who want to concentrate on development to stick to the peaceful provinces, and those who want to battle it out with the game's combat to venture into the war-torn areas.

In the peaceful territories, you'll find that the game's many strengths are emphasized. You must zone for housing, find a source of food (either through farming, trading, or fishing or a combination thereof), and proceed to set up profitable trade industries, please your populace, and satisfy the demands of the gods. Planning the city is the best part of Caesar III, and watching your people and your industry thrive is a very satisfying experience. For trade, there are numerous items to make, such as weapons, wine, furniture, oil, and pottery. Each of these items has a prerequisite ingredient (which can also be traded, but for less money), such as iron, grapes, timber, olives, and clay. These ingredients can often be harvested from the land, but often you'll need to trade for the items you need in order to make the items you want to trade. Only certain items are in demand in every region, so you'll have to plan the quantity of production accordingly (although most trade items are also needed for domestic use). Caesar III makes the most of its artificial constraints in order to make each subsequent level a bit more complex, but it's a fun system.

Pleasing your populace requires schools, theaters, libraries, bathhouses, and the like. Many of these complexes can't be built too near housing or the neighborhood won't reach the most desirable class levels. Of course, pleasing the populace also requires food, and lots of it. This is the area in which Caesar III is both the most demanding and, sometimes, the most confounding. Food is stored in granaries. Market collectors go to these granaries and then distribute the food to the people. Unfortunately, collectors often don't go to the closest granaries. On many occasions, market traders will pass through granaries stocked with a variety of food, only to go take food from another granary located far away. All the while, the people are starving. Neighborhood market workers also have the unpleasant habit of wandering off into areas where food is not needed (or, worse, where no one lives), and all the while your people go hungry. It's frustrating, especially when you're trying to reach a particular prosperity level, your granaries are brimming, and yet your people are starving. These problems are easily fixed by "tricking" the market workers by removing certain areas of roadway, but either smarter workers or the ability to micromanage routes would have improved the system tenfold.

You must also please the gods, which can be tricky. The five deities (Ceres, Neptune, Mercury, Mars, and Venus) require constant attention with temples or festivals, and this attention must be divided somewhat equally. Happy gods will give you benefits; angry gods will punish you. There's no way to schedule these events, so you must get into a sort of habitual ritual of holding a festival every month or so. Forget, and you spend a few months playing catch-up. Forget for a while (and it's easy to do with everything else that's going on), and you're in trouble. Plan to lose some food or have a small insurrection every once in a while.

Despite the small problems, though, building a thriving city in Caesar III is fun. It's only defending said city that is really a problem. Combat is the weakest point of Caesar III. You simply build the appropriate structures (a barracks, a military academy, and a fort), and soldiers are generated. There are three types of soldiers: mounted, javelin throwers, and legions. Each has several formations to choose from, but they don't have much impact. Combat is mostly a matter of selecting the group and clicking on a point on the map. The soldiers will then go to that point, attacking anything in the way. At least some of them will. Unless they hit an enemy head-on, they'll just keep moving while their brethren fall in battle. So combat simply becomes a matter of constantly clicking on the enemy.

Combat aside, Caesar III is a very good game. The early levels are especially fun, as the problems don't become apparent until later. Giving you more control in certain areas and less control in others would marginally improve things, but Caesar III manages to keep the positives well ahead of the negatives. 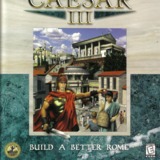 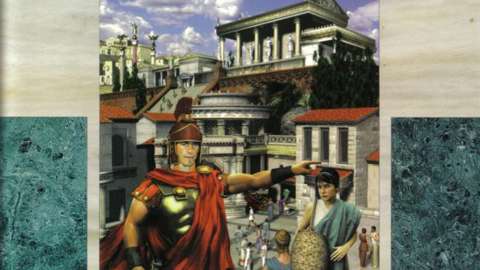 Despite the small problems, building a thriving city in Caesar III is fun.