Although Buzz on the PS3 is more of the same, the addition of user-generated questions, downloadable question packs, and new wireless buzzers makes it a worthwhile upgrade for fans.

UK REVIEW--The Buzz series has been a steady fixture in Europe for many years, with seven different editions of the main game and four versions of the Junior spin-off. Like many other Sony Europe games, the series took its time getting across the Atlantic, but Buzz! The Mega Quiz finally hit North American PlayStation 2s last year. Now, the inevitable PlayStation 3 version has arrived in Europe, and Buzz! Quiz TV uses the console's increased functionality to offer custom question sets, online play, and wireless buzzers for the first time.

The basic formula for Quiz TV is exactly the same as previous Buzz games. The show is hosted by a character named Buzz (with Australian soap star Jason Donovan reprising the voice), and it still includes around 5,000 questions. The buzzers have received an upgrade and the game comes bundled with four of the new wireless controllers. They work incredibly well, and you'll probably wonder how you put up with those tangle-prone tethered remotes in the past. The only downside is that the wireless remotes require two AA batteries each, but you can use the original PlayStation 2 buzzers with the new game if you prefer. As a bonus, the new wireless buzzers also work with all of the old games.

Quiz TV has three main modes: a solo mode that pits you against the clock, a local multiplayer mode you can play with up to seven friends, and an online mode that pits you against players from around the world. Sadly, though, only one person per console can play the game online at any given time. Single-player mode is a rather dull experience, a bit like playing a board game by yourself. You can't play against AI opponents, so instead you compete against yourself and the clock to get the highest score possible within a limited time. Buzz is designed to be a party game, and it's a lot more fun when you have a few companions to play with you.

The questions are divided into five channels: The Music Channel, The Movies and TV Channel, The Knowledge Channel, The Sports Channel, and The Lifestyle Channel. You can choose a particular category, or choose Channel Hopper to get an assortment of questions from all of the channels. Quiz TV also includes MyBuzz, a channel based on user-generated questions.

The preset questions in Quiz TV aren't generally difficult, but there are certain questions that will stump all but the most ardent trivia buffs. Unlike previous titles, Quiz TV doesn't allow you to choose between easy and hard questions before a game, with only one difficulty setting on offer. Games typically start out easy at the beginning and get slightly more difficult as you progress. Given that the person with the lowest score at the end of each round chooses the topic for the following round, there's a bit of a rubber-band effect that lets people catch up, assuming that they know their chosen subject. Quiz TV also keeps tab of answered questions to ensure that frequent players don't have an unfair advantage through the memorisation of repeated questions. To date, we don't recall seeing any single question asked more than once.

You can head over to mybuzzquiz.com and create quizzes using your PlayStation Network ID. You're able to set the privacy options on your quizzes so that everyone may play them, or limit them so that only you or your PS3 friends are able to see them. Quizzes can be tagged as mature, and sorted into one of the predefined question categories such as lifestyle, as well as subcategories such as video games. Each set requires eight questions, and once entered, they're scanned for offensive language and submitted to the system. It takes only a matter of minutes for them to be available to play in the game. Popular topics include movies and TV, sports, general knowledge, and even Chuck Norris. Once you've played a set, you can then rate it and report offensive quizzes if any questionable material makes it through. MyBuzz is one of the most compelling parts of the package, and there's already a burgeoning community around the game.

Although you can tailor questions to a specific subject, there's no option to play only the types of rounds that you want (for example, Fastest Finger, Pie Fight, Point Builder, or Pass the Bomb) or to set the total amount of questions or rounds in MyBuzz, or in regular single or multiplayer games--it's all up to the game. All of this results in the experience becoming a bit repetitive after playing through a few times.

Quiz TV supports downloadable content, and a number of question packs are already available on the PlayStation Network. For £3.49, you can buy 500-question packs on themes such as science fiction, rock legends, UK culture, and Australian culture.

Buzz is bright, clean, and fun, and looks just like a gameshow should. While they won't win any awards, the visuals are pleasing and developer Relentless Software has stepped up the overall quality of the game since the PlayStation 2 versions. Technically, Quiz TV holds a steady frame rate even with eight contestants on the screen at a time, and despite a few jaggies in some of the background objects, is generally drawn without any visual deformities.

The contestants themselves are particularly well drawn and incorporate some of the same stereotypes from previous Buzz games. Some of the choices in Quiz TV include a cheerleader, a mime, a rocker, an Elvis impersonator, a superhero, a Darth Vader-esque villain, and even a Japanese schoolgirl who bears a close resemblance to Chun-Li, complete with giggling, celebratory jumps. Quiz TV's sound effects, background music, and dialogue are all spot-on, despite being corny, cheesy, and repetitive at times, and Buzz himself still has a certain cringe-worthy charm. The lines delivered by the illustrious host are more polished this time around, and he comes across almost as smooth, smarmy, and schmaltzy as any real-life daytime TV host.

Trivia gurus may still find Buzz! Quiz TV a walk in the park, but it nevertheless serves up an interesting array of questions for the party crowd. At its core it's just more of the same, but the series' PS3 debut offers a few unique, new peripheral features that make it worth the upgrade. If you didn't like previous iterations, it's unlikely that you'll enjoy Quiz TV, but if you've yet to pick up a copy of Buzz, this version is the best yet. 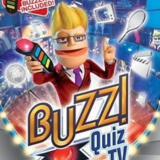 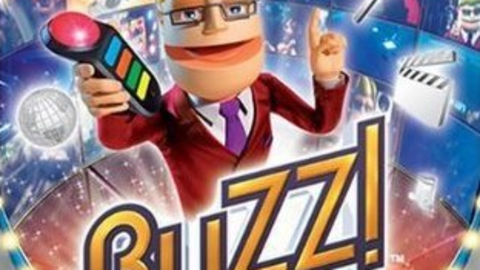 The BUZZ! Quiz franchise comes to PS3 with support for online competition, user-generated content, and comes packaged with 5000 questions.