Saturated with the blood of dozens of hapless souls, the floors squish beneath my feet. But there's plenty more work to be done. Chainsaw-wielding, rocket-powered cyborg mega-men attack from all directions as I struggle to dip and dodge between their mechanical blades. With each successful shotgun blast, another bursts into pixelated flames and lo-fi screams.

Butcher isn't for the faint of heart, and I don't just mean because, as its tagline says, "the easiest mode is Hard." It's raucous and aggressive, channeling the same violent and brutal '90s counterculture that birthed Doom and Duke Nukem. This time around, the chaos and gore of those hyper-masculine, guns-and-balls shooters comes in the form of a 2D action-platformer.

Its pixelated ultraviolence is accentuated by appropriately abrasive sound design--clanks and grinds harmonize with the vibrations of heavy machinery in a way that feels strangely timed to your play--no matter how quickly you rip and tear.

Most enemies can shoot and kill you as long as they can see you--even if you're clear across the screen. And because each area has dozens of trigger-happy bad guys ready to splatter your insides all over the walls, controlling visibility with corners and other obstacles is essential. As you go, you learn how important it is to limit your vulnerability. You'd think this would turn the game into a stealthy romp, but that's not quite accurate.

Butcher builds up to a ludicrous pace and encourages exploration to find the best tactic to handle any given conflict.

There's an emphasis maneuvering between different elevations. Strangely, however, that doesn't affect line of sight--both you and the meatbags you need to shred can shoot through most floors and ceilings. This means that you'll often need to peek your head out to catch their attention, then quickly move to a position where you can lie waiting in ambush. This works, for the most part, because so many of the environments support that style of play. If you're clever, you can kick (or trick) enemies into pits of lava and other hazards.

Butcher builds up to a ludicrous pace and encourages exploration to find the best tactic to handle any given conflict. This process gets tougher as the game goes on. Enemies will start pulling out quick-firing rocket launchers, and as they swarm you in great numbers, you'll have to tighten up your marksmanship and move faster to avoid incoming projectiles. If you miss a few too many shots, you'll run out of ammo and have to rely on your chainsaw to finish the job. This, of course, requires you to get much, much closer to your victims, leaving you exposed. Butcher always offers a trade-off between expediency and safety. That trade-off is essential, adding a bit of depth and pushing you to change your approach as you grow more and more confident in your skills.

Outside of combat, Butcher bleeds style. Each stage is an industrial or post-apocalyptic hellscape, complete with booming metal, lava, and grimdark backgrounds draped with chains and bones. The game leans on its presentation to help sell the theme of anarchic, bloody combat. Each gunshot visibly shakes the screen, and successive hits yield torrents of blood. Kills often generate pixelated chunks of nondescript body parts that you can kick around the stage--either to coat the area in blood or into an enemy as a distraction.

Butcher is a living relic, a callback to the days when being gritty and macabre was a goal unto itself. But make no mistake: beneath that gruff exterior is a thoughtfully crafted game . The allure of an ultraviolent indulgence might be enough to get some in the door, but the visuals are so pixelated and the audio so compressed that Butcher never feels excessive. More than anything, the aesthetic is backdrop for a remarkably creative game that coaxes you to try new, risky strategies in search of a higher score.

View Comments (64)
Back To Top
8
Great
About GameSpot Reviews 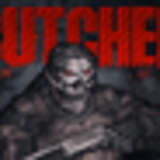 Dan Starkey will always have a soft spot for '90s-inspired action games, especially if they don't take themselves too seriously. He played through each of Butcher's 20 levels on Hard (the default setting). GameSpot was provided with a complimentary copy of the game by Transhuman Design.