Controls that fluctuate between touchy and unresponsive, very few game modes, and lousy multiplayer all conspire to bring down Bust-A-Move Bash!

Bust-A-Move Bash! marks the debut of Taito's bubble-bobbling puzzle franchise on the Nintendo Wii, and if you were hoping for some clever motion controls that will revitalize the exhausted Bust-A-Move gameplay formula, prepare to have your bubble burst. The controls turn out to be one of the biggest liabilities against Bust-A-Move Bash!, though the meager feature set and skill-less multiplayer certainly don't help make the package any more enticing.

Unsurprisingly, the game's big twist is the way it uses the Wii Remote to control the game, and though there are several different configuration options, none of them are ideal. Using the gun controls, you point the Wii Remote at the screen, angling it left and right to aim your launch arrow at the bottom of the screen. If you point the remote directly at the screen, the controls are far too sensitive, and the slightest tremble in your hand will throw your aim way off. Tilting the remote up and down just the slightest bit has a severe effect on the sensitivity, and though it's possible to wrangle out some decent control, it feels like you're constantly struggling against the game. Alternately, you can use the baton control scheme, which has you holding the Wii Remote straight up and down, but it's no better, trading in twitchiness for a general sluggish inaccuracy. There's also an "easy gun" control method, which gives you a targeting reticle to aim with, and though it takes all the challenge out of the game, it might be the most useable motion-control scheme in here.

The single-player game consists of a predictable puzzle mode and an equally predictable endless mode. There's also a shooting mode that has only the bubble theme in common with actual Bust-A-Move, where you shoot bubbles as they pass across the screen, using the D pad to cycle the color of your targeting reticle to match the color of the bubbles currently on the screen. It's simple, and it goes nowhere. For multiplayer action, the versus mode supports up to eight players, but even with just two, the action is so chaotic that it's impossible to keep track of. And since the playfield, which is shared by all the players, is so littered with insane power-up bubbles, it's pretty pointless--just shoot anywhere, and you're bound to trigger something. The only clever thing about the versus mode, and perhaps Bust-A-Move Bash! on the whole, is the way you can have eight players on four sets of controllers by having one player use the Wii Remote while the other uses the Nunchuk or the Classic Controller. The Nunchuk doesn't work so great, but the Classic Controller is unsurprisingly the best way to play the game, which makes the inability to use it anywhere besides the versus mode supremely frustrating.

Bust-A-Move Bash! feels thoughtlessly put together. Even the presentation, which sports a blandly friendly visual style and monotonously cheery background music, consists of just a few backgrounds and looping tunes. With little in the way of actual content, the game tries to prop itself up with its flimsy, gimmicky controls, but the whole thing buckles under its own weight. 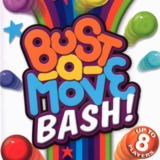 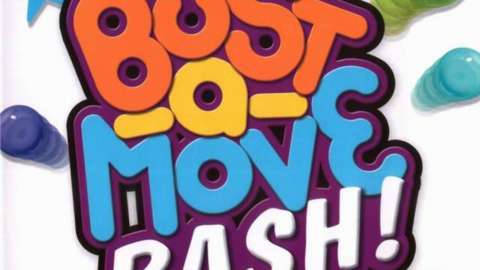 Majesco brings the Bust-A-Move franchise to the Nintendo Wii.