Fans of the Bust-A-Move puzzle series can look forward to more sleepless months with Natsume's release of Bust-A-Move 4.

Fans of the Bust-A-Move puzzle series can look forward to more sleepless months with Natsume's release of Bust-A-Move 4 exclusively for the PlayStation. Once more, the rotund dragons from Taito's Bubble Bobble series find themselves having to restore the color in their monochrome world and return for another round of manic bubble-bursting mayhem.

The general premise of Bust-A-Move has remained the same since the game's inception on the Neo Geo back in 1993. In single-player mode, you shoot colored bubbles up into clusters of other bubbles. When a bubble makes contact with two or more bubbles of the same color, they pop. The object of each stage is to pop all bubbles before the timer reaches zero. There is a total of 640 single-player levels, which includes both the arcade and puzzle mode stages. In two-player mode, the game stacks up against the best Puzzle Fighter battles out there with both players clamoring to send patterned attacks across the screen. Since the biggest draw of the Bust-A-Move series has always been the multiplayer aspect, it's good to know that Taito has kept this portion essentially unchanged from previous installments. The dueling matches still capture the frenetic pace set by previous Bust-A-Moves.

As a sequel, Bust-A-Move 4 improves on just about every aspect of the game. Returning to the kaleidoscopic spectacle are old-timers Bub and Bob, along with nine totally new characters. Similar to versus modes in other puzzle games, each character has its own strengths and weaknesses based on the type of bubble pattern the character uses to beset opponents. New devices such as pulleys and antigravity blocks have also been added to the puzzle mode and make the single-player experience much more compelling. Pulleys, for instance, add a new dimension of lovable frustration. A pulley consists of two bubble-laden anchor blocks attached to a rope; popping bubbles attached to each anchor block will cause the heavier side to fall and the lighter side to rise. The goal is to get rid of all the bubbles without having one side or the other hit the bottom.

As with most puzzle games, Bust-A-Move 4 starts off tame but soon rears its rather difficult head. Other notable twists include antigravity blocks, which tug dropped bubbles back up to the cluster - you'll want to avoid them if possible. Most importantly, Bust-A-Move 4's versus engine is now equipped with the "chain reaction" system. Dropped bubbles will actually home in on other spheres of the same color and pop them, which in turn may drop other bubbles and prolong the chain reaction. With this new system, you can stage devastating combos or quickly turn the tide of victory. For those unfamiliar with chain reactions, you can disable the system. Finally, to prolong the value of Bust-A-Move 4, Taito has implemented a long-overdue level editor to be used in both single- and multiplayer fun. Levels can be transported via memory cards so you can easily bring the challenge with you.

Keeping in the tradition of previous games in the series, Bust-A-Move 4 sports the same saccharine-sweet anime graphics and likeable character designs. Most of the illustrations and dialogue spoken before and after rounds of bubble battles are mind-boggling, strange, and irresistible. Bub and Bob shift between diametrically opposed emotions so that one minute they're gleeful, and the very next frame of animation finds them doleful and sad. The combination of character design and quirky characterization pushes Bub and Bob into dangerous Pikachu territory - for anyone who's slightly soft for eccentricity, be prepared to fall in love.

The in-game graphics themselves are also bright and enthusiastic. Like previous Bust-A-Moves, there's graphical detail to be reaped if you take the time out to look at anything other than where the next bubble's gonna fly. The chain-reaction system also bedazzles the eyes with its impressive display of 2D love as clumps of bubbles scurry back and forth across the screen. Sound effects in Bust-A-Move 4 also match the visual charm of the game. Each character has a distinct voice - some freakier than others . The music is delightfully odd. Most of it rattles with excitement and builds up perfectly for a puzzle game. There's one song that features a chorus of prattling angelic-sounding children who repeat a chorus as tantalizing as it is hypnotic. Then again, if you've seen Bust-A-Move 3, none of this should be of any surprise.

Bust-A-Move 4 is a great diversion from the serious and morose action titles so in vogue as of late. The single-player game has enough characters to achieve a high volume of replay, and for puzzle battles, the multiplayer mode stands among one of the best. Bust-A-Move 4 will be the type of game you play with your non-gaming friends, because it's got so much character and because puzzle games are always respectable. Be warned, however, Bust-A-Move 4 is also extremely addictive... ah, what the heck, indulge yourself. 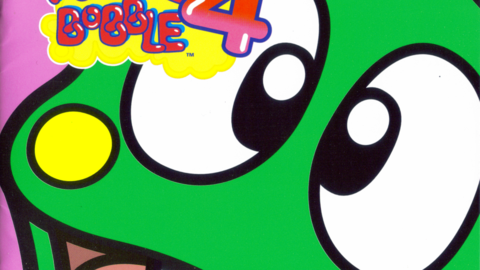 Fans of the Bust-A-Move puzzle series can look forward to more sleepless months with Natsume's release of Bust-A-Move 4.