Burnout Dominator is a solid driving game that keeps things moving with a good sense of speed and variety of events.

The Burnout series has added and subtracted plenty of features over the past few years by continually adjusting and refining its hard-driving formula from iteration to iteration. Burnout Dominator isn't a proper sequel for the series, because Burnout 5 is currently in development for the PlayStation 3 and Xbox 360. Instead, Burnout Dominator takes bits and pieces of the driving mechanics and features from the past Burnout games and brings them together in a new way. The result is a slightly more skill-based racing game than the more combative approach taken in the last couple of games in the series, but the changes are slight enough that anyone looking for a high-speed racing game should find Burnout Dominator enjoyable.

The key to the Burnout series has always revolved around driving dangerously. When you drive on the wrong side of the road, catch air, narrowly miss traffic, or bash into another racer, you earn boost. The boost meter in Dominator is more like the boost features from Burnout 2. Rather than growing or shrinking, depending on how many other cars you take out, the boost meter has a set length. When you fill up the meter entirely, it turns blue, indicating that you're ready to supercharge. The goal at this point is to hit boost and hold it down until it's all gone. That's called a burnout. On top of that, when you're supercharging, driving dangerously fills up a secondary meter that governs how much boost you get when your burnout is completed. If you can fill that second meter, you refill entirely and continue your supercharge in what's called a burnout chain. By chaining burnouts together, you can effectively boost your way around the track at top speed. This gets tricky because you'll have to execute some risky maneuvers to keep your chain going, and you'll be doing all of that at top speed. It's an effective system that really gets the risk-versus-reward-style gameplay moving, regardless of the event.

The events in Dominator are what you'd expect to see from the Burnout series. The maniac races are new and give you a score readout for which you gain points by driving dangerously. You'll also encounter lap time challenges, drift events that ask you to drift a long distance while you drive, races that put you up against five other cars, a road rage challenge that gives you a ton of enemy cars to slam around, and so on. There's a nicely varied list of events, and the way the different events and car series unlock means that you'll always be doing something different. There isn't any crash mode in Dominator, which is unfortunate, because the crash mode always provided a nice change of pace.

Burnout Dominator is more impressive on the PSP than it is on the PlayStation 2, and you get the distinct impression that this game was designed with the PSP in mind because it has more in common with something like Burnout Legends than with Burnout Revenge. While the experience may feel a little bit scaled back in spots, this is still a fast-paced driving game with a good sense of speed. Both versions have multiplayer, though the PS2 is limited to local, offline multiplayer, while the PSP version lets up to six players play over a local ad hoc connection. Burnout's multiplayer has always been a fast, fun ride, and if you have a stable of friends nearby who love driving games, the PSP version's multiplayer options are just as exciting.

While the game moves quickly, it does so at the expense of overall visual quality. The car models are chunky and occasionally ugly. The crashes don't deform those car models very much, so they aren't the huge, dramatic events that they've been elsewhere. Also, if you've been playing Burnout in HD on the Xbox or Xbox 360 lately, it can be hard to transition to the PSP's small screen or the PS2's very blocky-looking display. It can be tough to make out other cars at a distance, and the game moves so quickly that you need to identify those threats as soon as possible. The PS2 version supports 480p, which cleans up the image a bit, but it doesn't completely solve the problem. And in case you were wondering, the PS2 version of the game seems to run well on a PlayStation 3.

Burnout Dominator is more Burnout, and that's great. It may not have all the newfangled bells and whistles that you'd want from a sequel, but if you're a fan of the series who absolutely must have new tracks as soon as possible, Dominator should satisfy you nicely. 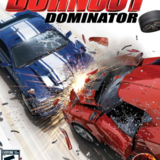 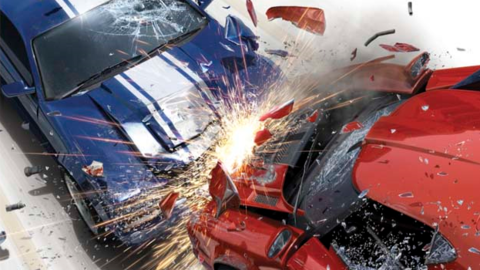 Burnout Dominator isn't a sequel to the previous so much as it's a return to the series' roots.