We really haven't moved too far away from the days of Pole Position. Like Pole Position, today's driving games tosses you in a car and challenges you to drive around a track and make it to the checkpoints on time. Mix in a few dazzly features like multiple cars and tracks, and you have this year's smash racing hit. Welcome to the Burning Road....

Burning Road is, for the most part, a Daytona USA wannabe. Given a choice of three tracks and a few different vehicles (including a monster truck), a driver is charged with completing five laps around the track against seven other cars. The pack stays very tight, which means one slight mistake sends the player plummeting from first to eighth in a heartbeat. The controls also take some getting used to, so expect to hug the outside wall while learning the rules of the road.

Graphically, Burning Road is a touch behind Daytona. The roads and cars appear blocky, though several different camera angles (behind the car, slightly above it, and in the driver's seat - where you can see the air freshener swinging from the rear view mirror), adds an element of pine-forest freshness, as it were. Burning Road also sports two sound options: the US music, which is raucous and rocking, replete with stereotypical taunting voices reserved for players who finishing last, and the original music (from the Japanese version), which is more like Daytona's boppy tunes that mention the name of the game in the lyrics. This voice is also more businesslike, with no trace of fanfare whatsoever.

For driving game fiends, Burning Road won't disappoint. And while it lacks innovation, it's solid enough to compete dollar-for-dollar with Ridge Racer Revolution. 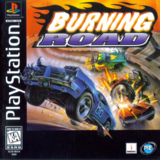 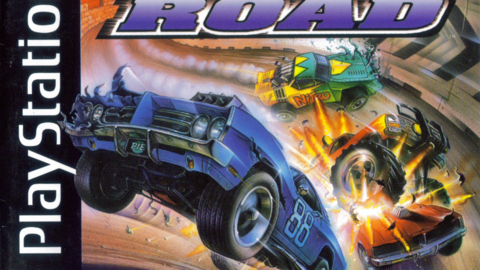