Though the Buffy the Vampire Slayer TV series has seen its series finale and has traipsed its way into the land of pending syndication, these facts do not mean the franchise is without life. Buffy the Vampire Slayer: Chaos Bleeds is the follow-up to last year's well-received Buffy the Vampire Slayer, an action game exclusively developed for the Xbox by The Collective. In this year's installment, Buffy is on all three console platforms and has changed developers--with Eurocom Entertainment Software taking over the reins. Despite the personnel and console changes, however, Buffy is back in true form. For better or for worse, Chaos Bleeds retains practically all of the gameplay elements of the first Buffy game, but there are some significant upgrades as well.

Chaos Bleeds' story is similar to last year's game in that it is treated as something of a lost episode from the show. Buffy enthusiasts can place the game in the time line of season five, nestled snugly between episodes 17 and 18. The game begins with Buffy and crew having to stave off an onslaught of vampires at the Magic Box (the local magic shop where Buffy's operations are based). As the battle comes to an end, one vampire lets slip a threat of impending destruction--courtesy of vampire head-honcho Kekistos. What ensues is a lengthy journey that pits Buffy and company against a number of familiar foes, ranging from the insidious Ethan Rayne to the very epitome of evil itself--known as "The First."

Familiar villains aren't the only characters who make appearances in Chaos Bleeds. Aside from Buffy's usual cohorts--Willow, Xander, Spike, Tara, Giles, and Anya--the game also features appearances by rebel vampire slayer Faith and the ever-wooden Sid the Dummy. Buffy, Willow, Xander, Spike, Faith, and Sid are all playable in different sections of the game, though you don't get to choose which character to take through each section of a mission. Rather, the game simply switches control over to a different character depending on what the plot requires. Additionally, in some instances characters will pair up in combat situations. For instance, you may encounter a situation where a player-controlled Buffy and an AI-controlled Willow will team up early on to trounce a group of vampires. Some situations will also require your controlled character to protect another. Such is the case when Willow, at one point, finds herself guarding Tara from Ethan Rayne's attacks.

The addition of multiple playable characters is important not only from a storyline point of view but also from a gameplay one. Rather than just giving each character the same basic list of moves and attacks, each one actually fights and handles much differently. For instance, Buffy, Spike, and Faith are much more combat-savvy, and, thus, their moves and fighting styles are geared toward martial arts-styled punches, kicks, and the like. A character like Willow, on the other hand, is far less capable when it comes to hand-to-hand combat; instead, she focuses on magic. Therefore, Willow only has one basic strike attack, and the remaining attacks are made up of a hefty list of spells that she will learn as the game progresses. And then there's Sid, who, due to his small size, is not nearly as powerful in his attacks as the rest of the characters. He is, however, much faster, and therefore he can launch a flurry of punches and kicks at an opponent. These flurries inflict roughly the same amount of damage as the rest of the characters. Overall, the game does a great job of giving each character his or her own unique style of fighting. (Though if there is one flaw, it's that there simply aren't enough instances to play as Sid, who is easily the most amusing character to play in the game).

Aside from this addition, there aren't too many major changes to Buffy's gameplay. The game uses the same basic control scheme as the previous Buffy game, with familiar punch, kick, jump, and action buttons. One slight change is that staking an opposing vampire is now controlled by a separate button from the action button--but, otherwise, it's pretty much the same setup. Compared with last year's game, Chaos Bleeds actually feels a bit more realistic in its combat. This is not to say the exaggerated elements of the TV show's fight sequences aren't there, as you'll still see plenty of exaggerated jumps and throws and lots of vampires sent spinning through the air in an impossible manner. However, the game definitely seems less hurried in how the combat progresses, and, overall, it actually feels a bit better. Weapons are, of course, still a big part of the gameplay as well, and Buffy has plenty of different weapons at her disposal, including her trusty wooden stake, a crossbow, a battle-ax, a spike, a shovel, a water gun filled with holy water, a gun that shoots hellfire, and a host of other goodies.

Combat, however, isn't the only primary element of Chaos Bleeds' gameplay. In the previous Buffy game, puzzle-solving was a key factor in progressing through the game, and Chaos Bleeds doesn't alter that design one bit. The game features loads of different puzzles throughout each level. While the overall scope and difficulty of some of these puzzles--especially in the later levels--is definitely harder compared to the game's predecessor, the basic concept of each puzzle is still effectively the same. Each puzzle basically involves a lot of item finding and object movement. As it stands, quite a bit of the game's mission design revolves around locating and retrieving items. Without giving anything away, it must be stated that the later portion of the game's plot, in fact, relies very heavily on this concept, and, for all intents in purposes, it turns into a bit of a fetch-quest. Though, thankfully, there's still plenty of combat and storyline injected into this section, so the flow of the game isn't damaged.

Outside of the game's single-player mode, Chaos Bleeds contains an all-new multiplayer component. There are four different multiplayer games in the mode, including survival, bunny catcher, slayer challenge, and domination. Survival mode pits players against one another in an all-out brawl with the last player standing named the victor. Bunny catcher is an amusing game where players must chase after a blitz of different-colored bunnies with each type of bunny assigned a different point score. Slayer challenge is a handicap match that puts one player in the role of a slayer, and the remaining players are in control of a group of monsters. Finally, domination is sort of a king-of-the-hill game where players attempt to take control of a number of pentagrams and subsequently collect points based on how long they maintain control of the pentagrams. While these games are a nice addition, they aren't executed as well as they could have been, and, more often than not, victory in any one of them is usually pretty easy if you know the correct (and cheap) tactics to employ. However, the modes do support up to four players, and, as you play the single-player game, you can unlock up to 24 different characters to use in multiplayer mode.

The one aspect of Chaos Bleeds that has seen the least improvement over the previous Buffy game is its graphics. Buffy the Vampire Slayer was a pretty great-looking game, and Chaos Bleeds looks a whole lot like it--though now the game seems a bit dated by comparison. Nearly all of the main character models from the first Buffy are pretty much the same, except for Buffy's model, which somehow seems to look a little bit less like Sarah Michelle Gellar. Enemy models, fortunately, have been improved a bit, and they look and move a lot better. In general, the game does animate and run quite smoothly, with notable improvements in the facial animations during cutscenes and the enhanced physics evident during fight sequences. Each level also has a nice level of detail and captures the atmosphere and design of Sunnydale extremely well. Between the three versions of the game, the Xbox version is the definitive visual winner, exhibiting the best texturing, best frame rate, and best lighting. The GameCube version is a close second, looking only slightly darker than the Xbox version. The PlayStation 2 version has some periodic hiccups when more than a few enemies are onscreen, and, though the effect is fairly minimal, it's still noticeable.

Chaos Bleeds' sound, luckily, fares much better. Though Sarah Michelle Gellar once again does not bother to reprise her TV role for her video game counterpart, and Alyson Hannigan has gone AWOL, the voice acting in the game is still extremely well done. The voice actresses for Buffy and Willow are both entirely competent (though Willow's inflection sounds a bit more like Hannigan's American Pie character). The remainder of the cast, which includes James Marsters, Anthony Stewart Head, Amber Benson, Nicholas Brendon, and Eliza Dushku are spot-on. The game also features some really incredible music, most of which was ripped straight from the show's musical score. The mood and atmosphere captured by the soundtrack really give you a great sense of dread in the appropriate spots, and, on the flip side of the coin, they do a great job of conveying the game's underlying sense of irony and humor when required. The rest of the game's sound effects aren't anything particularly special but still fit quite well into the game's subject matter.

Though Buffy the Vampire Slayer: Chaos Bleeds can't be called any kind of real major technical improvement over the first Buffy game, it provides enough new and interesting achievements to make it a great follow-up. Additionally, the game has lots of other content that should greatly appeal to the Buffy audience, including a number of cast interviews and photo galleries (with an exclusive James Marsters interview in the PlayStation 2 version). In the end, Chaos Bleeds is an excellent, well-put-together action adventure game that most fans of the genre should be able to enjoy and any Buffy the Vampire Slayer fan will love. 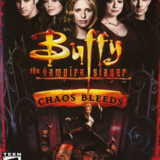 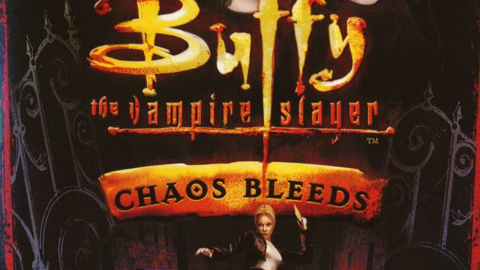 8
Sign In to rate Buffy the Vampire Slayer: Chaos Bleeds