This motion-controlled bowling game is a passable re-creation of the sport provided you ignore its optional Move support.

It was almost four years ago that Wii Sports launched alongside the Wii and made motion-controlled bowling a popular pastime in living rooms everywhere. About a year later, publisher Crave released the disappointing Brunswick Pro Bowling to take advantage of the same hardware. And now, to coincide with the release of Sony's Move motion controller, Crave has released a new PlayStation 3 version of the game. Ironically, while there's some satisfying bowling to be had here, the first thing you need to do in order to find it is ditch the Move hardware and pick up a regular controller. Brunswick Pro Bowling has its fair share of problems either way, but with the right controller in your hand, it's at least a passable re-creation of the sport.

Regardless of which controller you're using, the actions you perform are much the same; you hold a button down to pick up your ball, swing your arm much as you would at a bowling alley, and then release the button to let go of the ball. The regular PS3 controller needs to be held at an unusual angle in the palm of your hand when you're bowling with it, but it's not nearly as awkward or as uncomfortable as the in-game tutorial diagram makes it look, and it works well. Playing with the Move motion controller, on the other hand, is an exercise in frustration. The only prompt you're given to calibrate said controller is an error message that pops up the first time you try to bowl, and sadly, things don't improve much afterward.

For starters, the arrow that you use to aim--which you'd expect to more or less correspond with the position of your ball--in fact corresponds with the position of your feet when playing in Move mode. This discrepancy is something that you can compensate for, but it puts you at a disadvantage because when the game automatically suggests a position from which to take your next shot, it fails to take the discrepancy into account. Leave the 10 pin standing while playing right-handed, and the game will suggest that you stand to the far right of the lane. Throw from there using the regular controller, and your ball might cling to the edge of the lane before hitting its target. Try it while playing with the Move controller, and your ball will drop unceremoniously into the gutter the moment it leaves your hand, and even edging a step or two to the left isn't always enough to remedy the situation. Furthermore, while it's relatively easy to bowl consistently in regular play, adding the Move to the equation makes controlling the speed of your throw difficult at best. If you perform what you feel is the exact same motion two times in a row, then you might end up with a 20mph shot followed by a 5.5mph shot--that's not a huge deal if you're bowling in a straight line because you still hit the same target, but if you're attempting any kind of hook shot, it's often the difference between a great shot and a gutter shot.

There are a number of different factors that play a part in the accuracy and speed of your shot, of course, including the speed of your throwing motion and the timing of your release. One factor that you're unlikely to take into account until it's brought to your attention with an error message after a particularly bad throw, though, is that your motions need to correspond with those of your onscreen bowler. That's right; your movements in no way dictate the movements of the guy or girl onscreen. Rather, you push a button to start the animation and then you time your movements to correspond with it. It's an awful system that's even worse with the Move than it is in regular play because should the camera lose sight of your Move motion controller for even a split-second, the animation skips forward. If you mistime your throw, then you either get to try again or, more often than not, watch your ball trundle down the lane so pathetically slowly that you wonder if its momentum will even be enough to knock the pins down. Sadly, the best thing that can be said about Brunswick Pro Bowling's Move support is that it's optional.

If you arm yourself with a regular controller, there's no reason you can't have a good time bowling with up to three friends either locally or online. Online play works especially well because rather than having to sit and wait while your opponents take their turns, there's a timer on every shot and you all throw simultaneously. You can see how your opponents' scorecards are looking at all times, and there are even alerts that let you know when they've made or missed a spare, for example. The Spare Challenge mode is also fun with friends; here you're presented with 10 different spare leaves and must convert them in as few attempts as possible. If you make the spare with your first shot, you get 1,000 points; your second and third attempts are worth only 500 and 250 points, respectively. When playing solo, this mode is also one of the better ways to practice before diving into your Career mode.

Starting out as an unnatural-looking amateur bowler--chosen from a roster of eight with varying attributes--Brunswick Pro Bowling's Career mode challenges you to make it as a top professional by competing in 20 different leagues, 20 different tournaments, and against 20 different rivals in one-on-one challenges. Predictably, despite the fact that there are 60 different events, there's still not much in the way of gameplay variety. The main reason to keep playing, at least in theory, is to unlock better clothing and accessories that bestow significant attribute boosts. Shirts, pants, shoes, hats, glasses, and wrist guards can all be upgraded as your career progresses, and by the time you reach the pro competitions, your strength, accuracy, and hook ratings are likely to be much higher than they were when you started out. The problem, besides the mostly generic-looking gear not being much of an incentive to play, is that even the amateur competitions can be tough to win. If you're averaging a score of less than 140 per game, you're probably going to hit a wall before your career really gets going, and because the gear with stat bonuses doesn't become available to buy until later, any prize money that you manage to accrue doesn't help. In other modes you have the option to have bumpers on either side of your lane, but they're not available in Career.

If you're something of an accomplished bowler for whom scores around the 200 mark pose no challenge, on the other hand, you might find that Brunswick Pro Bowling offers a level of challenge and detail that suits you just fine. You enter each match with three balls that have different revolution ratings, and you can check the oil patterns of the six different alleys with the push of a button if you feel like you need to adjust your approach. Like the pins that you're attempting to knock down, balls with different ratings behave much as you'd expect them to, and while it's difficult to evaluate how accurately the oil patterns affect ball behavior, they do at least make a difference. With significantly better Move support, a more accessible Career mode, better multiplayer options, and less dated-looking presentation, Brunswick Pro Bowling could've been something approaching a 300 game for fans of the sport. As it stands, though, Brunswick Pro Bowling is a game of missed spare opportunities. 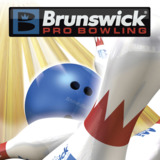 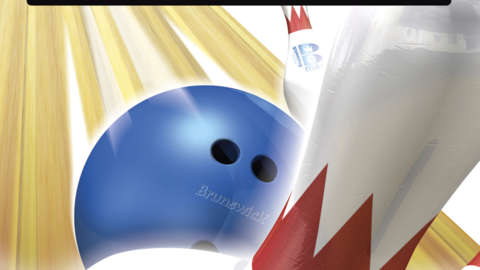 Brunswick Pro Bowling brings realistic bowling to home consoles, offering a variety of customization and accessories, as well as a career mode.