The severe shortage of things to do and an embarrassing lack of insight keep Brooktown High from being a fun or interesting look at high school life.

While a multitude of dating simulations have allowed the socially awkward to live out their romantic fantasies in Japan, the genre never really caught on here in the US, which is a big part of what gives Konami's Brooktown High for the PlayStation Portable any of its appeal. Similar to the voyeuristic thrill of watching little suburbanites toil away in The Sims, the idea of playing the part of a high school senior juggling his or her social and scholastic obligations is intriguing. This promise is squandered in Brooktown High, which suffers from really awkward pacing, is sorely lacking in content, and leans on the most unimaginative high school stereotypes this side of an early '80s teen comedy.

You start the game as a fresh transfer from Ohio to Brooktown High School, an institution where overbearing cliques of jocks, nerds, preps, and rebels define the social landscape and the actual schoolwork is primarily a means for fitting into one of these cliques. After choosing your gender, you'll take a MySpace-style questionnaire that defines your initial stats and your starting allowance. With gender limiting who you can date and who you can just be BFFs with, the game plays pretty much the same regardless of which sex you choose. From here, you'll run though a light character-creation process before being dumped right into your first day of school, where a very predictable pattern quickly develops.

Every Monday morning, you'll wake up at 8:00 a.m., and if you know what's good for you, you'll head straight to school. Classes don't start until around 8:30 a.m., but that precious half-hour, which plays at a highly accelerated speed, is some of your most significant social time in the game. Here, you'll find the entire population of Brooktown High, which consists of just 20 students, wandering around the halls. You can walk up to anyone during this time and start chatting with them, which will bring up a standard multichoice dialogue tree. What you say here, or in any of the conversations you have in the game, will play a large part in what this student thinks of you. Since there's very rare benefit to being loathed by anyone, all your conversations turn into guessing games of what you think people want to hear based on their apparent clique affiliation. Pick the right answers, and you'll get a boost in both your confidence and your overall popularity. Through these conversations, you'll occasionally earn tidbits of personal information, as well as phone numbers and the occasional date. Aside from the fact that everyone fits so snugly into their clique affiliation, the worst part of these conversations is how quickly they begin repeating. You can expect to have the exact same conversations with certain characters at the beginning of the year as you will at the end.

Students will also ask for favors during these before-school chats, which, if completed, can earn you additional confidence and popularity boosts. The favors can be as benign as buying something off the Internet for them or asking another student if they like them, though they can also be quite divisive, requiring you to do something nasty like spread rumors about another student's promiscuity or post compromising videos of them on the Internet. Though you can usually recover from any bad blood that gets spilled with a little sweet-talking, it's usually not a good idea to betray someone whom you've already built up a good relationship with. Hey, just like in real life!

Running around the hallways is a little awkward because your character movement is so twitchy, and students often stand so close together, it can take a few tries before you finally engage the person you wanted to talk to. If you're looking for a particular student, there's no predicting where they'll be on the school grounds. The time limit is the real killer, though, because once the second bell rings at 8:30 a.m., you'd best make a mad dash to class, as the halls of Brooktown High are patrolled by a somewhat terrifying robotic hall monitor that will electrocute any students it finds in the halls. Brooktown has a pretty bizarre curriculum, consisting of just four classes--physical education, French, art, and physics. What's weirder is that the students get to pick which class they want to attend a week at a time. The class you choose to attend will boost one of your four primary stats--originality, athletics, smarts, and charm--which will determine who will find you attractive. While the game is pretty transparent in how it encourages you to pick a clique, it's not hard to keep all of your stats high enough to stay on good terms with everyone. The fact that you as the player don't actually get to do anything while in class seems like a real missed opportunity.

Same goes for your Friday after-school activity, which can either be a part-time job or an academic club. Jobs make you money while clubs help you maintain a good grade in one of your classes; but again, after choosing the activity, you don't actually get to do anything. You have basically all day Saturday for yourself, though in a developing pattern, there's not much to fill the hours with. You can spend time studying to improve your grades, or you can chat on the phone, possibly setting up a date for later in the day, if you didn't already set something up on Monday morning. Dating isn't much different from any other conversations you'll have in Brooktown High, though if you play your cards right, there's the promise of a kiss at the end of it all.

In your bedroom there are also three stat-boosting minigames you can play. BoogieTron 5000 is a lame Dance Dance Revolution knockoff, 21 Knickers is strip blackjack that you play against the computer, and Tongue Twister is a disgusting kissing game where the screen is filled with two gigantic tongues flapping at each other while inappropriate slurping noises play in the background. The games themselves get old quick, and their benefit is so marginal that you'd have to play them over and over again to see any real results. At 6:00 p.m. Saturday, the week is over, and you're back to 8:00 a.m. on Monday morning. The only permutations you'll find from week to week over the course of the school year are the Winter Formal, the Spring Fling, and Prom, which are really just fancy dates. With nothing really changing from week to week, and without much to actually do, Brooktown High gets tedious quickly.

And it's not like the game gives you a lot of great stuff to see and hear to pass the time. While the game does a good job of evoking a prototypical suburban high school with its simple visuals, the characters all look vaguely similar, and you'll see the same half-dozen locations over and over again. There's a smattering of passable voice work, as well as a surprisingly good soundtrack with cuts from The Futureheads, The Velvet Teen, and Dashboard Confessional. Again, though, the constant repetition undermines any inherent quality. On top of all this, the game is shouldered with some pretty severe load times, which do nothing positive for the game's pacing.

Once you reach the end of the school year, you're provided with a quick summary of how the rest of your life panned out based on your cumulative actions in the game. How long it takes you to get through the school year can vary pretty wildly depending on how much time you spend toiling over your character's stats. Either way, it's apparent that the game really wants to be played through multiple times to see the different possible outcomes, but it's unlikely that you'll want to play through the game more than once, if even that. Without enough to do, Brooktown High ends up being as shallow as the lame caricatures that populate it. 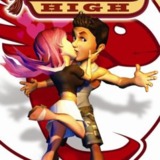 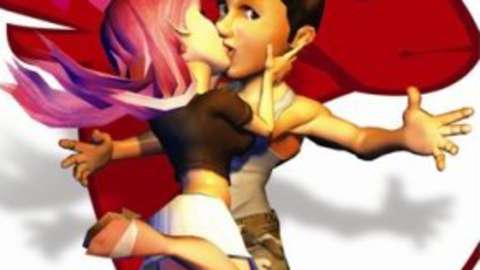 Brooktown High: Senior Year is a dating sim for the PSP.