If you are a Bruce Campbell fan, Broken Helix is worth the ticket price for his tough-guy histrionics alone.

Konami's Broken Helix presents a complex web of plotlines in a 3D shooter/adventure whose shortcomings in control and graphical clarity are made up for by the game's narrative twists and tough real-time challenges.

Something is amiss in Area 51. You're sent in as a one-man bomb squad with 20 minutes to diffuse two explosive devices. That taken care of, the plot not only thickens, but splinters off into four distinct lines, and which line you follow will determine how you play the game: You can aid the marines or work against them, and you can play as a human or follow a more peculiar route. You must piece the story together from fragments of speech overheard on your comm unit, and by talking to various scientists and military personnel inside the base - much of which is genuinely funny, thanks to Bruce Campbell's deadpan voice acting.

The clock is ticking throughout the game, sometimes onscreen, sometimes not. Just when you've established a satellite link, reopening communication with the outside world, the marines who've betrayed you are already two levels up and hot on your trail. This time function is touted by Konami as part of its "4D engine," and as ridiculous as this half-baked PR invention may sound, the pace of Broken Helix makes for white-knuckle gameplay.

The game's control is a little sketchy. The standard Doom configuration, with rotation as well as strafing, feels a little loose here, so the learning curve is fairly high. In addition, the AI has a tendency to freak out at certain critical junctures. For example, if you are assigned to clear out levels of zombie-aliens in a small team of marines, and their mad dog sergeant will kill you if he's doing more than his share of the work, it is extremely frustrating that the entire team freezes if you so much as nudge one of your peers or block his path.

Further complicating control issues are the game's dim and sometimes vague graphics. The overall darkness of the game does much to augment its bleak pre-apocalyptic tone, but when pursued by the disembodied head of an alien, it's nice to see it before it bites your kneecaps off.

If you are a Bruce Campbell fan, Broken Helix is worth the ticket price for his tough-guy histrionics alone. Despite its graphical difficulties and control issues, the replay value of the game's four distinct storylines, and the challenge you'll find in unraveling them, make it worthwhile to any 3D shooting fans. 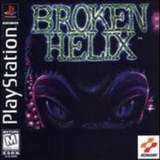