It's becoming apparent that strategy/RPGs are quickly entrenching themselves as the genre du jour. After the success of titles like Tactics Ogre, VandalHearts, and, of course, Final Fantasy Tactics, Atlus has finally brought a true 32-bit strategy/RPG to the PlayStation. Brigandine is best described as a cross between Atlus' own Ogre Battle and Sega's Dragon Force, two excellent games for sure, but does it capture the best elements of its direct descendants? Maybe not.

In the beginning of the game you can pick one of five different characters, ranging from princes to warlords, that you will control during the course of the game. Once that's out of the way, the game switches to an overhead map that you will traverse through simple menu selections. Brigandine features tons of text that you'll need to scroll through before engaging in your first battle. Once you've found yourself engaged in mortal combat, you'll switch to the long-standard hexagonal grid setup found in most old-school strategy/RPGs. Although the sprites are nicely detailed, the resulting effect can be kind of confusing when all the combatants are bunched up together, making it difficult at times to properly tell who's who. Like a complex 32-bit chess game, Brigandine switches to a fully polygonal battle engine every time you attack someone. Strictly first generation, these graphics certainly do little to spice up the overall proceedings. Rather, these scenes quickly become tiresome due to their slow loading times and dull designs. Of interest, however, is that the size of each character is proportionately represented in the game, unlike games where sprite-based encounters affect little in the game. In Brigandine, a dragon will be substantially larger during a battle scene than, say, an archer.

In its defense, Brigandine offers plenty of replay value for those who have the time (and patience) to commit to this game. With five main characters to play as, each with his own special items and sub-missions, there will be much playtime logged in before you've seen everything in the game. Like any good strategy game, you can also upgrade the levels and class of your soldiers and monsters as you progress. In addition, the game is peppered with CG sequences that reveal the characters in action, but the sequences are really nothing more than gratuitous eye candy. Additionally, the soundtrack is adequate but nothing more than your basic medieval backdrop.

Unfortunately, while not really a bad game at all, Brigandine screams mediocrity. To be quite honest, it's puzzling why Atlus chose to bring over this tedious RPG from Japan where it was greeted with lukewarm success. While the game commits no great crimes against nature, it takes a committed soul to make his way through this tepid quest. Not nearly as good a strategy/RPG as Shining Force III, or even Atlus' own Kartia, Brigandine is best rented before you buy. Not a bad game, but not quite good either; polygonal battles not withstanding, you really need something better than this to separate yourself from the pack these days. 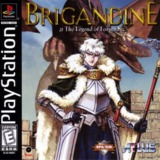