Bridge Constructor Portal leans heavily upon its iconic forebears. GlaDOS, an uncaring-though-humorous AI, greets you at the beginning of many levels, setting the stage for the plentiful puzzles that lay before you. It sounds like the setup for another delicious brain-teaser that will tickle your funny bone while pushing your logic muscles. But neither the story nor the puzzles capture your imagination, resulting in a predictable slog that grows more tedious the deeper you get into the adventure. Even worse: I encountered a game-breaking bug that completely halted my progress at the home stretch.

The story in Bridge Constructor Portal is little more than a collection of references to the previous Portal games. GlaDOS is back to make light of your shortcomings, but her insults feel like diluted copies of familiar quips, lacking the clever tongue-lashings that she used to so easily dish out. She's there to greet you with an insult at the beginning of some stages, and then you're left on your own in a bleak and bland test chamber. Periodic cutscenes borrow familiar artifacts from previous games, but do little with these props other than make you fondly remember happier days. During one such segment, a picture of Portal's famous cake appears on a computer screen while an instrumental version of "Still Alive" plays over the loudspeakers. This scene means nothing if you aren't familiar with that game...and it's just a quick nostalgia jab for those who are.

As the name implies, Bridge Constructor Portal has you building a series of bridges in the facility made famous in Portal. The goal is to guide a self-driving forklift full of cute little stick figures from the entry point to a faraway exit--all while avoiding turrets, leaping over acidic lakes, and triggering switches. Building a bridge is no easy task, though; physics are a constant and punishing presence, forcing you to consider the impact of gravity as you build rickety structures. With only metal planks and guy-wires to hold your contraptions in place, you have to make smart use of your materials to ensure that the entire structure doesn't topple as soon as you begin.

A handy "best practices" tutorial teaches you the fundamentals of architecture. Build a series of triangles, for instance, to hold a bridge in place, or affix an arch to add even more support for your road. Bolts in the ceilings and walls can bear a lot of weight if you hook guy-wires up to connecting points, but make sure you balance the bridge properly, or it's still going to cause your forklift to crash and burn as soon as it lays its wheel upon the road.

All of the techniques you need are doled out slowly, so it's easy to get a handle on what the game is demanding of you. While you start out building simple ramps and roadways, you're soon sculpting hundred-piece structures that dangle impossibly high in the air. The early going is tense: I would hold my breath as the forklift sauntered across my swaying bridge, hoping that the guy-wires were strong enough to carry the weight. My forklift would often land on a bridge from too high a distance, and I would watch helplessly as it all toppled to the ground. Then it was a matter of going back to work, adding a few more supports and tweaking the angle of ramps, before once again testing my creation.

It doesn't take long, though, before you've seen all of the obstacles Bridge Constructor Portal can dish out. Once you've mastered suspension bridges, oscillating bridges, and angles of incidence, the stages force you to go through the motions to show--once more--the tricks you already learned. The game tries to keep things fresh by injecting obstacles and items from the original Portal game into this one; you'll encounter talking turrets, companion cubes, speed goo, death lasers, bounce pads, flying balls, and (of course) portals. Later levels throw all of these into a single stage, but that only makes the experience more tedious, not more interesting.

The game often confuses complexity with fun, as throwing in more moving pieces doesn't mean you're going to have to think harder.

Bridge Constructor Portal is at its best when it focuses on one or two key ideas. Figuring out how to use a companion cube as a shield to block the laser attacks from a turret took enough clever construction that I was satisfied when my forklift glided gracefully through the exit. But the game often confuses complexity with fun, as throwing in more moving pieces doesn't mean you're going to have to think harder. Rather, it means you're going to spend most of your time making small adjustments, wallowing in small details instead of appreciating the greater whole that surrounds you.

The best part of puzzle games is figuring out how to overcome a tricky obstacle. That's the easiest and shortest aspect of Bridge Constructor Portal, though. Long after you've devised a way through the portals, off the bouncing pads, and past the lasers, you're fiddling around with one small part of the contraption that is close, but oh so far, from the necessary perfection.

A lot of the tedium comes from how editing works. In test chamber 49, for instance, I had to guide my forklift through a series of portals on the right side of the screen while crashing into turrets from behind, and hitting a button that would release a companion cube on the left side. The cube is supposed to knock down three more turrets and hit a switch that opens the exit. The problem is that I couldn't quite get the angle needed to guide the cube to its destination. So I would tweak a ramp, start the level up, and then wait 30 or so seconds until the forklift hit that switch to release the companion cube. Then, I would watch the cube fall, see where my mistake was, and move a ramp a few more pixels to try to get it in the right spot. And then... I'd start the whole process again. Tweak, wait 30 seconds, tweak, wait 30 seconds, tweak. There's no way to start a run from a certain point to iterate on the one problem area, so I went back and forth with this project for a half hour until I finally got it right.

And then the game crashed.

From beginning to end, it took me about an hour to pass test chamber 49. Most of the later stages take 30 minutes or longer to get right, and some took even more than an hour. Losing my progress after spending so much time constructing the perfect series of ramps and bridges was maddening. But I had no time to pout: I jumped right back into test chamber 49, moving quicker than my first time through, and got my trusty companion cube to knock down the turrets and trigger the exit door in about 20 minutes.

And then I ran into an even bigger problem.

Test chamber 50 is much easier than the previous stage, but I experienced a bug every time I reached the exit that forced the game to crash to the Switch OS. I tried to save my work before exiting, crossing my fingers that I wouldn't have to start from the beginning if the game crashed again--but the save function failed consistently, too. So I never got beyond test chamber 50, and never saw the last 10 challenges.

Obviously, a game-breaking bug is a serious problem, but I was tired of Bridge Constructor Portal long before my progress was abruptly halted. This game falls short in just about every area; an amusing story or eye-catching visual design could have at least distracted from the dull puzzles, but you get no reprieve here. The game doesn't even feature any music while you're building the many bridges. Long after you've figured out how to pass a stage, you're still left tinkering with minute portions, adjusting ramps by mere pixels at a time, crossing your fingers that you landed on the exact angle needed to guide a companion cube or bounce a ball of light toward the wall trigger. Instead of testing your puzzle-solving ability, Bridge Constructor Portal just sees how long you can withstand tedium before you want to walk away from the whole endeavor.

Editor's note: GameSpot was informed by the developer that the game-breaking bug mentioned in the review has now been patched. Our original review will remain as is, as a reflection of the game at the time it was released. - Peter Brown, March 27, 2018, 7:30 AM PT

View Comments (43)
Back To Top
4
Poor
About GameSpot Reviews 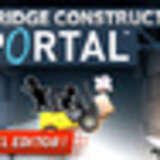 Until a bug halted his progress at test chamber 50, Tom spent 25 hours building bridges and saving stickmen using a complimentary Switch copy of the game provided to GameSpot. 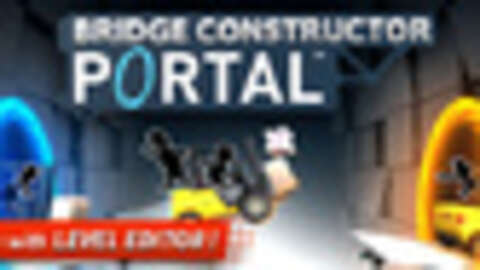