Breath of Fire IV is as solid a game as any of its predecessors.

Breath of Fire IV is the latest in a series of role-playing games from Capcom, a company known more for fighters and survival-horror than RPGs. The original Breath of Fire, which appeared on the Super NES, was actually published in the United States by RPG mainstay, Squaresoft. After its relative success, Capcom took the reins from Square and nurtured Breath of Fire into its own little franchise. Though the Breath of Fire games have never been as well received as bigger RPG names like Final Fantasy, the series' fourth installment indicates that Capcom is definitely learning something about the fine art of RPG development.

The most consistent and recognizable aspect of the Breath of Fire games is its blue-haired main character, Ryu. In Japanese, "ryu" means dragon, and anyone who's familiar with the character will know this is an appropriate name, because Ryu is a dragon boy. Breath of Fire maintains other elements of setting and character between games, such as the kingdom Wyndia, its winged princess Nina, and a population composed of human-animal hybrids. Series fans can rest assured that such Breath of Fire essentials are still present in the newest game. This time, the story has it that Nina's elder sister Elina has vanished, and so she and her man-tiger friend, Cray, have set out to find her. Along the way, they will encounter Ryu, who has no memory of his identity or origins. The adventurers continue the quest to find Elina, and in predictable RPG fashion, they will eventually become embroiled in a quest to preserve the safety of their entire world.

Breath of Fire IV's plot is at the same time solid and standard, and such a notion is pretty descriptive of the game itself. It sports all the trappings of a typical RPG, from magic, armor, and experience points to dungeons, treasure chests, and random enemy encounters. At a given time, your party will be made up of only three primary characters (drawn from a total of six), but the remaining fighters can be rotated into battle at will, which makes the combat a bit more interesting. Furthermore, resting characters regain their status during turns that they sit out, which makes this feature both useful and strategically interesting. The game's combat system contains a couple of other features that set it apart from an average RPG's system. Characters can learn under the tutelage of a "master," who teaches them new skills as their other abilities increase. True to Capcom's fighting roots, a variety of combos are also available, chaining together attacks of different types into chains that do extra damage. Finally, Ryu can transform into a dragon for added attack and magic power, just as in past games. Like the story line, the combat in Breath of Fire IV isn't anything particularly new, but it's reasonably entertaining.

It may seem a trivial point, but Capcom should be commended for the continued use of sprites and otherwise understated graphics in the Breath of Fire games. Party members, townspeople, and enemies are all represented by simple two-dimensional bitmaps that manage as much life and personality as the most detailed polygonal model. Combat graphics are similarly modest; spell effects, camera angles, and other goings-on are effective and to the point. Battles are expedited quite a bit by this fact, and it's nice to see a company not letting graphical extravagance get in the way of gameplay. The game's localization is also of note, because other than translating dialogue and menu text, Capcom basically left things alone. The introductory movie contains the original Japanese spoken narration, and the title screen shows the game's logo written in Japanese characters. For the purist, these are nice touches.

On a final note, Breath of Fire IV contains a lot of minigames. Some are fairly complex, but most consist of simple control pads that you can finesse. You can tap buttons quickly, hit certain directions - that sort of thing. For some, such games will enliven an otherwise slow-paced adventure, but others will find them nothing but an annoyance. They really don't detract much at all from the main gameplay, but even the mighty Final Fantasy took some heat when its landmark seventh installment integrated such minor tasks. Take these minigames as you will, then, and consider yourself warned.

Breath of Fire IV is as solid a game as any of its predecessors. Though it doesn't improve upon the standard RPG formula, it's hard to fault in any specific way. Nice presentation, an interesting story line, satisfying RPG-style gameplay, and above-average visuals combine to make it a good game for the RPG junkie who's already plowed through all of this year's other excellent role-playing games. 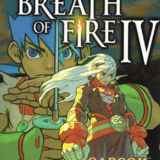