When you first start playing Bound by Flame, you're asked to enter a name for your character--a name that is then summarily ignored by the game's supporting cast, which always refers to your hero by his or her known name: Vulcan. Given Bound by Flame's shallow similarities to The Witcher, it's hard not to wonder what the latter game might have been like if you were asked to name the protagonist, only for everyone to call you Geralt anyway. This identity crisis may seem a minor detail, but it is a head-scratcher of an issue in a role-playing game full of head-scratchers, each one more stymieing than the last. Bound by Flame is the kind of game you might hear people describe as having "a lot of heart," and the game it tries to be is certainly one worth celebrating. Yet by the time this frustrating adventure comes to a close, it's clear that there's a wide gulf between the game you just played and the vision that inspired it.

I can't accuse developer Spiders of not trying. Bound by Flame is an action-heavy role-playing game about choice, and it liberally borrows from the BioWare book of conversation tropes, presenting you with narrative decisions now and again that affect allegiances and spawn conflicts, most of which can be solved only through swordplay. Vulcan is an apt name for the game's central character. He (or she, if you choose a female avatar) is a member of a mercenary group called the Freeborn Blades, but in the midst of fighting to stave off an invasion of undead creatures called deadwalkers, he finds himself sharing his brain with a growling demon. Vulcan's mind becomes rather overcrowded as a result, but at least the demon grants him the ability to conjure fire, bringing sense to his mythology-inspired moniker.

Bound by Flame's most intriguing choices are those that see Vulcan deciding whether to bend to the demon's whim or assert his individuality, and the more you side with the demon's advice, the more you take on stereotypical demonic traits. The Fable series allows for a similar metamorphosis, but the changes are even more ferocious in Bound by Flame's grim fantasy world. As I faced the final battle, a scrawl of reddish runes had been etched into my blackened chest, from which flames poured out; I had not one, but three sets of curled horns growing from my head; and my voice had taken on a diabolical rumble as the two competing identities became further intertwined.

The consequences of your decisions aren't just cosmetic: growing horns means you can't wear helmets and thus reap their defensive benefits, but you do gain enhanced magic power regeneration by way of compensation. There are other trade-offs, as well, but mutating into a fiery fiend was such a delectable experience that I never regretted taking that path in spite of my usual goody-two-shoes proclivities. To be sure, there are choices to make in Bound by Flame's story that have nothing to do with the demon within, but narrative choices are most effective when you're invested in the potential consequences, and the game's poor dialogue and characterizations aren't apt to make you care about anyone's fate but your own.

Take, for instance, the scholar called Sybil, who might need to cope with great loss depending on a decision you make early in the game. The inexpressive writing and voice acting keep Sybil's story from tugging at your emotions, and when you take her to collect three books later on, her ability to relate information immediately, without having to actually read those books, is dumb. Characters are introduced one after another, and many of them are available as battle companions, though you can only invite one to your adventure at any given time. The roster includes a sharp-tongued mage, a prim-and-proper zombie type, and a suicidal knight. They have tales to tell if you ask them, but hearing their stories is like hearing someone recite CliffsNotes: your companions become lecturers, and you wonder if you need to grab a notepad in case there's a test later.

Over time, the narrative problems compound so greatly that you can no longer take any occurrence seriously. Transitions from gameplay to cutscenes are jarring, with characters repositioned instantly, and often performing wholly different actions in one moment than they were in the last. Other times, your companion simply disappears once a battle is finished, and the story takes over, an occurrence that proves highly distracting when the lack of witnesses to a particular event is a plot point. (I had a witness--she was with me the whole time!) The tone seesaws wildly, with your conversation partners cracking jokes at the oddest moments, and Vulcan suddenly acting like a jerk or dropping an f-bomb for no apparent reason. When the final hours asked me to make a sacrifice, I made the decision arbitrarily because none of it mattered to me. I simply had no interest in the barely there companions that fell in battle in mere seconds as if they were made of papier-mache.

Bound by Flame's most intriguing choices are those that see Vulcan deciding whether to bend to the demon's whim or assert his individuality.

Your companions' ultimate uselessness in combat is only one of Bound by Flame's curse-inducing flaws, almost all of them centered on the game's battle system. Yet the combat is initially pleasing, allowing you to switch between a ranger stance, which opens up speedy dagger attacks, and a warrior stance, which has you swinging overbearing two-handed melee weapons such as axes and swords. You can also sneak up on foes if you're so inclined, though the demon's pyromancy skill set, which allows you to toss fireballs and infuse your weapon with glowing flames, is an even greater boon than the stealthy option. Vulcan's muscular swings and acrobatic windups give the swordplay a nice sense of heft, and each school of battle--warrior, ranger, and pyromancer--comes with its own skill tree, a system that inspires you to make thoughtful customization choices that fit your preferred combat style.

Bound by Flame then proceeds to ruin its promising combat with a series of mind-boggling choices that suck out all the fun and turn battles into an aggravation. Small areas are populated with archers, ultra-hardened duelists, and frost spirits with all manner of icy spells they like to bombard you with. Throw into the mix an ineffective companion, an unreliable target lock that abides by no comprehensible rules, and a camera that can't always frame the close-quarters action, and you rarely have the proper tools to form a strategy. To make matters worse, every successful attack serves as an interruption, at best disrupting you mid-swing, and at worse knocking you on your derriere.

A sample battle: You and your magician companion Edwen enter a small combat arena to face numerous deadwalkers. You immediately rush to the opposite end of the arena, because you enter battle at a narrow choke point guaranteed to serve as your coffin should you choose to remain there. Meanwhile, Edwen succumbs to her attackers within 60 seconds, unable to hold her own even while you whale on the golems, specters, and spirits surrounding her. You manage to get in a few successful swipes before you get caught up in a series of attacks that trap you in a string of recovery animations. Once you regain control, you run down a connecting corridor hoping to lure an ice spirit away from the crowd, but in doing so, pull her too far away from the confined territory she is leashed to. The spirit returns to her home and regains full health, and your fallen companion comes to her senses, which is at least some comfort, since leaving the scene of battle (or finishing the battle) is the only way to revive her.

Combat then becomes a matter of exploiting defects, not one of finding a proper rhythm. Is a boss fight getting you down? Strafe around your foe, leading him in circles until you have regained enough health or mana, and then unleash another round of attacks. That's not very fun, but it's effective. Eventually, you learn a few helpful techniques, and the combat at least becomes bearable: you learn to lay the explosive traps whenever possible, you learn the best timing for blocking and parrying, you learn when to kick an enemy and interrupt his attack, and you learn how far away you can lead enemies before their invisible leashes pull them back. (And that leash radius is frustratingly small in most cases.) But even after you grow accustomed to the game's pitfalls, battles remain a drag, not because they are challenging, but because they are cheap. The combat areas were not created with enemy behavior in mind, and the enemy behavior wasn't created with player combat timings in mind. There is no shame in playing Bound by Flame on the lowest difficulty--and there is no fun in playing on the higher ones.

Bound by Flame ruins its promising combat with a series of mind-boggling choices that suck out all the fun and turn battles into an aggravation.

In between battles you might head back to camp to grab one of only a few side quests, all of which send you back into the same bland corridors in which the main quests occur. You may also check out the game's crafting system, which is its most robust element. All of the loot you grab on your travels is useful, either directly ("Hey look, I found a new pair of greaves!") or indirectly ("I can use this tainted blood to make potions!"). Raw elements can be combined to make other elements, which in turn can be combined to make useful items like traps or to bolster your equipment so that (for instance) you take less cold damage or increase your chances of a critical hit. Refreshingly, you can stop to craft at any time--even in the middle of the excruciating final boss battle.

By RPG standards, Bound by Flame isn't a very long or expansive game. If you don't consider the battles you must repeat, the adventure is around a dozen hours long, and there is no world to explore, unless you consider a few medium-size levels made up of twisting hallways to be a world. Bound by Flame shoves too many ideas into its cramped boundaries, thus giving none of them the room they deserved to blossom, and thereby allowing the flames to burn the joy away.

View Comments (875)
Back To Top
4
Poor
About GameSpot Reviews 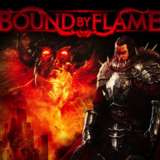 Kevin likes an ambitious role-playing game, but after swearing his way through Bound by Flame's second half and vanquishing the final boss after countless tries, he's glad to leave this one behind. He finished at level 23 and spent most of his skill points in the warrior tree. 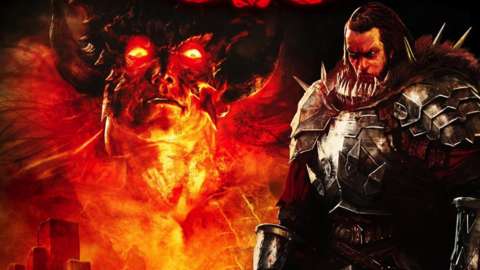 Bound by Flame is an action role-playing game that lets you play as a mercenary posessed by a flame demon in a dark fantasy universe.