Jack in a box.

As famed gun merchant and narrator Marcus Kincaid would say, Borderlands is about stories: tales of villains and antiheroes, of weapons and treasure, and of course, of mysterious vaults safeguarding fantastic riches…or unspeakable horror. So the legends go, at least. But one tale in particular has stood among the rest. It is about a man named Jack, who rose from the position of programmer in a weapons manufacturer, to self-declared dictator of a hostile arid planet known as Pandora. It is his story that is the focus of Borderlands: The Handsome Collection, a console-only package including the series’ most recent cooperative first-person releases, complete with updated graphics and enough additional content to sink Wam Bam Island.

Though I find it unfortunate that the original Borderlands isn’t included, it’s not like The Handsome Collection is wanting for content. There is a ton to see and do here, with Borderlands 2 encompassing the lion’s share of what’s stamped on the disk. Together with The Pre-Sequel, the games come paired with numerous add-on packs that include side campaigns, challenge arenas, character skins, upgraded level caps, and four additional vault hunters--two for each game. The amount of extras is incredible, especially considering that both games are lengthy on their own, coming in at several dozen hours each. And that's not even counting true vault hunter mode, which allows you to replay the campaigns at a higher difficulty for a chance at rarer loot. The included season pass for Borderlands: The Pre-Sequel means that not only do you have access to content currently available, but also future add-ons, including Claptastic Voyage, the first campaign add-on for The Pre-Sequel which launches the same day as The Handsome Collection.

If you have yet to experience the side missions in either game, it’s imperative to note that some of the DLC takes place canonically after the events of their main campaigns. So keep that in mind if you want to avoid any unnecessary spoilers. In addition, if you have already played either of the two games, The Handsome Collections allows you to transfer your save files from the older consoles within the same console family (Xbox 360 to Xbox One, PS3 to PS4).

Borderlands 2 does little to change the classic Borderlands formula of shooting and looting, bringing more evolution than revolution. The game reintroduces Pandora as a more engaging world, bringing in nastier enemies as well as a host of lovable characters, most of them sane enough to lend some help or provide small quests, but eccentric enough to make you wonder if their harsh lifestyles warped their minds. The writing is given a fresh kick, bringing vigor to the vault hunters and Pandora’s citizens with fantastic and often hilarious dialogue, which effortlessly has you swaying from grins to belly laughs and back again. Though the characters are chattier, there is a downside: Conversations tend to bleed into each other, and you often miss what’s being said. However, you usually get the gist of what’s going on from updates to your mission status. The blistering combat is the one thing that remains mostly the same, and it is still tight and satisfying, with multiple enemy variants and imposing, memorable boss battles.

Other than the allure of gathering the best loot around, Borderlands 2 also keeps your interest high as you’re challenged to create the most powerful vault hunter possible. Experience points are doled out following kills and completed missions, and with each level gained you are given a skill point to develop new or existing abilities in your vault hunter’s skill tree. Some of these skills favor supporting solo or cooperative play, while others passively enhance base stats such as critical hit damage or health recharge rate. You also have several skills that improve your vault hunter’s action skill, his or her signature move. Completing challenges as you move through the game awards you with badass tokens, which you spend on giving your characters--all of them at once--small attribute boosts.

More importantly, not only to the plot of Borderlands 2 but to the collection in general, the game is the first to introduce the violent and sarcastic villain--and Hyperion CEO--Handsome Jack. It’s clear from the game’s explosive onset: Jack is one seriously bad guy. But he also commands one of the game’s most memorable roles. His mockery of the vault hunters, though incredibly amusing, is tinged with darkness. Yes, you will chuckle at his antics--one in particular related to a diamond horse he lovingly names Butt Stallion still gets me. Yet that laughter becomes a nervous chuckle as Jack details a time he pulled out a man’s eyeballs with a spoon as his family watched in horror. Jack is all too obliged to flex the military arm of Hyperion, sending waves of robot attackers to take you and your fellow vault hunters down for good.

Borderlands: The Pre-Sequel's story takes place between the first two games, but builds itself on top of the groundwork laid out by Borderlands 2, yet with a fresh, gravity-defying twist. The game takes you on a brief tour of the ominous Hyperion space station before sending you to Pandora’s cold, fractured moon of Elpis. The oxygen-free environments provide a different challenge to overcome. Your survival relies on Oz Kits, which provide not only a supply of precious oxygen, but act as a jet booster to lift you high into the air and allow you to return to the ground in a thunderous butt slam. The decreased gravity completely changes how you approach combat, allowing both you and your enemies to battle from both the ground and floating through the air. It requires you to remain cognizant of not only what’s in front of you, but also on dangers above and below. The updated combat is enthralling; It’s familiar enough to naturally dive into, while the high-flying escapades prevent it from growing stale.

With The Handsome Collection, I looked forward to the chance of experiencing The Pre-Sequel’s campaign once more. After all, the game weaves the humorous tale of Jack’s rise from a Hyperion programmer to its nefarious head honcho. But even though I once more savored the feeling of lazily swimming through vacuum, popping the heads of enemy scavs, I realized I wasn’t enjoying my return visit to Elpis. When I reviewed The Pre-Sequel late last year, one of my critiques involved mission pacing, and how some quests became tiresome ventures. Indeed, several missions are either overly lengthy, or feature moments of too little inactivity. When compounded by a drop in speed due to the weaker gravity, the sense of urgency is damaged.

I hesitate calling the The Handsome Collection "remastered," regardless of how often the word is printed on the game box. (That number is three.) It hasn’t received the sort of intense graphical overhaul as, say, Final Fantasy X/X-2 HD Remaster, and it’s not as if the games required it. Borderlands 2, the older of the two games, was released in 2012, hardly long enough ago to cultivate even a modest patina to be scrubbed clean. Instead, it’s far more honest to say that the games have been unshackled, released from the technological restraints of the aged Xbox 360 and PlayStation 3. In other words, what The Handsome Collection offers is nothing that hasn’t been seen on a high-end PC.

But that doesn’t mean the visuals are not deserving of your attention. The aesthetics for both games, The Pre-Sequel in particular, are marvelous in The Handsome Collection. Borderlands’ traditional cel-shaded design is crisp, with bright colors that burst with life. You can almost feel the heat rising from one of Pandora’s many deserts, and my return to the lovely tropical-flavored Wam Bam Island was made even more spectacular thanks to the sharper graphics. And I dare you not to stand in awe of Elpis’ twinkling, starry canopy, or the multi-colored mists slowly rising from its ocean of ice-cold methane.

Sadly, those gorgeous lunar vistas do come with a cost. The Handsome Collection boasts a video output of 1080p running at 60 frames per second, and that holds mainly true for Borderlands 2, which mostly performs at a buttery smooth pace. But if Borderlands 2 is analogous to creamy butter, then The Pre-Sequel is more akin to the peanut variety—the chunky kind. You won’t notice the frame drops so long as you’re within smaller, enclosed spaces. Walking outside grants you a far clearer understanding, as if the game is softly applying brakes. In larger, detailed areas, as well as during intense battles, performance hits are common enough to become distracting, able to pull you out of the mood time and time again. The problem is exacerbated when running The Pre-Sequel in split-screen multiplayer, with slowdown occurring at nearly every interval. Normally, the game is set to run at 30 FPS for up to four screens, but I was lucky to get that on most occasions. I only ran it with the game split between two players; I’d hate to see what happens when it’s doubled.

In the spirit of fairness, Borderlands 2 isn’t completely in the clear, itself. Frame rate noticeably drops during moments of heavy combat; however, it isn’t comparable to the turbulence found in The Pre-Sequel. It’s a fleeting, almost unexpected thing, sticking around only long enough to make you think “Oh?” before vanishing completely. In my first 10 hours into Borderlands 2, the frames dipped only a few times, which did not harm my overall enjoyment to the extent that The Pre-Sequel could muster.

The Handsome Collection is still a great compilation, allowing you to witness not only Jack’s tale, but play a major role in shaping the history of Pandora itself, along with its lonely moon.

The audio remains the same quality, though it’s hardly lacking by any definition. Both games star extravagant weaponry, all of which can be easily distinguished by your ears alone: sniper rifles and shotguns shatter the calm Pandoran air, while laser guns pop and sizzle over Elpis’ cragged lunar surface. Most of the voiceover work is fantastic, with a special nod going toward Dameon Clarke as the sassy Handsome Jack himself. The Western-inspired soundtrack of Borderlands 2, with music composed of wind flutes and the soft plucks of acoustic guitars, is as delightful as I remember. Sitting on the opposite end of the spectrum is The Pre-Sequel’s album of synthesized digital tunes, which doesn’t quite stand out as readily, but keeps well to the game’s overall futuristic tone.

Let’s be clear: You don’t have to be Handsome Jack’s number-one fan to appreciate Borderlands: The Handsome Collection. But even if you’re not, you will still find an impressive archive, chock full of dozens upon dozens of hours of laughter and exciting combat. Even considering issues presented by Borderlands: The Pre-Sequel, The Handsome Collection is still a great compilation, allowing you to witness not only Jack’s tale, but play a major role in shaping the history of Pandora itself, along with its lonely moon. And that is a story that Marcus may gladly tell again someday.

Borderlands: The Handsome Collection is featured on our list of the best Xbox co-op games and best split-screen PS4 games list.

View Comments (98)
Back To Top
8
Great
About GameSpot Reviews 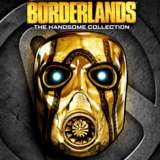 Cameron Woolsey has carved a legacy for himself on Pandora and Elpis. He has slipped into the shadows as a haiku-reciting cyber ninja, and annoyed the hell out of his allies as yammering, wheeled trashcan robot. With The Handsome Collection, he plans on doing it all again, while looking forward to his next adventure on Pandora.