Boogie's gameplay mix of singing and dancing is an interesting idea, but it's poorly executed.

The Wii has already seen its share of unique games, and this trend is certain to continue as developers start creating more games specifically designed to take advantage of the system's motion controls. One such game is Boogie, EA's first game built from the ground up for the Wii. The game's premise, which has you sing, dance, and even create your own music videos is an interesting one. However, an interesting premise does not necessarily make for a great game. Such is the case with Boogie. Using the Wii Remote to "dance" isn't that interesting, the karaoke doesn't work very well, and the tracklist isn't likely to appeal to the younger audience the game is geared toward.

There are five playable characters in Boogie, each with five playable chapters and a nonsensical storyline. While the characters may look interesting, their stories certainly aren't, thanks in no small part to the cutscenes, which aren't animated and have no voice acting. Some chapters will have you sing, but most of them are dance only. If for whatever reason you don't want to sing, you can play without a microphone and the karaoke chapters will have you dancing instead. Other than earning credits to unlock a few songs and some new clothing accessories, there's no point in playing the story mode. Once you've unlocked the songs, you can choose to either sing or dance to them from the main menu. With the game's music video feature, you can record a singing or dancing performance, as well as spice it up with camera cuts and a limited number of effects. The editing tools are simple and easy to use, but you can still get some nice results with minimal effort.

Boogie starts off with a tutorial that gives you the basics on getting down. You move your character around the level with the Nunchuk's analog stick or the remote's D pad. All you have to do to dance is move the Wii Remote left, right, up, or down in time to the music. What happens onscreen loosely correlates to the movement of the remote, so if you move it down, your character will usually do a move that involves crouching or spinning on the floor. If you shake the remote to the right, your character will move to the right of the screen. You'll want to avoid repeating the same moves too many times in a row because if you do, your score will go down. But this isn't much of a problem because you can string together combos with ease by performing consecutive moves on the beat. The speaker on the Wii Remote acts as a metronome, and there's also a visual indicator on the screen to help you stay in time to the music. The more moves you time properly in a row, the higher your score. As your score increases, so does your boost meter. Once you've obtained a bit of boost, you can hold down the B button to trigger a series of arrows at the bottom of the screen. If you follow the pattern correctly, your character will perform a special dance move that will net you big points. You can play the game with only the Wii Remote if you like, but if you're using the Nunchuk, the boost meter will also let you perform poses. All you've got to do to strike a pose is hold down the C button and move the Nunchuk to line up the onscreen cursor with the target.

That long explanation can be boiled down to this: Wave the remote around and you'll win. You'll have much more fun if you get out of your chair and really dance while you move the controller, but it's not necessary in the least. Even on the hardest difficulty setting, the game is absurdly easy and requires minimal skill or rhythm. There's a party mode where you can have a dance-off with a friend, but the addition of freezing and reversing icons doesn't do much to make it any better than the single-player game.

Dancing is only half of Boogie's gameplay because you'll also get to show off your pipes in karaoke mode. It's quite similar to the Karaoke Revolution and Singstar games. The lyrics run across the bottom of the screen and the pitch is represented by horizontal bars. A cursor shows the pitch of your voice relative to the actual song, and all you have to do is hit the right notes to earn points. Actually, that's not true at all because the karaoke part of the game is essentially broken. Like other karaoke games, you don't have to sing the proper words--that's nothing new. What is new, however, is that you don't even have to sing. You can whistle bird calls, tap the microphone, blow into it, rub it on your shirt--anything you can think of--and still pass. Basically, if you're alive and breathing, the game thinks you're the next Frank Sinatra.

Nearly every song in Boogie could be considered a karaoke staple. But it's an odd, mostly older mix of songs for a game that's seemingly geared toward the younger crowd. Only a handful of songs, such as "Fergalicious," "SOS (Rescue Me)," "Let's Get it Started," "Don't Cha," a few Britney Spears songs, and a couple of other tunes are from the past 10 years. The rest of the songs are much older, and there's an emphasis on '70s hits, such as "ABC," "Brick House," Celebration," "Le Freak," or "Love Rollercoaster." All of the songs sound like they're covers and slightly remixed (and censored) versions of the original, so if you're looking for the real songs, you'll want to look elsewhere. Many of the songs sound like they've been shortened a bit, which is understandable if parts with no singing are cut out. But some songs, such as "Dancing Machine," still have extended sections with nothing to do. You can use the controller to dance while you sing, but you're not awarded any points for it, so there's little point.

At least Boogie is a nice-looking game. The character designs are well done and fit the personality of each character. Individual dance moves are animated nicely, but they don't always flow well from one move to the next, and it would be nice if there were more variety. The levels aren't particularly original, but their settings go along with the story, while their bright colors and cartoonlike style fit right in with the rest of the game.

Even with all of its missed opportunities, there's fun to be had with Boogie. The character designs are nice, while the singing and dancing can be fun if you really get into it. But most people will likely see Boogie as a missed opportunity. It's far too easy, the tracklist isn't very good, karaoke is straight-up busted, and the dancing just isn't much fun. That's not what people are looking for when they spend $60 on a game, no matter how desperate they are for something new on the Wii. 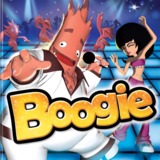 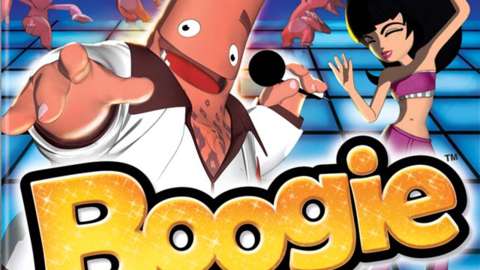 Boogie is a music/rhythm based game that features music made famous by the likes of The Jackson Five, Jamiroquai, Blondie and Simply Red.