This game brings Bomberman to the PSP with plenty of enjoyable, challenging single-player levels, as well as the fun and frantic multiplayer battles the series is known for.

There are certain games that push the limits of hardware and design convention in an attempt to create the next new sensation. Then, there are games like Bomberman, which has remained essentially unchanged for more than 20 years. Any complaints that Hudson's trademark franchise has become stagnant are invalidated by the simple fact that the basic Bomberman gameplay is still tons of fun after all these years. The most recent Bomberman game, for the PlayStation Portable, is proof positive that there's no need to mess with a proven formula.

There is a story to Bomberman, but you wouldn't know it by playing the game. Instead, Bomberman lets you play through 10 different-themed worlds, each with 10 stages. The levels vary noticeably in size and layout, but the setup is the same as it has always been in the Bomberman games.

You're dropped into a level that is filled with various "soft" blocks and "hard" blocks. The soft blocks can be destroyed by placing a bomb nearby, and by blowing up these blocks you'll collect useful power-ups. These power-ups are handy for clearing out more blocks and destroying all of the enemies in each level. There are power-ups that increase the range of your bomb blasts, the number of bombs you can drop at one time, and the speed of your character. There are also items that give you special abilities, such as the ability to walk through soft blocks or to kick placed bombs. With more than 15 items to collect, there are plenty of ways to increase and alter your firepower.

In a slight departure from Bomberman tradition, when you pick up items in the game, they don't immediately take effect. Instead, they go into your item stock, which is an inventory that you can access at any time to pick and choose the right power-ups for your current situation. During battle there's a navigation bar on the left side of the screen. You can use the L and R buttons to scroll through all the items you've collected and use the square button to activate items. It's a good system that lets you tailor your firepower to any given situation, but it can be cumbersome to scroll through a long list of a dozen or more items when you're trying to find a specific power-up in the midst of battle. However, the item stock system is used only in the single-player story mode, and when you're playing in battle mode, all the items you pick up take effect immediately.

The goal of each stage is to destroy all the enemies and find the hidden exit before time runs out. Most of the levels in the game give you three minutes in which to kill all the enemies and make your escape. However, there are items you can get to extend that time. If you fail to complete the stage within the time limit in the story mode, enemies will begin pouring out of the exit. In battle mode, blocks will begin falling from above, and if you don't kill your enemies quickly, you'll end up getting crushed. In the single-player game you have to face a variety of enemies, such as big, lumbering golems that take several bombs to kill, fast-moving yellow things that are difficult to trap, and bomb-laying, well, bombs. There are also bosses to contend with, such as a giant crab or a dragon.

Both the normal stages and the boss stages in story mode can be quite difficult at times, because in true Bomberman fashion it takes only a single bomb blast or contact with an enemy to kill you. There are items you can get that let you take more than one hit, but for the most part you never get a second chance to screw up. Fortunately you are given infinite continues, so you can keep playing the same level over and over again until you finally beat it. Experienced Bomberman veterans should be able to breeze through most of the earlier levels, but the game doesn't skimp on the challenge, and you'll find yourself dying frequently by the time you get to the third world.

In addition to the single-player game, Bomberman features a good multiplayer game. You can use the game-sharing feature to play with up to four players in an ad hoc battle with only one copy of the game. The controls do feel slightly more sluggish when playing an ad hoc game than they do in single-player, but despite that battle mode still delivers the same exciting multiplayer action that the Bomberman series is known for. There are plenty of options available so you can customize each battle to your liking. You can add computer-controlled bombers; adjust the time limit, number of rounds, and items; and choose from a decent selection of themed levels, each with its own unique quirks that require you to adjust your strategy. For example, there's a level where you move at eight times your normal speed, which makes for a crazy battle indeed. The battle mode is a great way to have some multiplayer fun, and the fact that you need only one copy of the game for a four-player game makes it that much more enjoyable.

Between the single- and multiplayer modes available you can spend a lot of time with this game. It could take several hours to play through all 10 worlds in the story mode. Once you do beat all 100 levels, you'll unlock a 3D version of the classic original Bomberman game, which gives you 50 more levels to play through. All in all this is a sweet package if you're a long-time fan of Bomberman, and it's a good place to start if you've never played any of the previous games in the series.

The graphics are bright and colorful on the PSP, and although the game is in 3D with a three-quarters perspective of the field, it's still easy to see what's going on. Each world has a theme that's carried throughout its 10 levels. It's standard stuff like a desert world, an ice world, and a forest world, but there's a lot of welcome visual variety that lends charm to the game. The sound effects and music are rudimentary, but they will appeal to your sense of nostalgia as you play along to the upbeat, cheerful music and cartoony sound effects.

Bomberman for the PSP is a good game for just about anyone. Sure, it doesn't take any chances with a proven formula, but for people who have fond memories of all the Bomberman games that have been released over the past few decades, this is a satisfying way to play some portable Bomberman. 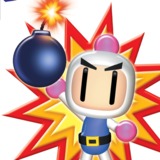 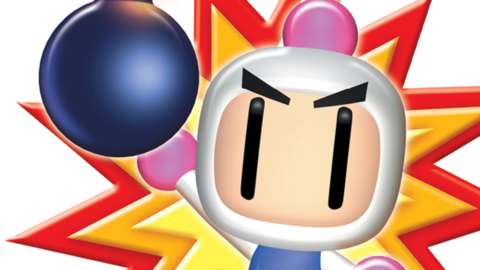 Bomberman returns with nostalgic gameplay and a new twist for the next generation of wireless, mobile gaming.