Bomberman Tournament is easily the best Bomberman to hit these shores since Saturn Bomberman in 1997.

There are three certainties in life: death, taxes, and Bomberman. Every major console and handheld since 1990 has been host to at least one, if not five, of Hudson's wildly addictive Bomberman games. The latest is Bomberman Tournament for the Game Boy Advance, released here in North America by Activision. Although longtime fans will bemoan the absence of costume choices and "Louie" partners in the game's multiplayer battle mode, the immensely satisfying premise of "bomb or be bombed" remains well intact.

Straying from a recent trend in Bomberman games, the Game Boy Advance release of Bomberman Tournament contains a fully realized multiplayer battle mode in addition to its single-player quest. With the aid of a couple of link cables, you and up to three friends can duke it out in any of the game's eight multiplayer battle arenas--each of which has its own unique gameplay twist. Whether you're avoiding buried explosives in the land mine stage, hashing it out with full power in the hi-power stadium, or just keeping it simple in the standard arena, the variety of locations offers something for everyone. The game supports both multi- and single-cartridge multiplayer options, although the load times for single-cartridge hosting are somewhat excessive.

The joy of Bomberman lies in its simplicity. Stuck in an arena with three opponents, you need to lay time bombs in order to trap and obliterate the competition. The last person remaining is the winner. As you vanquish foes and clear away obstacles, a variety of power-up tiles appear. Randomly selected from a pool of 10 different items, these tiles can do all sorts of mischief, such as lengthen blast range, increase bomb capacity, boost speed, or even reverse a player's controls. There is a notable lack of match configuration options, such as costume choice and power-up disabling, but these absences really don't impact the overall multiplayer experience. Fans of the series will welcome the return of the familiar Bomberman battle anthem, while newcomers will delight in the crisp, highly animated visuals that are made possible by the GBA's 32-bit horsepower.

For years, devotees to the Bomberman series have considered its single-player offerings to be little more than middling diversions from multiplayer competition. Bomberman Tournament's single-player mode may just change this impression, as its quest mode is actually a wonderful role-playing experience rife with all sorts of Zelda- and Pokemon-reminiscent enhancements. When the planet Phantarion comes under attack by the evil Brain Bomber, Doc and Max send Bomberman to investigate. Eight large cities and five puzzle-filled dungeons later, you'll have taken in a decent storyline, defeated six huge bosses, acquired a number of nifty gadgets, and even made a few friends along the way.

Fundamental to Bomberman Tournament's quest mode are cute Pokemon-like creatures called karabons. These critters not only lend advice and augment Bomberman's capabilities, but they also add a scavenger-hunt aspect to an otherwise-standard RPG. In all, there are 25 different Karabons to acquire, either through chance meetings or by gene-splicing two lesser breeds together. From time to time, CPU characters will challenge you to Karabon battles, which, much like Pokemon battles, are one-on-one turn-based fights. Unlike Pokemon battles, however, the outcome of a match is determined before it ever begins, as your Karabon's prevailing stats and three-set attack strategies make up the long and short of combat.

Perhaps the greatest surprise of all is that Bomberman Tournament's quest mode actually looks and sounds exceptional. The brunt of the action takes place in 2D from top-down vantage point, while Karabon battles and select minigames are presented in a side view. Each of the game's six different environments is vibrantly drawn, possesses only a minimum of rectangular features, and is detailed with all sorts of wacky nuances, such as trees that topple over or an earthen giant collapsed in the middle of a road. Better still, the animation and artistry of Bomberman and the game's other character sprites are easily on par with anything upcoming from either Nintendo or Enix. A sublime, somewhat orchestral soundtrack and rich sound effects lend further polish to an overwhelmingly solid presentation.

Although Hudson has left the door wide open for a sequel thanks to the omission of key multiplayer options, Bomberman Tournament is easily the best Bomberman to hit these shores since Saturn Bomberman in 1997. Socialites who have been aching for an excellent multiplayer battle game would be silly to pass this one up. By the same token, 20 hours of fine-tuned single-player gameplay and a jaw-dropping end sequence make this an excellent game for the antisocial among us as well. 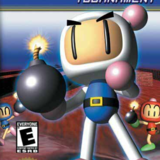