Bomberman, a titled birthed on the NES and later honed to perfection on the TurboGrafx-16, SNES, and Genesis consoles, is a title with a reputation that hasn't been doing too well of late. With a poor, isometric 3D release on the Nintendo 64 and an even more atrocious PlayStation racing title, it seemed as if Hudson was hell-bent on erasing Bomberman from the annals of gaming lore forever. What a surprise, then, to see the PlayStation release of Bomberman Party Edition, a top-down Bomberman title that returns to the series' old-school gameplay roots. Even more surprising, Vatical has just released it here.

Bomberman Party Edition is a top-down battle game for up to five players. In it, you and your friends take control of what are known as - you guessed it - Bombermen, whose sole purpose in life is to lay time bombs. Wander around a maze of blocks, set bombs, gather power-ups, and lure your friends into explosive situations - that is the essence of Bomberman Party Edition. The formula itself may not sound impressive, but it's this simplicity that makes Bomberman insidiously addictive. You walk around and try to trap your friends in corners, and they try to do the same to you, all while multiple explosions erupt in every direction. From time to time, a Louie egg may appear, giving you an added power to use while sitting atop a cute kangaroo. Mix in standard power-ups that accentuate bomb strength, increase bomb capacity, allow bombs to be kicked, and a whole host of variations on the theme, and you end up with a game that is exciting, simple, and competitive.

If you don't like the rules in the battle mode, you can use the Bomberman Party Edition's custom mode to tweak the settings to your liking. The game offers a few new twists, such as screen-filling hyperbombs and post-death chariot riding, which you may enable or disable at your leisure. Some people won't enjoy flying around the screen and pestering their friends after they've been fragged, so it's nice to see an option to disable this feature. You can also adjust round length, number of matches per win, quantity of power-ups, and hit points as well. From the amount of available options, it is obvious a lot of effort went into creating Bomberman Party Edition's multiplayer mode.

Unfortunately, all is not rose petals and ice cream in Bomberman land. Bomberman Party Edition's single-player mode, as is usually the case among Bomberman titles, is trash. Prior Bomberman titles take you on a journey through lush jungles and bizarre alien worlds, exercising your bomb-dropping skills to save the world. Bomberman Party Edition not only lacks this subplot, but it also lacks the lush worlds. As you progress through the game's 50 levels, you'll combat endless hordes of mindless enemies on levels that barely differ from the multiplayer battle arenas. While there are more enemies to clear, there is no complimentary increase in detail or design. Furthermore, you get an extra life for every level you beat, throwing difficulty right out the window. Zero fun and zero challenge. About the only bright spot in the single-player mode is that playing with the classic visuals enabled gives the game a sort of 1987-era NES-style nostalgia.

Visually, there isn't much you can do with a top-down arena battle title. Bomberman's visual design peaked with Super Bomberman 3 and hasn't changed since. Despite a few post-explosion particle effects and transparencies, Bomberman Party Edition doesn't seek to improve upon this formula either. While the formerly anime-style character models now have a pseudo-CGI feel imposed on them, the overall look and feel is on par with Saturn Bomberman - in other words, crisp and nondistracting. The game's sound quality meets a much worse fate, however. Sound effects and character voice snippets are hilarious and impacting, but Bomberman Party Edition's background music is simply atrocious. Remixing the old Bomberman themes is one thing, but giving them a Muzak twinge is cruel and unusual punishment. Still, Bomberman has never been about visuals or sound, so Bomberman Party Edition doesn't stumble too badly.

Despite its unusually deficient single-player mode, Bomberman Party Edition still manages to succeed where many previous attempts have failed, delivering an uproariously enjoyable multiplayer experience. With the popularity of party titles such as Mario Party and Crash Bash, Vatical is obviously aiming to offer this subset of gamers another alternative for their group-gaming dollar. Thanks to its less than modern visuals, Bomberman Party Edition may not make the same overwhelming first impression that competing efforts achieve, but if you give it a minute or two, you'll likely find the addiction known as Bomberman has you in its grasp. 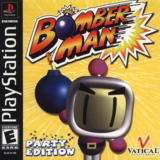