If you can deal with the lack of a traditional Bomberman multiplayer mode, the title makes a good candidate for your next portable game.

Bomberman has been around since time immemorial, or at least it seems that way. Hudson's prime franchise began as an action-puzzle game, expanded onto new platforms, experimented with new genres (platform, racing, even strategy), and has once again returned to its original style in Bomberman MAX Challenger for the Game Boy Color. A new collect-and-trade aspect joins timeless game mechanics, providing a portable experience that's fun and challenging.

When a giant computer called Brain goes berserk and starts wreaking havoc on the universe, it's pretty obvious somebody is going to have to do something about it - and it's a good bet that blowing it to smithereens would do the trick. The single-player mode in Bomberman MAX sends you through five themed planets, each of which contains 15 interconnected stages of overhead-puzzle action. The stages present a nice variety of challenges to meet in order to clear them. You may be asked to defeat enemies with a limited number of bombs, defeat all of a specific type of enemy, find the exit before time runs out, and more. Even if you're not a veteran of old-school Bomberman titles, the gameplay is very easy to pick up. In each maze-like stage you'll have to satisfy your preset victory condition using your bombs and your wits. Besides proper placement and timing of bombs, power-ups are a big part of gameplay. Grabbing these power-ups will allow you to place more and bigger bombs, affect your speed, or let you do things like throw and kick your bombs at enemies. Some of the stages can be extremely challenging, but you don't need to complete every level to find your way to the end of the game. Also, thanks to a battery backup and unlimited continues, you shouldn't get too frustrated with the tougher parts.

Following the two-version trend in handheld games, Bomberman MAX comes in blue and red. The blue champion cartridge puts Bomberman himself in the spotlight, while the red challenger version stars Max, who wears a cape and wields electrically charged bombs. Aside from cosmetic differences in the main characters, each version also features some exclusive stages and collectible critters called Charabombs, both of which can be traded or used in battle against someone with another cartridge.

The battle mode lets you pit collectible critters called Charabombs against your friends. Much like in Pokemon, battles are decided by stats (which you can increase by picking up food in the single-player mode), elemental quality (fire, electric, water), and some strategy. Unlike in Pokemon, though, the battles are predetermined - you pick all your moves up front and link up via the infrared port to decide the outcome. Charabombs can also be combined to form more-powerful types. It's a nice bonus, but it doesn't quite make up for the absence of a true versus mode where Max and Bomberman can settle their differences by blowing each other up through the link cable.

Both the graphics and sound in Bomberman Max are more than adequate. Each of the themed planets has its own graphical look, and the soundtrack gets the job done nicely even though it lacks a bit of variety. The single-player game will provide a lot of value, as you probably won't complete all the stages in one car or plane trip. If you can deal with the lack of a traditional Bomberman multiplayer mode, the title makes a good candidate for your next portable game. 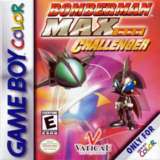