Bomberman Hero once again places our bombastic buddy in the role of platform protagonist.

Let's face it. Hudson Soft's been on a tear recently with its Bomberman franchise. First it was Saturn Bomberman, then it was the rendered/isometric Bomberman World on the PlayStation, followed by Bomberman 64, Bomberman Fight for the Saturn, and Bomberman Wars for the Saturn and PlayStation. Now, Hudson's back again with yet another game featuring its explosive mascot, this one for the N64.

Making its appearance surprisingly soon after the release of Bomberman 64, Bomberman Hero once again places our bombastic buddy in the role of platform protagonist. Your duty is to rescue the Princess So and So (sound familiar?) from the clutches of the evil blah blah blah and to restore peace to such and such (actually Queen Millie Ann, Nitoros, and BomberWorld, in that order). Bomberman Hero spans five distinct worlds, separated into sections, each designed to test your platforming abilities.

Despite the uninspired plotline, Bomberman Hero is a rather surprising success. In a departure from Bomberman 64, Bomberman Hero boasts a number of new gameplay features that make this a completely new Bomberman game. In a move that will shock and perhaps even alienate hard-core Bomberman fans, Bomberman Hero has absolutely no multiplayer feature, and after Bomberman 64's lackluster attempt, that might not be such a bad thing. For those not so concerned with Bomberman's legacy, they get a solid, if unoriginal platformer to wrestle with. If anything, it almost comes off as a cross between Sonic 3D Blast and Crash Bandicoot 2. As it turns out, Bomberman Hero is one part platformer and one part adventure game, and with it comes a host of new moves to help Bomberman save the Queen. For instance, Bomberman can now jump. In addition to jumping, he can also grab and hang from ledges, which comes in handy after a badly timed jump or an unfortunate fall off a cliff. Bomberman has also inherited a life bar. No more one-hit deaths. During the course of the game, a number of levels will appear requiring Bomberman to utilize special attachments suited to the stage at hand. These devices include the BomberCopter, BomberJet, BomberMarine, and BomberSlider as well as an appearance by Lui the Kangaroo. Each has its own feel and style of control.

Nevertheless, it wouldn't be Bomberman if he wasn't throwing bombs, and throw he does. All kinds of bombs in fact. In addition to merely throwing bombs, you can increase the amount of bombs thrown (up to four) as well as the diameter of the explosion. For the intrepid explorer, various power-ups lie in wait, such as the remote bomb, freeze bomb, salt bomb (for slugs), and power glove. Depending on the enemy and its elevation, Bomberman will be required to either throw or kick the bombs at his foe. In a situation where more than one enemy approaches, by holding down the attack button, Bomberman will slowly begin to wind up his arm until it resembles a windmill at full speed and then release up to four bombs in one throw. It's this variety of new (for Bomberman) features that refreshes and invigorates what would have been overly stale gameplay. How many people wish that Mega Man could simply duck?

Visually, Bomberman Hero is everything you could expect it to be. All platformers should look this good. Bomberman himself is fully rendered in polygons and animated beautifully, as are the numerous enemies and boss characters. The backgrounds have been thoughtfully designed and are solidly constructed, glitch-free, and graphically lush. Even explosions look great as shock waves litter the screen with each bomb thrown. Hudson Soft has managed to create a crisp and vibrant world, saturated with detail and gorgeous effects, all while avoiding the overly blurry look associated with most N64 games. Cutscenes, which reveal the storyline, have a hi-res look to them that complements the game nicely. The expressions on Bomberman's face are worth the price of admission alone.

Musically, Bomberman Hero's soundtrack is reminiscent of the one found on Saturn Bomberman, a mix comprising assorted techno and drum n' bass tracks. Sound effects, while not setting any new sonic benchmarks, are also well represented.

Unfortunately, even with a game that does as many things right as Bomberman Hero does, there are still bound to be problems. Camera control, unlike Bomberman 64, cannot be rotated 360 degrees. Instead, Bomberman Hero uses a fixed camera position, which can be tilted slightly. Too slight, regrettably, to be of any use. The camera angle also presents some mild problems in aligning platform jumps. This can be especially tricky when jumping onto a moving platform when coupled with the sensitive analog control. The game also experiences slowdown, which can lead to awkward timing during those same tricky jumps. However, most of these are technical issues that tend to disappear once you learn to compensate. The thing that won't disappear so easily is the distinct lack of challenge. Enemies are usually nothing more than obstacles waiting to be blown up. The only time the game gets even remotely difficult is when facing the bosses, and even that's not so difficult. More formality than formidable. Another sensation that's hard to escape, despite the graphical triumphs and the ease of the gameplay, is a certain feeling of pointlessness. The weak premise merely seems like a crappy excuse to put some levels together and have the gamer go through the motions. Run through levels, trigger switches, find exit, rescue Queen. Whatever. Once completed, you'd be hard-pressed to pick up the game for another go.

In the end, what Hudson Soft has come up with this time is truly a mixed blessing. If you can get past the fact that Bomberman Hero is an above average platform game and nothing else, you'll probably have a pretty good time. It's good looking, easy to play, and perversely satisfying. Who doesn't get a kick out of blowing up everything in sight? Add to that the fact that Bomberman just looks so cool in 3D, and you might have a winner. However, if you're the kind of gamer who wants a little meat with his potatoes, you might want to pass. Super Mario this is not. Maybe Hudson Soft should slow down a little. With Bomberman Hero, it was on to a good thing, but you just can't shake the feeling that given a little more time, Hudson Soft could have taken something good and turned it into something great. Maybe next time. 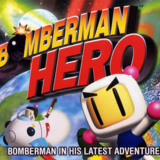