Since Bomberman has long been known to play with fire and explosives, it was really just a matter of time before he added the track to his long list of vices.

The undeniable urge to race has struck many a platform- and puzzle-game hero. It hit Mega Man in the Japanese release Rockman: Battle & Chase and Square's cutesy-cutesy Chocobo in Chocobo Racing. It's even happened to Mario twice now. Since Bomberman has long been known to play with fire and explosives, it was really just a matter of time before he added the track to his long list of vices.

So, this is where it's all gotten him. The bomb-chucking star of Hudson's genre-defying series and several of his friends have saddled up on Tiras (the worried-looking hippo-dinosaur hybrids) and Louies (the excitable kangaroo creatures introduced several games back), and they are competing in races for money and fame. In the single-player mode, you race against four opponents, drop or throw bombs at them, and use power-ups found along the way. (Just about everything is here, from power bombs to triple bombs; plus, there are a few new items as well). Using a feature available in a number of Japan-only horseracing video games, you can make your mount sprint ahead for short distances until it tires. If you come in first, second, or third, you'll get cash. Make enough, and you can buy extra power-ups, better Tiras and Louies, and gain entrance into the next race. In the two-player split-screen mode, you can make a bet and race against a friend.

The graphics are a bit plain for this generation of PlayStation games, and pop-up and build are an issue, of course, but it's not a horrible-looking game. The music in BFR alternates between sounding like a speeded-up tape and an imported electronic toy - ultimately, these sounds earn the game points for quirkiness. Altogether, the game's not very long, very good, or very bad - which at least wins it the dubious distinction of being the best Bomberman game on the PlayStation to date. If you're a fan of Bomberman or Mario Kart, it's worth renting, but it's a little too short, and the tracks are a little too simple to warrant a more long-term relationship. 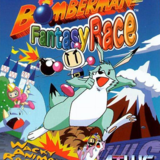