Bomberman is easily the most prolific character in video game history.

Bomberman is easily the most prolific character in video game history, having appeared in titles for every major system since the original NES - and with multiple versions on quite a few. And yet with so many installations, every game until now (with the dubious exception of Panic Bomber on the Virtual Boy) has maintained the same premise: The player plays as a little robot who tries to be the bomb he throws. The robot character drops bombs to clear his way through the playing field's blockades and obstacles, attempting to blow up his enemies all the while. But if he doesn't run like hell to get away from the blast, he'll go up in smoke as well. Besides obviously clearing pathways, the advantage to blowing up obstacles is that power-up items appear from within the wreckage that either help or hinder him. These power-ups include the kick boot (to propel the bomb forward), the glove (to chuck the bombs airborne), fire (to expand their blast radius), extra bombs (the more the merrier), or the dreaded skull icon, which grants the formidable Bomberhea (which is kind of like red kryptonite to Superman, giving a different disruptive effect with each exposure).

Since the introduction of the multiplayer battle mode (wherein you and all the way up to nine of your friends can face off against each other), the game hasn't changed much over the years. Not many fans have minded though, since multiplayer challenges have been so incredibly addictive that the arrival of a new version of the game probably let them finally put their old system (and game) into the closet. Now the latest Bomberman game has arrived for the Nintendo 64, and it's found many old fans fearing change.

Visually, the game is a Super Mario 64 3D face-lift of the series, though the theme of the one-player scenario is much the same. Bomberman attempts four different elemental worlds (each with its own sub-boss), before going after the main baddie who threatens the overall Planet Bomber - though now the game fields are wide-open SM64-like spaces instead of the once closely confined quarters. Besides the perspective and control change, the bomb dynamic has been altered as well. Instead of starting with a single "drop bomb" move, you have the loaded Bomberman model, as he can now immediately kick, throw, or power up bombs into huge bombs, without the need for obtained power-ups. But since hardly anyone really played single-player Bomberman games before anyway, these changes aren't likely to raise anyone's hackles. Especially since the single-player mode is pretty improved over past games now that it's made the leap to 3D.

But the multiplayer mode has gone through a few changes as well, and therein lies the rub. In previous titles, you and your opponents would begin each round cornered into different areas of the play field. You'd then drop bombs to clear your way through to your enemies, hopefully coming across a few power-ups on the trail. In Bomberman 64, the arenas are wide open, and you can begin attacking opponents from the get-go. There are far fewer power-ups to be had, though they're pretty unnecessary since most of them are built-in (the kick boot used to be a coveted item, now everyone's wearing them). Now, the game dynamic seems to be that instead of cornering your opponents with a bomb (now impossible due to the large, open playing field), you must stun them momentarily by directly hitting them with a bomb, hoping it will explode nearby while they're still passed out. Another change is that once you "die," you turn into a ghost (kind of like being a mobile bomb in the multiplayer arena mode of Super Mario Kart 64). You can then hop onto the surviving opponents, slowing them down for a few moments and possibly getting them killed by a blast in the process. An explosive multiplayer take on capture-the-flag has also been included, which is worth mentioning, but only in passing.

Of course, change in and of itself isn't bad. The most important meter is the fun, so the question remains, is the game still fun? Well, the single-player mode is passably entertaining, but it's still a stretch away from being "must-play TV." And while it may look a bit like Super Mario 64 (with all the perspective problems that entails), it's clearly no Mario. The multiplayer mode is... sort of fun, though it's certainly lost all the addictive charm that so positively defined the series. And sadly, because of that, the game just doesn't seem like Bomberman anymore. 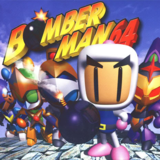