Though shallow and flawed, Body and Brain Connection has some neat minigames that engender a satisfying sense of progress.

While all video games engage our brains, some make cerebral stimulation their raison d'etre. Body and Brain Connection attempts to sharpen your wits with an assortment of minigames that test your mental faculties with light physical challenges. Using the Kinect's motion-tracking capabilities, you solve fill-in-the-blank math problems by kicking numbered soccer balls or represent a digital time on an analog clock by positioning your arms appropriately. Body and Brain Connection is a successor to the Brain Age series in all but name, down to the daily tests of your brain's age and the familiar host, Dr. Kawashima. It captures the self-improving appeal of the genre nicely, though it is also burdened by a few shortcomings. Some minigames are hampered by tracking issues, resulting in inadvertent answers, and swapping profiles midsession can also be problematic. It is ultimately a fairly shallow game, but Body and Brain Connection's exercises offer a fun way for puzzle fans to get a few kicks out of their Kinects.

When you fire up Body and Brain Connection, the friendly doctor administers an initial test of your brain age to establish a point of reference for your further training. After playing three minigames, you are rated on a scale of 20 to 80. The faster and more accurate you are, the younger your brain age. Though you can take the test as many times as you want, only your first score of the day will be recorded on your calendar. As you become more familiar with the exercises, your brain age will almost certainly improve, and seeing your brain age get better over days and weeks of tests creates a feeling of satisfaction.

In addition to taking your daily test, you can choose to play any of the 20 minigames whenever you like. One menu option serves up three minigames that Body and Brain Connection recommends based on your test progress. Another lets you scroll through all 20 minigames and select the beginner, intermediate, or advanced difficulty level, depending on your previous performance in that activity. The minigames are sorted into five categories: math, logic, reflex, memory, and physical. While these categories do have general themes, don't expect the logic challenges to be math-free, and because you're using your limbs to select answers, every exercise has a physical component. You aren't likely to get a workout with any of these games, but many of them have a timer and reward quick answers. Selecting an answer is usually a matter of darting your arms or legs in a specific direction or positioning them carefully to select onscreen icons. None of the movements are difficult or strenuous, but they are certainly more involved than pressing a button.

Given the simplicity of the motions involved in the minigames, Body and Brain Connection feels more mentally challenging than physically taxing. Leaning your torso left, right, or standing straight up in a math minigame isn't very tough; the challenge is to track a scrolling line of digits and determine whether the sum of the bracketed numbers is less than, greater than, or equal to 10. Popping virtual balloons is easy and kind of fun, but things get tricky when they are numbered and you must pop them in ascending order, or when you have to pop the right color from a visually misleading cue (for example, the word "blue" in red text on a yellow background). Players who enjoy math-based challenges may like the minigame in which a timer counts up from one and you must punch the numbered bags when the timer reaches a multiple of those numbers (like punching 4 and 3 when the timer reaches 12). Those who prefer visual challenges may gravitate toward finding the two identical shapes amid an array of icons, and those who aspire to ambidexterity should find evading ghosts by guiding Pac-Man and Pooka (from Dig Dug) with their right and left hands simultaneously an enjoyable test.

In some of these exercises, it seems that success is a two-step process. First, you must figure out the answer; then, you must select it. Initially, you are likely to notice a gap between these two components, as if you are conscious of your brain sending the commands to your limbs and then your limbs receiving them and responding. The more you practice, the narrower this gap gets and the closer you get to feeling like you are delivering one fluid solution. This sensation is one of the most satisfying parts of Body and Brain Connection, and seeing the results reflected in your brain age is another.

Unfortunately, there are a few motion-related speed bumps that regularly hamper some minigames. Body and Brain Connection sometimes has trouble keeping up when you move your arms across your body (for example, when making a "greater than" sign). By marshaling your movements correctly, you can usually mitigate this issue, but it's frustrating when your initial reflex doesn't register and you have to reposition. One exercise in particular involves selecting numbers that add up to 10, but it the recognition criteria is a bit overeager, so you may find yourself registering incorrect answers with your elbows while you attempt to reach the correct position. These isolated problems don't spoil the experience, but the lack of precision in these particular minigames clashes with the spirit of a game that is meant to test your reflexes and accuracy.

In addition to testing yourself, you can have some friends join in and see how they stack up. Two to four players can play a series of group exercises, sometimes alternating and sometimes competing simultaneously. At the end of the session, the players are ranked on their performance and an MVP is named. Alternatively, you can take a group mock test, which assigns each player a brain age after just one round of competition. These modes can be fun with the right group of folks, but Body and Brain Connection doesn't always handle switching between profiles well. If you take your brain fitness test and then someone else wants to jump in, the game may recognize him or her or it may "fail to register" that player, even if he or she has played before. It's a needless hassle, though it can usually be solved by exiting to the dashboard and restarting the game.

The problems with Body and Brain Connection aren't major, but they are a thorn in the side of what should be an easily accessible and fully responsive game. The assorted minigames cover a decent variety of activities, and there are some that evolve in interesting ways as you move up to the intermediate and advanced difficulty levels. Yet given the limited scope and merely decent number of minigames, Body and Brain Connection feels overpriced at $49.99. Still, there is some satisfaction to be had here, and this is the first game in the brain-training genre to make it to the Kinect. Though the controls aren't perfect, Body and Brain Connection uses the hardware in some novel ways, and there's no denying the pride that comes from sharpening your response times and feeling your brain get "younger" by the day. 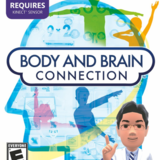 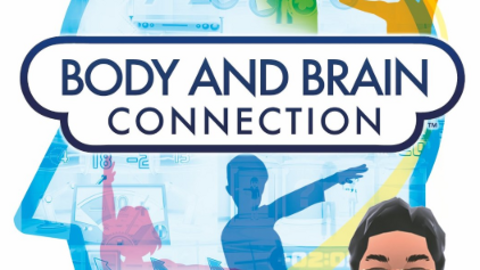 Body and Brain Connection features 20 minigames that your math skills, reflexes, and more using the Kinect.