Blues and Bullets: Episode One Review

Santa Esperanza or Sin City? I found it hard to tell the difference between the two black-and-white burgs in the first episode of Blues and Bullets, a five-part adventure series from indie developer A Crowd of Monsters that sets a striking neo-noir tone. There are just as many shadow-streaked rooms, rain-swept streets, and bloody red accents as in anything scripted by Frank Miller, while the plot is stuffed with enough psychos, horrific violence, and cornball dialogue to make Dashiell Hammett roll over in his grave. This is an inspired rip-off for the most part, however, hitting the same notes as a good hard-boiled detective novel despite a few offbeat scripting choices and some technical glitches.

As noted above, the location is a crime-ridden fictional city called Santa Esperanza. The year is 1955. The protagonist is Eliot Ness, but not the historical figure or even the fake one from TV and movies. This take on the leader of the famed Untouchables who brought down Chicago gangland boss Al Capone is different from anything seen before. Instead of taking out old Scarface with a tax case, Ness wound the case down with a Schwarzeneggerian shootout, slaughtering a dozen or more mobsters single-handedly while so drunk he could barely stand up. Twenty or so years later, Ness is a haunted ex-cop running a diner and trying to run away from his past, which includes murdered friends, an unhealthy attachment to a dead buddy’s wife, and a whole lot of booze and guilt. All this is complicated by the fact that Capone has just been paroled and is asking his old nemesis to help find his daughter, who has been kidnapped by a sinister cult that is abducting, mutilating, and sometimes slaughtering little kids.

All in all, it’s an innovative look at an American icon crossed with a more modern serial killing saga. But it’s also kind of off-putting because everyone knows the story of Ness and Capone courtesy of decades of TV shows and movies. I eventually came to appreciate this bizarre new angle on characters I thought I knew, although I never completely abandoned the notion that all this messing with history was sort of unnecessary. This version of Ness only shares a name with the real person, and the same goes for Capone. Swapping out Chicago for Santa Esperanza is also an odd choice given the use of real names for the lead characters. Why not go one way or the other? Doing both makes the whole story feel somewhat off-kilter, for no real purpose.

Added alt-history weirdness creates a surreal mish-mash. Strange concepts are tossed in for kicks, like the apparent survival of the Hindenburg and its subsequent renovation into a luxury hotel in the clouds. You visit it early on in the episode as a real place, but it is so impossibly huge and luxurious that it’s more Xanadu than retrofitted zeppelin. Even though you’re supposed to be on board the big balloon, you also see that famous photo of the airship exploding into flames over Lakehurst, New Jersey framed in its hallways. I was never sure what to think here. All things considered, the plot is innovative and guaranteed to keep you guessing about what’s coming next.

Blues and Bullets’ gameplay is standard for an adventure game, although both the action and sleuthing is more involved than that in other similar series in the episodic genre. This is more of a traditional adventure game than what Telltale produces, for example. The structure isn’t quite as linear. Many choices influence the flow of the story, and dialogue options run a gamut of emotions that subtly alter how interactions play out with other characters. There is also more of a necessity to explore environments. Investigations are hands-on. Ness tackles a gruesome murder by examining the entire scene, from the occult altar made of severed hands in the bathroom to the impaled corpse in the living room and the discarded spoon in the hallway, which may have been used to scoop out the victim’s eyeballs. Ness puts clues together on a deduction board that leads him to conclusions. Nothing here is particularly challenging, although the process replicates the step-by-step nature of a criminal investigation.

Action scenes are also more involved. Button-press fights and reactions are similar to those in more casual adventure series, but they tend to demand a little more from the player. Again, there isn’t anything here too tough, although you do have to hit buttons a little more quickly and more often than in similar games. In addition to the bare-knuckle sequences, there are also firefights in which you take cover and blast away at enemies. Anyone with even the most rudimentary arcade skills will be able to take on these vaguely GTA-inspired battles without breaking a sweat, but at least the game goes through the motions and gives you more to do. I’m hoping that future episodes ramp up the challenge and take advantage of the gangster setting with some serious gunplay.

What makes Blues and Bullets really stand out is its atmosphere. The game looks like an interactive version of the Sin City movies. The entire game is cloaked in long shadows and a gloomy air of menace, which is built up to such an extreme that even Ness’s diner in the middle of a sunny afternoon comes off as a midnight spook house. Surreal touches add to this effect. A dream sequence illustrating Ness’s tortured thoughts plays out as a gunfight in and around giant headline letters recounting just how corrupt and awful his world has become. Other stylish touches add tension. While most of the game consists of high-contrast black-and-white, red accent slashes are everywhere. This is of course used to indicate blood and to create a constant threat of violence. Even Ness’s ever-present red tie is a warning sign that bad things are about to go down.

The dialogue is also very good, albeit in the cheesy vein of old-time noir. Ness is pretty much the prototypical self-flagellating private detective with a weakness for booze and dames. Many lines teeter on the edge of self-parody. At times it’s not entirely clear whether the game is actually laughing at itself. While most of the story takes everything as seriously as an IRS audit, some aspects are over the top. One moment in which Ness interrupts a knife-thrower to the disappointment of the crowd and his now-perforated female target is so played up for slapstick that the Untouchable briefly turns into Frank Drebin. The voice acting is all over the place, but the leads are good for the most part. Ness is played as kind of a growly, boozy take on Batman, and Capone is a no-surprises, marble-mouthed thug. The cast is small, though, and actors try to hide their multiple roles with broad accents that do nothing but make the game seem amateurish.

Another issue that illustrates the indie nature of Blues and Bullets is the presence of a few bugs. Slowdown is the most noticeable problem. Every so often, the game will drop to single-digit framerates. This usually takes place during panoramic introductions that sweep across city blocks. On a couple of occasions, this brought the game to a complete halt for me and forced a restart. Another annoyance was a cursor that never stayed still. On selection menus in the options and within the game itself as I organized the investigation board, the selected option constantly clicked to the right regardless of whether I was using the mouse and keyboard or the gamepad controls, forcing me to push back against the grain to make a choice. This was merely an irritant, although it could have been show-stopping if the game had demanded more interaction in this fashion.

Although Blues and Bullets isn’t without its flaws, this first episode sets a distinctive comic-book, crime-noir attitude compelling enough to keep you playing and looking forward to what the series will offer in future installments. Anyone who enjoys classic noir fiction or the decidedly modern, bloody take on it offered up on the grim streets of Sin City will find a lot to like here. 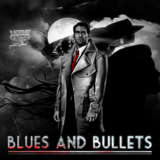 Brett likes his film noir, but prefers it in novel form. Jim Thompson would have liked Blues and Bullets. 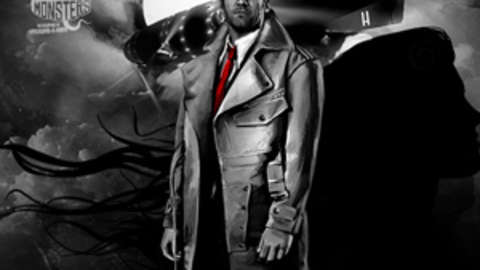 Blues and Bullets is an episodic noir story.