This little platformer isn't engaging, charming, or clever enough to even be worth its low asking price.

On the surface, Blueberry Garden sounds like a sure hit for fans of small-budget independent games. It won the grand prize at the 2009 Independent Games Festival, and it retails on the Steam digital download service for a mere $4.99. What's there to lose? Well, you could lose $4.99 that could go toward purchasing a better game, for starters. This teensy 2D puzzle platformer has mild, minimalist appeal, but it isn't clever or engaging on any level, and it's buggy to boot. There isn't much behind Blueberry Garden's curtain, and there isn't enough charm to veil that simplicity.

Blueberry Garden's main conceit is that it doesn't tell you what you're supposed to be doing, though you should be clued in by a quick camera shot at the beginning of the game. Because the element of discovery is the game's primary appeal, detailing the player's goal amounts to spoiling the experience. Nevertheless, it won't take you long to figure out because there's really nothing clever or unique about it. You begin by meandering about a minimalist world of fruit-bearing trees and ambling fauna as a big-beaked humanoid. You can walk, jump (though not very high), fly, pick items up, and eat fruit. That is the extent of your abilities--or almost the extent, in any case.

You see, eating that fruit benefits you. Each snack has an effect, if not on you, then on the world around you. Again, detailing those benefits is tantamount to a spoiler, but it's safe to say that consuming foodstuffs is the key to solving the game. Figuring out the advantages on your own is somewhat fulfilling, but the mechanics aren't that unusual or creative. It takes a smidgen of brain power to figure things out the first time, which means your initial, more laid-back play-through may result in reaching Blueberry Garden's less triumphant conclusion. The second time, you're likely to have a greater sense of urgency for a while (explaining why would reveal the "secret"), but you're also more likely to discover that Blueberry Garden--once its enigmas are exposed--is nothing special. The main puzzle isn't interesting or crafty enough to be shrouded in such ambiguity, and the exploration isn't interesting enough to make it engaging. There's apparently a bit of an ecosystem at work, so birds, moose, and a few other creatures wander about the single level, but they don't impact the gameplay, nor do they make the world feel alive. Once you've spent the hour it takes to complete Blueberry Garden, you'll be done for good.

While Blueberry Garden isn't exactly charming, its simple hand-drawn look is inviting. The terrain's black outlines and the off-white background make the gentle colors stand out, and the foliage and animals are attractive enough. So it looks nice, but not so nice that it should have the following performance issues. On two separate machines that far exceed minimum requirements (which seem rather high for a 2D game as it is), Blueberry Garden was prone to slowdown during one of the special effects initiated when eating a piece of fruit. On one of these occasions, the game simply stopped responding, and on others, we flew outside of the bounds of the level and weren't able to fly back (luckily, you can hold down the home key to return to the level's central locale). There are a couple of short but absolutely lovely piano tracks that add a gentle tone to the journey, and though they only play at scripted moments, they are easily the highlight of the presentation.

Blueberry Garden is a harmless effort from a single person, Erik Svedang, which may tempt you to give it the benefit of the doubt. But even compared to small independent games, it comes up short in almost every respect. It lacks the hypnotic vibes of Everyday Shooter and Flow; the excitement of The Dishwasher and Comet Crash; and the charms and innovations of And Yet it Moves, Braid, and Flower. In other words, it's a mediocre representative of indie gaming--and a mediocre game. 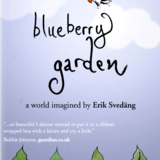