Bloody Wolf is an exciting run-and-gun shoot-'em-up that's held back by the absence of a two-player option.

Bloody Wolf is a "run and gun" shoot-'em-up that was originally released for the TurboGrafx-16 and shares a great deal in common with games like Commando, MERCS, and Ikari Warriors. You play the part of a lone mercenary sent to rescue the president and a bunch of POWs from a fortified island occupied by a terrorist army. Each of the game's eight stages consists of multiple areas that scroll horizontally or vertically as you move through them. Using a machine gun, a knife, and some grenades, the general idea is to slaughter the multitudes of enemy soldiers that appear, without running into too many of their bullets and bombs. The screen is usually hectic with all the bullets and explosions, and the heavily armed bosses waiting at the end of each stage further increase the intensity level.

If you've played games like this before, Bloody Wolf will seem like familiar territory at first. The isometric viewpoint, eight-way movement, and "run and gun" gameplay borrow from the same playbook that games like Commando and Ikari Warriors established, and the various medical kits and limited-use weapons function as you'd expect them to. The speedy motorcycles that you can ride also work just like the tanks in Ikari Warriors. However, Bloody Wolf isn't simply a carbon copy of its progenitors. It brings a few sweet ideas of its own to the run-and-gun formula. Besides shooting everything that moves, you'll occasionally have to jump over gaps, duck underwater, scale fences, and climb trees to reach enemies or proceed through the stage. You'll also frequently come across buildings, caves, and trucks that you can enter and explore. These smaller areas usually contain a few enemy soldiers, hostages, and weapon crates. Hostages also sometimes give you items such as keys and flippers, which can ease the process of opening crates and swimming, respectively.

You can only take a few hits before you die, and you'll definitely watch yourself die frequently as you learn the layout of each stage and figure out how to exploit the bosses' weaknesses. Thankfully, that brutal difficulty is offset somewhat by the ability to continue as often as you like. Dodging bullets and gunning down evildoers is extremely satisfying, so you probably won't mind the learning curve. The tiny enemy solders move fluidly and die with a flourish, while your own character has a variety of macho animations for actions like running, shooting, and chucking grenades. You won't be impressed by many of the human bosses you face, but some of the larger tanks and helicopters look downright menacing with their multiple gun turrets. Along the way, the militaristic music and different jungle backdrops provide the appropriate mood and scenery. The amount of detail and depth is about what you'd expect from a 16-bit game made in 1990. There are some nice little touches, though, such as explosions leaving marks on the ground and windows that break when you shoot them.

The game's main problems are the large hit zone that surrounds your character and the lack of a two-player option. You'll get used to the large hit zone pretty quickly; all it really means is that you need to move an extra step or two to avoid bullets and explosions. There's usually plenty of wiggle room anyway. Of more significance is the absence of a two-player option. Hacking through an entire army solo like the video game equivalent of John Rambo is fun, but the thrill starts to wear off after a couple of plays.

All told, Bloody Wolf is worth the 600 Wii points ($6) it'll cost you to play. You won't be able to shake the feeling that the game would be more fun if you could play alongside someone else, but the lengthy levels and explosive gunplay should still keep you gleefully occupied long enough for you to feel that you got your money's worth. 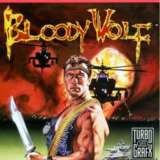 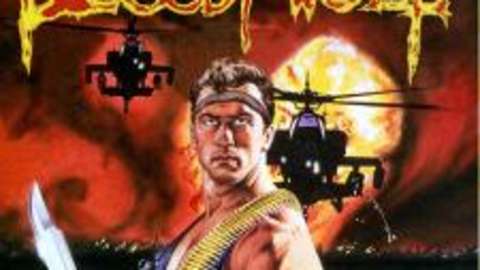