BloodRayne is a good third-person action game that's pretty straightforward but has a few nice twists.

BloodRayne, a third-person action game featuring a red-haired, scantily clad female vampire as the main character, may seem like just another generic action game with a provocative box. But there's a great deal more to the game than you might think. Even if you do give it a chance, it's possible to miss all that's good about BloodRayne since the first hour or so of gameplay is actually pretty bland--most of the really interesting stuff doesn't show up until later in the game. The slow start can make BloodRayne a tough game to stick with, but those who do will most likely find BloodRayne to be a surprisingly fun action game for the GameCube.

You play through the game as Agent Rayne, a half-human, half-vampire who, just like Blade, has all of a vampire's traditional strengths yet hardly any of its weaknesses. She's recruited to work for a secret society that wants her help in a crusade to rid the world of corruption caused by black magic. Story doesn't actually figure prominently in the game; instead, you'll just end up fighting your way through various enemy-infested levels.

Despite the supernatural elements, the game takes place in the real world. The opening levels of the game put you in the swamps of Louisiana during the 1930s, a time when black magic apparently got out of hand and caused a bunch of zombies and giant spider-looking creatures to spring up. In these levels, you mainly move from area to area, beating up mindless zombies and clearing out the giant spider creatures' nests--it's about as much fun as it sounds. And, of course, you're in the swamps, so there's a great deal of water--something that vampires and even Agent Rayne don't deal with very well. So anytime you see water, you have to try to avoid it by taking to high ground or by finding another route.

After about an hour of running around the swamps, you finally come to an end boss for this area, and then the game completely changes. The story picks up five years later, where you're now fighting Nazis. The basic concept remains the same--beat up all the random bad guys on your way to taking out the main Nazi officers, and repeat. But beating up Nazis sure beats beating up giant spiders.

The gameplay in BloodRayne has several elements that are a bit more complex than what you would find in a typical action game. For starters, Agent Rayne can see enemies through nearby walls, which can also reveal where she needs to go. This vision ability, along with an onscreen radar, makes it incredibly easy to find your way through the game's rather large environments, which is nice, since it keeps you from having to wander around too much.

After you get past the swamp levels, Agent Rayne also learns a new ability that allows her to move faster than anyone else--basically the same idea as the slow-motion "bullet time" mechanic from Max Payne. The one major difference between Rayne's ability and Max Payne's is that here, you aren't restricted to using the slow motion for a limited time. In fact, once Agent Rayne learns the technique, you could conceivably play the entire game in slow motion and take out enemies and dodge bullets to your heart's content. Later on in the game, Agent Rayne learns an ability that lets you zoom in from a great distance and snipe enemies from afar. The basic attacks that you start the game off with include standard kicks and slashes, although these abilities also become stronger as you progress through the game. Using basic attacks repeatedly causes a super-move meter to fill up, which, when full, allows you to execute extremely powerful strikes for a limited time. All told, these moves make Rayne extremely powerful.

What's more, Agent Rayne can pick up any of the guns her enemies drop, and the mechanics for firing the weapons are as simple as pressing a button, since the weapons auto-target. You can use these weapons and control Agent Rayne in several ways because the game includes several control configurations. The best configuration lets you control the game as though it were a first-person shooter, with the analog stick used for movement and the C stick used for aiming.

Despite all of Rayne's powerful attacks, the one gameplay mechanic that seems particularly overpowering is that she can feed on just about any enemy she encounters--Rayne sucks their blood and they die. This action not only kills the enemies with relative ease, but it also refills her life bar. This feeding mechanic, along with the bullet-time mechanic, plus the fact that you can still aim and fire Agent Rayne's guns while feeding on an enemy, makes Agent Rayne practically unstoppable. The game tries to compensate for this by throwing a ton of enemies at you and makes them harder to take out as you progress through the game, but still, once you get a grasp on all the moves available, you'll be able to slaughter your opponents with relative ease.

The game's visuals are good in both design and execution. The character of Rayne herself is particularly well done. Agent Rayne's hair moves realistically as she runs and jumps about, and her animation is very precise and lifelike, albeit with a distinctly supernatural speed. The clothing the characters wear looks very authentic, and the structures and environments look realistically weather-beaten as well. The character models are detailed overall, though their faces are rather plain. On the other hand, details such as reflections, lighting, and shadowing all look quite good.

In terms of the audio, BloodRayne has an interesting mix of music that fits the game's gothic theme well. The sound effects, especially those for the sounds of Agent Rayne feeding on an enemy, are crisp and effective. On the other hand, the voice-over doesn't really fit in well and could have been better.

In the end, BloodRayne is a good third-person action game that's pretty straightforward but has a few nice twists. It's fairly long, but it's also fairly repetitive, and Agent Rayne is so powerful that you'll only feel in danger during some of the boss fights scattered through the game. BloodRayne is visually impressive, and some of the gameplay mechanics are cool, but the nature of the levels means you won't be getting much replay value out of this one, which makes BloodRayne ideally suited for rental. 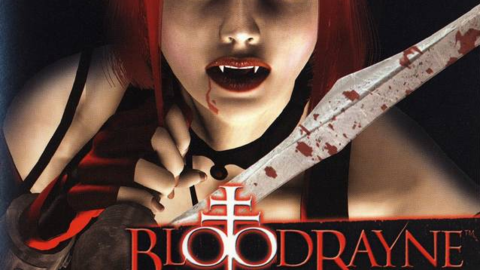 BloodRayne is a good third-person action game that's pretty straightforward but has a few nice twists.