Blood and Truth Review - On The Move

London Bridge is falling down.

As it's a first-person shooter, it's not hard to imagine Blood and Truth working without VR. But the ways it reinvigorates some of the genre's mechanics also wouldn't be possible without it. Its first-person shooter action is still beholden to some of the inaccuracies and annoyances with PSVR and its less-than-precise tracking. But it also uses these forms of input to give you a satisfying amount of control over each firefight and the various activities between them. Whether it's tearing off grenade pins with your teeth or hanging from scaffolding while returning fire, Blood and Truth does an admirable job expanding on familiar shooter concepts while maintaining a comfortable VR experience.

Blood and Truth can only be played with two Move controllers. You're explicitly told to play from a seated position, and you’re given numerous points around your torso to interact with. Putting a hand to your chest, for example, will let you grab stored ammunition for reloading, while you can find handgun holsters on both your hips and slings for larger weapons behind your shoulders. Blood and Truth makes you move to reach the weapons you need at the moment you need them, while also making these movements easy and natural to remember.

There's a slightly long calibration process that helps make each of these motions smooth and accurate. A lot of care is taken to ensure that you're being tracked correctly at all times, which helps when you're flung into some fast-paced shootouts. The accurate tracking produces one of the most comfortable experiences I've ever had using PSVR. Although Blood and Truth doesn't completely eradicate some tracking issues (which are more hardware related), it entirely sidesteps common issues such as camera drifting and annoyingly erratic motion-tracking losses.

That isn't to say issues aren't frustrating when they do crop up. It's common to wrestle with a two-handed assault rifle and its attached scope while the game struggles to determine the angle that you're trying to aim at. This leads to numerous frustrating deaths when the situation demands more dexterity than the hardware is capable of providing you, deflating otherwise challenging encounters with failures that feel out of your control.

Blood and Truth almost successfully distracts you from this by giving you much more to do with your hands, enhancing its otherwise rote first-person shooting. Weapons such as a pump-action shotgun feel more satisfying to use when you're grasping the pump handle with your free hand and actively pulling back to reload after every shot, while a silenced pistol has tangibly more accuracy after you rest your free hand over to the side of it for added stability. Blood and Truth lets you get ridiculous with how you approach combat, too, allowing you to wield a powerful assault rifle in one hand and a sawed-off shotgun in the other at the expense of accuracy.

Your movement in Blood and Truth is limited, but that helps the action flow smoothly. Blood and Truth only ever has you facing in a direction it determines, giving you the control to move to predetermined areas in front of your or strafe to the side at the press of a button. There are no confusing segmented rotations to grapple with, so you're free to focus on how to navigate your way forward and use what cover is available in effective ways.

With this in mind, it's comforting that enemies can't find themselves in inaccessible spaces behind you, and you have enough choices in a firefight to keep it dynamic rather than simply on rails. Transitioning to new cover and the freedom you're given to make slight adjustments to your firing angles with strafing are smooth and responsive, letting you satisfyingly flank enemies with ease. There are some sparse stealth sections to break up the sometimes unrelenting action, giving you options to navigate through cramped office spaces or derelict apartments and pick off enemies with silenced weapons. It is exhilarating to string together a number of silent kills before being spotted, again highlighting how much space Blood and Truth gives you to work with despite being so restrictive with your movement.

When you're not poking your head out in between gunshots, you're doing anything from picking locks to shimmying your way across construction supports and crawling through open vents. Each of these actions (and more) make good use of the Move controllers, making your movements feel more intimate than they ever could with a standard controller. Lock picking, for example, tasks you with rotating one Move controller slowly and then using the other to quickly lock the pin in place when in the right position. It feels both precise and natural, and goes a long way to making the otherwise mundane action of unlocking a door surprisingly engaging.

Although Blood and Truth doesn't completely eradicate some tracking issues (which are more hardware related), it entirely sidesteps common issues such as camera drifting and annoyingly erratic motion-tracking losses.

The same can be said for the many ways in which Blood and Truth lets you climb around its many environments. You'll have to reach out to grab overhead bars or protruding rebar pieces from walls to gracefully pull yourself upwards, carefully making sure not to unclench both hands when you're dangling over a deadly plunge. Some set-pieces make use of this to create some memorable shootouts, as you hang for your life using one arm and frantically return fire with the other. Having to physically grip to hold on, while remaining aware of where your hands are positioned, makes these actions feel all the more natural and satisfying.

With some strong action and creative uses of VR, it's a shame that Blood and Truth fails to encapsulate all of this into a story that doesn't feel as disjointed and hokey as it does. Following the escapades of a London-based crime family under threat, Blood and Truth flicks through every gangster story cliche in the book. Moments of gravitas are undone by stilted voice acting and poor writing, while others can't decide whether they're trying to be a grounded crime tale or a globe-trotting James Bond imitation. Blood and Truth never settles on a consistent tone that helps move its story along, which make its narrative-focused stages (that feature no action) drawn-out and dull.

Blood and Truth is uneven, especially when it's determined to get you to focus on an uninteresting story while you're putting up with the shortcomings of VR. But the beauty of Blood and Truth is that it also does marvelous things with the platform. The addition of motion control make familiar and mundane mechanics engaging, while also breaking up the smartly designed first-person shooting and establishing a great rhythm to the six-or-so-hour campaign. Blood and Truth doesn't manage to stick the landing in all aspects, but it's definitely a step forward for PSVR shooters. 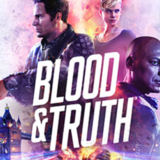 Alessandro finished Blood and Truth in two sessions, totaling around six hours. He was also ecstatic to find that a game finally had the courage to make vapes a collectible, because honestly, it's about time. Review code was provided by Sony. 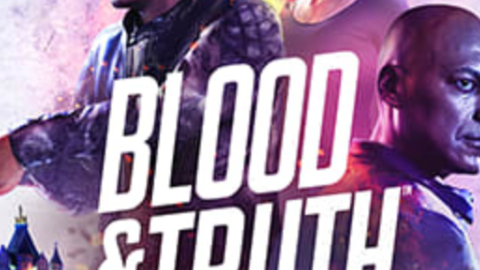