Blood & Magic's basic premise is entertaining enough that die-hard strategy fanatics may be able to overlook its interface problems.

A lot of things go into making a good real-time strategy game. Westwood's Dune II, perhaps the best example of the genre, featured novel gameplay, a great license, crisp graphics, loads of different units, and challenging level design. Since then, most of the titles released in the genre have been strong in some of these categories, and weak in the rest. By combining an excellent license and strong character design with mediocre graphics and irritating AI problems, Interplay proves that Blood & Magic is no exception to the rule.

First things first. Blood & Magic is the first strategy game to take advantage of the tried and true Dungeons and Dragons universe. Each of the game's scenarios (which must be completed in order of difficulty) features a different section of the gameworld, and takes you through different storylines. Static cutscenes detail the player's progress through each scenario as she tackles everything from the return of the living dead to a princess with marriage problems. Although the tales serve their purpose (they give you a reason for ordering around damned souls), they never really seem to take advantage of the richness of the AD&D game world. This sort of "make do" attitude pervades the gameplay as well.

Blood & Magic basically revolves around the creation of small polymorphs called basal golems. Created in a sort of "home base" area called the Bloodforge, basal golems form the backbone of a player's army by performing several rather varied functions. These useful creatures can: move about the screen (very slowly) and explore the world; attack enemy creatures or structures (which I wouldn't recommend if you plan on winning); sit still and generate mana (the "resource" of Blood & Magic); and, if next to a friendly structure, turn themselves into another unit type. Gameplay revolves around keeping enough of these little boogers alive to generate the mana you need to create more golems, while still leaving enough energy to transform a few of them into useful units - druids, wizards, wraiths and such.

This, in and of itself, is not the problem. The problem is, that in order to efficiently collect the mana from these creatures, players must highlight their icon, and click a "gather mana" button. That's right, every 30 seconds or so a player is expected to stop what she's doing and return to each of her basal golems to click a button. Not only is this mind-numbingly tedious, but it starts wearing on the wrists in no time at all. The golems will (after a minute or so) eventually discharge their mana on their own, but players needing it quickly (and players will just about always need mana quickly) will have to do it manually. Add this to the poor unit movement routines (trying to move a group of soldiers through a narrow opening can take what seems like forever) and you have a game that is never as fun as it seems like it should be.

Blood & Magic does have some strong points. Level design is well balanced and challenging, the available units are interesting and varied, and there's a two-player mode that allows network, modem, or serial connection play. Blood & Magic's sound is excellent, complete with a pleasant soundtrack that doesn't wear on your nerves, and superb sound effects that expertly accompany the onscreen action. Best of all, players can choose which side of a battle they wish to enter, a feature that doubles the product's play time.

Even with all its problems, Blood & Magic's basic premise is entertaining enough that die-hard strategy fanatics may be able to overlook its interface problems. Unfortunately for everyone else, the game's lackluster graphics and poor controls just aren't enough to make long-term play worthwhile. If you're really into AD&D, or you're looking to give yourself a case of repetitive stress syndrome, Blood & Magic may be what you've been waiting for. Anyone else will probably want to wait for one of the many other real-time strategy titles available later this season. 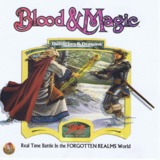 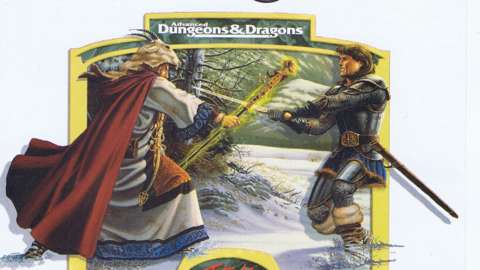 Blood & Magic's basic premise is entertaining enough that die-hard strategy fanatics may be able to overlook its interface problems.