While there's definitely a deeper overall package, it still lacks captivating gameplay, or characters you can even begin to care about--the two things you need most in creating an enjoyable platformer.

As Microsoft's first attempt to attach its name to a cute, cuddly, and double-jumping mascot platformer, 2002's Blinx: The Time Sweeper basically fell flat. Aside from the fact that Blinx, a Cheshire-looking kitty with time-control powers, was not a character with much personality, the gameplay exhibited multiple flaws that dampened the overall experience. Now, Microsoft and Artoon have reteamed to deliver Blinx 2: Masters of Time & Space. First and foremost, Blinx 2 is a much less restrictive and significantly deeper game than its predecessor. The addition of cooperative and competitive multiplayer does add some girth to the package, and some of the silly gameplay conventions that mucked up the last game are gone or have been retooled for the better here. However, while there's definitely a deeper overall package, it still lacks captivating gameplay, or characters you can even begin to care about--the two things you need most in creating an enjoyable platformer.

Perhaps the weirdest thing about Blinx 2 is that, despite the title, you never actually play as Blinx. Though the feline does make an appearance in a cutscene or two, generally, he's barely in the picture. So, who do you play as? Basically, a character (or characters) of your own design. Essentially, Blinx 2 begins with a storyline not too dissimilar from its predecessor. A giant time crystal has shattered, leaving tiny fragments all over the place. The heroic Time Sweepers--a team of time-monitoring cats who run a magical time factory--are on the hunt for them to prevent a temporal apocalypse. However, the archenemies of the Time Sweepers, the vile Tom Tom gang, are also on the hunt for the time crystals. Throughout the game, you play as the leader of a squad on either side of the equation--one of the Time Sweepers and one of the Tom Toms.

When you begin the story mode, you'll create a new Time Sweeper and a posse of Sweepers to accompany him. There's actually a pretty wide variety of character customizations you can make, from varying shapes and sizes for body and facial features to tons of different costume combinations. The same goes for the Tom Toms (you'll be able to create a team of them a little bit later in the game). The actual team initially consists of three other characters you can also adjust and edit as need be, though you won't see a whole lot of them during the actual story mode.

Essentially, the entire game is a back-and-forth storyline between the two sides. Both sides feature a very specific style of gameplay; the Time Sweepers, being the masters of time that they are, can control time much like Blinx did in the first game. Each Sweeper is equipped with a vacuum cleaner-like weapon that sucks up trash and then blows it out again as a projectile weapon. The Sweepers can also use collectible time crystals to use time to their advantage. You can speed time up, slow it down, stop it altogether, record a specific patch of time, or rewind it--all just like the last game. There's also a new melee attack that lets you simply whack at a nearby foe. However, the bulk of the new gameplay comes on the side of the Tom Toms. Most of the Tom Tom missions are stealth-based, requiring you to duck around and hide from Sweeper guards. Similar to the time powers, Tom Toms can use an assortment of special tools. These tools range from simple banana peels that trip up guards to grenades that open black holes.

While the two gameplay styles are different, all in all, the game plays very much the same the entire way through. Both teams are required to solve an assortment of very ordinary platforming puzzles, almost all of which are removed of nearly any critical thinking on your part, thanks to the game's relentless method of handholding. Most of these puzzles revolve around each character's time-shifting and spatial abilities, so sometimes you'll have to freeze time in order to set off a series of switches, or use a special spatial portal in order to navigate an obstacle while carrying some loot. These puzzles are not terribly tough on their own. However, for some reason, whenever you come upon a specific obstacle or puzzle, one of your team members pops up in the form of a little talking head, explaining to you exactly what you need to do. There are a few levels where the game inexplicably decides to actually let you think for yourself, but generally speaking, there is just no opportunity for you to ever really solve a puzzle on your own, as the game is dead set on practically doing it for you.

A lot of this seems to be partly a response to one of the biggest criticisms about the original Blinx--that it was just too frustrating. Of course, a big part of that criticism had little to do with the game's puzzles or gameplay, and rather it was that the game put a 10-minute time limit in which you had to reach your goal on each level. That time limit is totally absent in Blinx 2, though your completion time does factor into your grade at the end of a level. It seems like it would have been a fine balance for the developers to simply remove that time limit and add more challenging puzzles, but instead they decided that players need their hands held through every presumed challenge, and it is extremely irritating.

Apart from all the puzzle-solving, you will occasionally find yourself engaged in some team-based combat, as well as fighting an occasional boss. The team combat is just about the only time your team members ever really pop up during the game, though they aren't terribly useful. These sections of the game pit your entire team against an opposing force in a cheaply designed multiplayer map. Each one of these maps is absolutely littered with assorted weapon and health power-ups, and basically your goal is to eviscerate the other team. Unfortunately, these sections of the game are a plain and simple bore. The artificial intelligence of your teammates is erratic at best, and they tend to wander around a little too much to really ever be helpful. Thankfully, your opponent's AI isn't any more spectacular, so it isn't very hard to just run around shooting everybody without taking much damage. Of course, that still doesn't make it much fun, but at the very least it tends to make these parts fairly brief.

The reason these sections of the game take place on generic multiplayer maps is because Blinx 2 actually does feature a multiplayer component. Outside of the story mode, up to four players can participate in some free-for-all or team-based deathmatch action with teams of their own design. Unfortunately, a four-player split-screen version of the same boring team battles from the story mode isn't any better. Interestingly enough, Blinx 2 also includes a cooperative, two-player version of the story mode that you can access any time you boot up a loaded save. The puzzles actually change slightly, making them more conducive to a two-player experience. However, the co-op just isn't executed well. The changed puzzles are still as easy as ever, and there are lots of little sloppy issues that seem like the result of rushed implementation. For instance, during one training sequence, you have to learn how to operate the "record" mechanic by standing on two switches at the same time, using a recorded body double of yourself. While in single-player mode you would have to learn this, but in co-op the other character is actually still standing around on the training level and can simply hit the other switch for you without ever having to use the record ability. Silly stuff like this just makes the whole mode have a slapped-together feel.

The other big issue with Blinx 2 is that it is completely devoid of any worthwhile personalities. Blinx may not have been an especially remarkable hero, but now you're playing as your created characters, which barely speak any lines and hardly participate in any of the game's cutscenes. It's almost as though you're an incidental factor in the game's storyline, and it makes it intensely difficult to really get into any of what's going on. It also doesn't help that none of the side characters are very interesting either. The leader of the Tom Tom gang is the archetypal, "Argh! I'm angry!" boss man, shouting constantly about nothing of any amusement or interest. Similarly, there's no one to latch onto on the Time Sweepers side either. Apart from an adorable-looking kitty with a mustache, all of the Time Sweepers seem completely interchangeable, including Blinx himself. It's like the series got a personality-replacement surgery, but the doctors forgot to actually put in a new personality after slicing out the old one.

There's not a whole lot to Blinx 2 visually, either. The graphics are pretty good as a whole, but similar to the characters, there's nothing that really grabs you. The character models look decent enough in cutscenes, despite some fairly off-kilter lip-syncing. However, they don't animate that well and generally don't seem all that detailed. The enemy designs suffer from basically the same problem as the original Blinx, in that they're all very generic and don't stand out from any other platformer's roster of baddies. On the plus side, the in-game environments do look good, and they certainly feature more in the way of exploratory areas than in the last Blinx. But, again, you never really need to explore much, since the game pretty much tells you exactly where you need to go and what you need to do at all times. The one notable improvement to the visuals in Blinx 2 is that the frame rate has improved quite a bit. It still chugs during especially character-heavy multiplayer sequences, but it rarely drops during the story mode.

Another big part of the game's personality problems comes from the audio, namely the voice acting. Again, all the characters are almost completely interchangeable, mainly because none of the actors give the characters any unique spins. All the Tom Toms are greedy, grunty, goofy bad guys, and all the Time Sweepers are heroic, straitlaced, droll good guys. The music in the game is also pretty generic. There are a couple of mildly catchy menu tracks here and there, but mostly it all feels very underwhelming.

There was definitely an opportunity in Blinx 2 to turn the Blinx brand name around into a quality product, but that opportunity has been wasted here. The additions made to the game seem largely perfunctory when you consider that the underlying gameplay is still quite dull, and that the game simply lacks an engaging storyline or characters worth caring about. The fundamentals needed to make a quality platformer just aren't here, and thus, Blinx 2 is a game you should probably pass on. 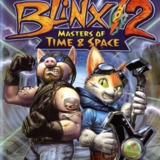 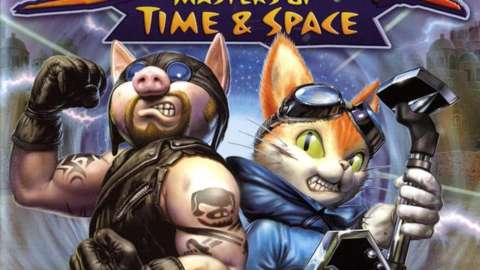 While there's definitely a deeper overall package, it still lacks captivating gameplay, or characters you can even begin to care about--the two things you need most in creating an enjoyable platformer.