Unceasing combat is the driving force of the fast and challenging Bleed.

Robotic spiders are a menace that must be stopped. When an eight-legged monster exterminates humans instead of the metallic mosquitoes it should be hunting, no one is going to complain if its death is quick and silent. But if you can exact revenge with style, that's all the better. In Bleed, flashiness is a virtue. Sling a murder of missiles towards the aggressive arachnid while slowing down time to avoid its retaliatory blows. When caught in a pinch, glide away from danger. Just don't let go of that trigger for a second. Bleed is a relentless adventure that houses impressive depth beneath its excitable exterior.

Wryn has a bad case of hero envy. The six greatest heroes in history have become monstrous versions of their former selves, fueling a self-referential story of conquest. Altruism is not Wryn's driving force; rather, she craves the glory that comes from saving the populace. So you embark on a seven-stage quest to rid the world of pustulating blobs, malevolent worms, and any other vile being unlucky enough to meet the wrong side of your flamethrower.

Bleed is an action-centric platformer in which any moment you spend not firing bullets is time wasted. With a limitless supply of ammunition and a weak gag reflex, you plow through an unceasing horde of attackers, never taking so much as a minute to reflect on all the bloodshed you've caused. It's that inexorable march that makes Bleed so engrossing. The soaring pace of combat pushes you continually forward. Rooms connected by the memories of fallen creatures lead you down the violent path you've chosen. Slay a nest of swirling plasma balls before exterminating feisty cats and then fleeing from a stalking helicopter. But don't think Wryn is happy with running away. Seconds later, you square off against the whirlybird in a short-lived battle as you quickly prove that mere machinery is no match for your guile.

Bullets will only get you so far. Wryn is not only an expert marksman, but has super-heroic jumping ability as well. Double jumping? That's for amateurs. Triple jumping proves that you're serious about your work. Throw in a handy wall jump, and Wryn can stay airborne for long enough to clear out an entire room. Jumping isn't limited to vertical flight, either. You glide in whatever direction you tap, which allows you to smoothly dash past laser beams or egg-spewing craters while cutting down enemies from any direction. The satisfying movement in Bleed helps invigorate the experience. Shooting and jumping are handled so deftly that, once you understand Wryn's abilities, you can quickly eradicate your foes without taking a whiff of damage yourself.

When things get hectic, you have a special power to fall back on. Wryn can slow down time, and this makes it even more exciting to dodge the many obstacles around you. Patrolling particle guns and alarming laser grids force you to slow things down so you can move by unscathed, and this urges you to move more deliberately than you would during the raw action moments. However, it's in the boss fights that your power becomes indispensible. The evil foes move in patterns that force you to make use of Wryn's impressive abilities. You may need to slow down time to avoid sporadic gun spray or triple leap to dodge a screaming fist, and it's empowering to survive these tricky battles.

You earn credits by killing enemies as efficiently as possible, and you use your wealth between levels to unlock better gear. Buff your health or slow-mo bar if you're dying too quickly, or unlock better guns if you crave more variety. Explosive mines and a ricocheting laser are good alternatives to the pistols and rocket launcher you start with, and it's fun to mix and match your various weapons. It is unfortunate that you only have two in your inventory at a time and have to go to the pause menu to access the rest. Switching between guns is exciting, so it would be great if you could unleash your full arsenal against a boss. Still, there's enough firepower to keep you invested in your killing spree even after the ending credits roll.

It takes less than an hour to plow through Bleed, but there are reasons to test yourself on the hardest difficulty settings. You won't come close to maxing out your weaponry your first time through, so you have to kill many more foes if you want to see all the toys Wryn can play with. Plus, higher difficulty settings mix up enemy placement and attack patterns, so if you think you know everything, you're in for a rude awakening. Finally, if you're skilled enough, you get new characters to play around with. These have different traits than Wryn, giving you even more variety if you haven't tired of killing yet.

Variety is one of Bleed's greatest strengths. Levels shuttle you down a dangerous elevator shaft, across racing trains, and into the belly of the beast. None of these are particularly novel, but they do well to mix up the action as you pop-pop-pop your attackers. One hiccup is the two-player mode. The camera is locked on player one, so it's easy to leave your friend behind. Plus, Bleed is at its best when you've mastered your move set and can unleash hell on those conniving monsters. Adding another player just throws a wrench in your spokes.

There's little in Bleed that hasn't been seen before. But even though it hasn't reinvented how we kill baddies in two dimensions, it's still a fun and satisfying adventure. For just $5, you get a few hours of fast-paced combat, and there's punishing side missions tucked away for those who crave a challenge. Think you can get through the entire game without dying? Tight mechanics make it possible, but it takes dedication to earn that triumph. Bleed is an energetic tale of heroic conquest. 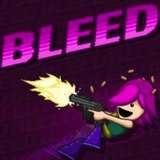 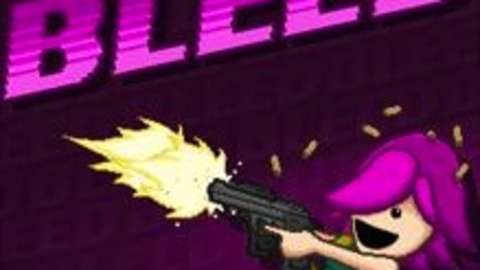 Bleed is an action-platformer focused on stylish, acrobatic dodging and fluid, challenging gameplay.