Who is Ichigo Kurosaki? Why is Rukia Kuchiki doomed to die? Is Hueco Mundo a person, place, or thing? If you can answer these questions, then you have a good chance of following the action in Bleach: Soul Resurreccion. The disjointed Story mode in this licensed beat-'em-up makes no effort to welcome newcomers, and even dedicated fans might be surprised at the episodes this game picks and chooses from the popular manga and anime property. The cast list is big, and the visuals are crisp and colorful, making for some satisfyingly flashy moments. Yet these moments are the exception to the rule, as the bulk of Soul Resurreccion consists of simplistic and repetitive combat against uninteresting foes. The game quickly settles into a rut that it never emerges from, squandering the worthy source material with its dull action.

Story mode in Soul Resurreccion begins after the war with the Soul Society. Each of the 14 episodes begins with a short narration that describes what has happened since the previous episode and sets up the events to come. These brief snippets are enough to help Bleach aficionados find their place in the story, but those unfamiliar with the franchise are left in the dark. There is no attempt to even briefly explain the world, the characters, or the major plot points. You play as 10 different characters over the course of Story mode, with a host of others showing up either in boss battles or in hasty midlevel voice-over sequences. These narrations routinely attempt to deliver important revelations or deepen the relationships between characters, but they are so disjointed that it's hard to weave them into the greater narrative. Story mode plays out like a highlight reel, but it relies entirely on your previous knowledge to infuse the proceedings with a sense of drama. There are tender moments, desperate struggles, and climactic battles aplenty in Bleach, but Soul Resurreccion doesn't capture them; it merely references them.

Aside from short narrations and midlevel dialogue, Story mode is all about combat. In each episode, you battle your way through hordes of minions en route to a showdown with a boss character. Even if you don't know a Hollow from an Arrancar, the enemy designs are initially striking. Bony airborne fish swim above ghoulish brutes and toothy monstrosities, while a robed Menos Grande glares down from the height of a six-story building. Bleach's cast of characters is diverse, and boss fights feature an intriguing array of characters. The game's greatest strength is its visual appeal, and playable characters and enemies alike look sharp. Vivid colors and smooth animation infuse the action with some welcome energy, and the most powerful attacks in the game are gorgeously rendered.

Regardless of how nasty they look, most enemies can be beaten with repeated combo attacks that you can execute by tapping the square button. Pressure attacks (the triangle and circle buttons) drain some of your spiritual pressure gauge but pack a big punch and can be very helpful for cutting down groups of enemies at once. They look flashy too, but the biggest visual treat in your arsenal (and also the most powerful attack) is your ignition attack. This bad boy can be unleashed only when you've filled the ignition gauge and powered yourself up by tapping L2, but it does serious damage against minions and bosses alike. This modest repertoire changes from character to character, and it is interesting to see what kind of damage each one can do.

Unfortunately, it's not very interesting to actually deal that damage. You are much stronger than almost all of your enemies, and destroying them is as easy as mashing the square button. Some require a bit more effort, but your pressure attacks make short work of them. You spend the bulk of every level thrashing your way through underpowered foes or simply dashing past them on your way to the boss fight. End-of-level encounters require a bit more strategy, and some can get quite tough. Yet even then, combat is a relatively simple matter of blocking, evading, and then unleashing as many attacks as you can when you get the chance. A few stylish camera angles and frequent quipping from both characters fail to add much excitement to these showdowns.

Soul Resurreccion encourages you to improve your technique with a combat multiplier that prominently displays how many consecutive hits you've delivered. Push this number high enough, and you earn a bumper crop of soul points that you can use to level up whichever character you are using. These upgrades include boosts to attack, defense, and health, as well as occasional new abilities. Improving your characters can definitely make a difference in some of the tougher modes, and dedicated players can reap big rewards by sustaining their multipliers. Alternately, you can repeatedly dash back and forth through a crowd of enemies to artificially boost your multiplier and then dispatch them to collect your reward. It's not an elegant system, but the extensive upgrades available do provide something extra to strive for.

Leveled-up characters come in handy in Mission mode, where you can choose any unlocked character and tackle stand-alone episodes. These missions are generally more difficult than those in Story mode, but aside from the occasional restriction (for example, no jumping) or time limit, Mission mode features the same bland environments and stylish-yet-stupid minions. Once you beat 11 of the 28 missions, you unlock Soul Attack mode. Here you play familiar levels and fight familiar foes, only this time your soul point total is posted to online leaderboards where you can check out the competition.

You can certainly spend a lot of time working your way up leaderboards, beating every mission, and leveling up all your characters, but that involves a lot of dull, repetitive combat. The mild appeal of slashing your way through hordes of enemies and unleashing super attacks quickly runs out in Soul Resurreccion, because there isn't anything else to do. The crisp visuals are a pleasure to look at, but they come at the cost of frequent loading times that deflate whatever small momentum you might gather during the course of a level. Bleach: Soul Resurreccion tries to give fans of the anime the chance to play as their favorite characters in dramatic showdowns, but the lackluster combat and poor Story mode structure keep it from delivering. 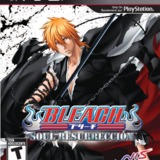 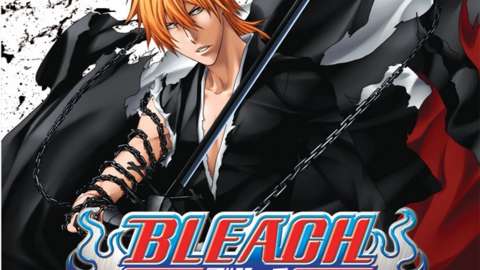 Single-handedly destroy an army of monsters and evil spirits in Bleach: Soul Resurreccion.