Bleach: Dark Souls improves upon what was already a fantastic game, and belongs in your fighting game collection.

Last year, Bleach: The Blade of Fate brought a top-notch, 2D fighting game experience to the Nintendo DS. Bleach: Dark Souls, its sequel, sports the same great fighting engine, graphics, and combat features as the original, with the core improvements being little else than "more" of everything, as well as better balance. This doesn't take away from the fact that publisher Sega and developer Treasure have set the standard for fighting games on Nintendo's popular handheld.

Dark Souls includes a storyline specially made for the game that takes place in between the first two seasons of the anime series on which it's based. It may leave those unfamiliar with the show or the first game a little confused, but on the flip side, it offers a great way for new players to learn and master its many mechanics. The Story mode includes tutorials, as well as one-on-one, two-on-two, and one-versus-many fighting. It also includes item collection missions, hazard evasion missions, and even "quiz show" missions that require you to stand on a certain area of the arena to answer a question flashing on the screen--all played within the 2D fighting engine. This odd combination of mechanics leads to some amusing moments, such as knocking a fellow quiz show contestant out of his desired area just before the answer timer sounds. Progressing through the story grants you special unlockables or money with which to buy art, character colors, and more from the game's shop.

The core action is so good, though, that you might find yourself rushing through the missions--or skipping the Story mode entirely--to get to the meaty, traditional fighting within. The experience will feel similar to the controlled chaos found in the Guilty Gear series. For those of you unfamiliar with that formula, each of the game's 40-plus characters (many of whom must be unlocked) has a plethora of standard abilities and unique attacks. They will have you dodging, double-jumping, air-dashing, or hopping back and forth between two movement planes. You'll also chain normal moves and cancel special moves into supermoves on your way to learning devastating multihit combos. The only problem with all of the techniques afforded to you is that it can be a little daunting to learn it all. Even the opening tutorial--which uses walls of text to explain the three separate meters along with the game's spirit card system--might initially leave you befuddled.

The sprit card system is arguably what sets the Bleach fighting games apart from others, however, so you'd do well to learn its ins and outs. Once you get past trying to read about the system and put it into practice, it's actually simple. You construct decks of spirit cards--activated in battle via the touch screen--according to the limitations set by "frames," which govern how many cards of each type you can carry. Cards span all types of powers, from mundane ones (slow down your opponent or lower his defense) to odd ones (force your opponent into a crouching stance). They can also be unlocked during Story mode and purchased from the shop. What's good about this system is that it adds a random and potentially tide-changing element to the gameplay without making the core fighting too chaotic or simplified. It's also rebalanced from the first game, not allowing players to rapidly play card after card in succession.

The rebalancing is a godsend, particularly when you get to the heavy competition you'll find online. Dark Souls lets you pit your skills in two- to four-player battles both locally and online, giving you a bunch of battle customization options to boot. Don't like spirit cards? Want to keep the fighting on one plane of movement? Feel like seeing who can cause more damage in five minutes? All of those options and more are available to you. Ranked matches are there, too, so you can brag about your national spirit power ranking and tag strangers you enjoy fighting against as rivals with the click of a button after a fight. While much of the online fighting works better than the first game, occasional lag can render some matches only half playable--even with a strong connection during four-player extravaganzas to start crawling at random points. On the bright side, the lag is noticeably less apparent than in the previous game.

Online variances aside, Dark Souls moves at a brisk pace supported by its fluid visuals. The game zooms out to widen the playing field when appropriate and handles the technique beautifully. There's never any slowdown or random, disorienting zooming. Up close, every character is (appropriately) large, animates smoothly, and faithfully re-creates details found in the anime. The more grandiose special attacks look fantastic, with screen-filling special effects and sprite manipulation abounding. Treasure paid attention to the more subtle points of the visuals as well, making sure that Chad's shoulder armor stays on the correct shoulder regardless of which direction he faces. The sound holds up its end of the bargain nicely, with all of the characters being voiced by their anime counterpart (though purists will probably wish for a Japanese dub option).

Bleach: Dark Souls may not completely innovate on its predecessor. However, more finely-tuned balance, along with a ton of new cards, abilities, and characters make this game a worthy purchase for veterans, as well as neophytes. Even taking into account imported fighters and Gameboy Advance compatibility, this is arguably the pinnacle of Nintendo DS fighting games. 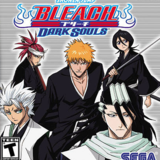