What Blazing Lazers lacks in subtlety, it makes up for with sheer orgiastic firepower.

One of the first games published for the fledgling TurboGrafx-16 console in 1989 was Blazing Lazers, a space shoot-'em-up developed by Compile--the group that would later go on to make such legendary games as M.U.S.H.A., Robo Aleste, and Space Megaforce. Blazing Lazers was immensely popular back in the day, and now that it's available for the Wii's Virtual Console, it's easy to see why. Even though the game isn't as nuanced or as aesthetically pleasing as some of the TG-16's other shoot-'em-ups, it manages to keep the screen jammed with enemies and puts you in control of a ship that can lay waste to those unfortunate invaders with a ridiculous orgy of firepower.

For the most part, Blazing Lazers is a typical vertically scrolling shooter, in which you pilot a lone spaceship and try to dodge or shoot at the enemy ships that fly into view from all directions while the screen continually scrolls downward. In each of the game's nine stages, you'll go through wave after wave of regular enemies, fight a midboss, go through some more regular enemies, and then take on the main boss of the stage. You move the ship around with the directional pad, press one button to fire your main weapon, and press the other button to unleash a blast from your limited stock of bombs. A single collision will destroy your current ship, take away one of your lives, and resurrect you in a new ship some ways back from where you met your earlier demise. By picking up the capsules that enemies leave behind, you can change weapons, upgrade your current weapon, and add useful gadgets to your ship. The four weapons include normal bullets, a triangular wave shot, twisting lightning bolts, and rotating iron balls. The different gadgets include a shield, homing missiles, tagalong gunpods that double your firepower, and a sweet device that increases the strength or homing ability of your main weapon based on which one you have equipped. That's a nice selection of weapons and gadgets, although it really doesn't matter what weapon you have. They all blanket the screen with firepower after you collect a few of the capsules that enemies so frequently drop.

That wealth of firepower may be good or bad depending on what you're looking for in a shoot-'em-up. It's a great feeling to have control over such a beast of a ship, but the enemy doesn't even begin to match your destructive output until you're roughly two-thirds of the way through the game. For the first five stages, you'll obliterate most enemies before they have a chance to fire a single shot, like in The Last Starfighter when Alex used Death Blossom, and you'll only need to watch out for the occasional lucky bullet or errant piece of space junk. Midway through the sixth stage, the game finally starts putting your reflexes to the test by dishing out an ebb and flow of stronger, faster enemy ships and thicker clusters of gun turrets. Subsequent bosses also hide their weak spots longer and tend to fire off beams that your shields can't protect you from. The last third of the journey is a tense dance that will make you wonder what happened to the lopsided romp that you began playing some 25 minutes earlier. Up until that point, however, you may experience the occasional bout of boredom if you're not the sort of person that enjoys easily laying waste to scores of flimsy alien ships.

Blazing Lazers is certainly an appropriate title for a game that keeps the screen busy with space ships and laser blasts. New enemies are introduced in every stage, so you're not always shooting at the same baddies, and the bosses get progressively more bizarre as you make your way to the final showdown. Throughout it all, the action never hiccups or crawls. However, in order to keep the screen busy with stuff for you to shoot at, the developers literally put all of the CPU's horsepower into moving objects (ships, bullets, and explosions) at the expense of the backgrounds. You'll observe different space stations, star fields, and rocky planet surfaces as you go through each stage, but they're all rather lifeless and mainly just scroll by apart from the occasional token structure that you can destroy. Meanwhile, the highlight of the audio is the game's music, which is futuristic and has an optimistic quality to it that makes you feel good about slaughtering aliens wholesale. The sound effects consist mainly of an unremarkable collection of "plinky" laser and collision noises that hark back to Xevious or some other classic shooter produced in the early 1980s. Brief vocal comments accompany each weapon pickup, but they lack zest because they're recorded at a miniscule volume. As you'd expect, the Wii emulates the game without any problems.

From start to finish, the game clocks in with nine stages that each take roughly five minutes to get through. Extra lives are easy to earn, and you get four continues on top of that. Of course, while you can theoretically finish the whole thing in 45 minutes, you'll likely need a few practice runs before you're good enough to overcome the last couple of stages. Unfortunately, the game doesn't offer a two-player option, and there aren't any extra modes (such as a score attack or boss rush) to kill time with. Since you can't play along with a friend and there's just the one play mode, Blazing Lazers probably isn't going to captivate you for weeks at a time. For at least a few days, though, you'll spend a sufficient amount of time blowing stuff up and working your way through the final hellish stages that you'll ultimately feel that the 600 Wii points ($6) you paid to play Blazing Lazers on your Wii was worth it. 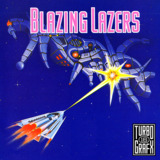 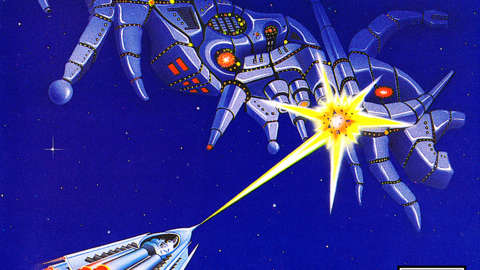