For Saturn owners looking for something other than the usual mix of fighters and shooters, Blazing Dragons is a good bet.

Graphic adventure games for console systems are few and far between. This fact alone makes Crystal Dynamics' Blazing Dragons a welcome break from the usual mix of action titles. While Blazing Dragons doesn't have the most innovative gameplay around, it is full of bizarre twists on the usual chivalrous knight stories and fairy tales. It also has plenty of chuckles in it, though not much in the way of fall-off-your-seat-laughing humor.

The premise for the game is a twist on the old knight vs. dragon theme: The knights are the bad guys here, and the dragon Flicker (you) is the good guy. Flicker, the court inventor for the dragon kingdom of Camelhot, must journey through the land solving puzzles in his quest to become a knight - all so that he can enter the upcoming dragon tournament and gain a shot at winning the hand (claw?) of the love of his life. Of course, there's the requisite treachery, this time in the form of the vile humans, to deal with. A kingdom's at stake after all.

The game has a cartoonish, rather simplistic animation style. Even so, the dragons have a disturbing look (they're strange creatures, with four legs and two arms). A lot of the dialogue is droll, and the music isn't anything to write home about. Control is very simple. One button determines the actions (use, look, move, and talk), and another button performs this action on the part of the screen the pointer happens to be over. The puzzles revolve around using the right item in the right place. This means players end up moving from scene to scene grabbing any item that isn't nailed down, then figuring out what it's for later. As for character interaction, to talk to the bizarre and goofy creatures, players must choose a line of dialogue from a list that appears whenever a conversation is started.

For Saturn owners looking for something other than the usual mix of fighters and shooters, Blazing Dragons is a good bet. It's not particularly impressive in any respect, but the game is fun, with a lot of fairly obscure puzzles to solve, oddball characters to meet, and plenty of bad jokes to go around. 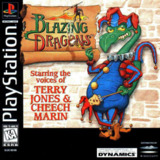