Blazing Angels 2 is a clear improvement over the previous game, though history buffs will probably hate the game's fictional missions.

Blazing Angels 2 is a fairly straightforward mission-based flight game set against the backdrop of World War II, much like its predecessor was. But instead of sticking to the facts like the first game tried to do, the sequel heads off into that not-so-lofty "what if?" territory that World War II-themed games eventually seem to get to, where Nazis are either resurrecting dead humans and making horrific zombies, or building huge Tesla coils and prototypical laser cannons and other then-impossible technology. This game goes for the latter, giving you a bunch of prototype technology to fly and fight against, some of which was just out of reach back in the 1940s. At the same time, a handful of improvements make Blazing Angels 2 a better game than the previous release, though some spotty difficulty progression makes the single-player a little uneven.

The story and characters from the first game have been tossed out, though the basics are the same. You play as Captain Robinson, and you quickly hook up with some wingmen to form an elite squadron that gets into the places that other, lesser pilots couldn't touch. Your team gets involved in some hairy scenarios as you track down a German special weapons division that's turning out a bunch of new technology vital to the fight. So along with protecting key civilian targets in major American cities and bombing bases, you'll also have missions where you have to take out airfields, then land to steal prototype planes and escape. You'll also guard escaping trains, shoot missiles out of the sky, and even take on huge bosslike crafts, like plane-spewing zeppelins, big cannons aimed at Red Square, large Tesla installations, and so on. The game does a good job of moving you around from place to place, which keeps you from getting bored of any one area and constantly has you doing different things in different planes.

Of course, it all eventually comes back to you dogfighting enemy planes. Not too far into the game's 18-mission campaign, you start getting secondary weapons like rockets. You get a lot of rockets and it's a snap to replenish your supplies, so at this point, your machine guns become almost totally useless. You later get homing rockets that make blowing up enemy planes a trivial, meaningless task. This means that most of the game is so easy that you'll finish missions on the first try, though that feeling of extreme air superiority fits with the spirit of your elite squad. The lone exception is the eighth mission, which has you guarding Moscow's Red Square against German attackers. The game isn't particularly clear about what you need to do to protect the square from being destroyed, which makes this one mission a little harder than the rest. But for the most part, it's smooth sailing. A little too smooth, perhaps.

You'll upgrade your planes as you play using points earned in each mission, and you should have more than enough to buy everything by the end of the game. Different upgrades include better gun sights, faster-firing machine guns, armor and maneuverability enhancements, and so on. One upgrade makes your missiles explode if they get close to a target, which means you don't even have to score a direct hit to take out most planes. In combat, you'll be able to order your wingmen around a bit, and each guy has a special ability, just like in the previous game. One wingman will come back and taunt enemies to give you some breathing room, a skill you'll probably never actually need. Another will go on an aggressive attack and take out a handful of enemies, which is much more useful. The third is a mechanic that will occasionally repair your plane, though unlike in the first game, you don't have to hit a sequence of onscreen buttons to perform the repairs--he just fixes it automatically at checkpoints.

The single-player campaign is pretty satisfying, though it won't take too long for players to bust through it, and you'll probably earn almost all of the campaign-related achievements as you go. That's not automatically bad, as flying around and blowing up everything in sight using a variety of destructive tools is actually quite fun. There's also a multiplayer side to the game, and it offers a lot of different modes and options for solo flights, team games, and cooperative play. The catch is that there seem to be very few people playing the game online, and aside from a solo dogfight here and there, it seems impossible to find anyone playing in any of the other modes. For what it's worth, the multiplayer matches we were able to actually get into weren't very exciting. Many matches take place in skies filled with little power-up icons that you can collect to reload your weapons, repair your plane, get double damage, and so on. The power-ups just don't really fit with the vibe of the rest of the game and make the whole thing seem a little hokey. On top of that, if you have a laggy connection to other players, they'll skip around so badly that no one will be able to hit each other. Being able to play cooperatively through the campaign missions is an attractive offer, though, so it might be worth convincing a handful of your friends to get a copy so you can all play together.

Blazing Angels 2 looks a bit cleaner and more colorful than the first game. The ground looks nice, even up close, and the various plane models look realistic. You can go in and swap around the colors for each plane and also unlock additional paint schemes. The game's effects and explosions look OK, and for the most part the game has a good, smooth frame rate. The audio gets a little too repetitive in spots, as the main theme for the game seems to play every few minutes in one form or another, eventually getting a little grating. There's a lot of voice acting throughout the missions and a handful of between-mission cutscenes, and most of it is good enough. You might not like the movielike feel the game is going for, though, because the Germans and Japanese have really awful accents and speak English most of the time.

Blazing Angels 2 is a very clear improvement over the original game, though the balance has swung over to the easy side in this sequel. And, of course, if you like your WWII games to be historical and rooted in fact, you probably won't enjoy flying a prototype jet under the Golden Gate Bridge very much. But if you're after a loose, simple game where you get to fly a lot of different, crazy planes and blow up a billion German fighters, you'll probably have a good time. 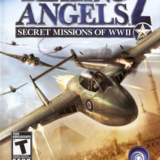