Last year, the deep and wild 2D fighting of BlazBlue: Calamity Trigger made the game a favorite among those who like their characters crazy and their action complex. BlazBlue: Continuum Shift is more of a refinement of the original game than a full-fledged sequel. It introduces some great new modes that make the action more accessible to newcomers, and the new characters and balancing refinements ensure that this is the version of BlazBlue you should own.

As with Calamity Trigger, the greatest asset to Continuum Shift is its tremendously diverse roster of fighters. With 12 returning characters, two new ones available from the start, and a third who can be unlocked or purchased, BlazBlue doesn't have the largest stable of fighters to choose from. But what it lacks in number it more than makes up for in variety. Each fighter feels significantly different from the others, and they run the gamut from accessible characters with movesets that will feel quickly familiar to anyone who has spent time with fighting games, to characters with truly strange abilities that make them considerably more difficult to master. Among these are three new characters who fit right in. Tsubaki is a swordswoman with a shape-changing blade who has some effective combos that are easier to pull off than those of other characters, and whose special ability temporarily increases the power of her special moves. Hazama is a snappy dresser and one of the tougher characters to play effectively. He can unleash a snake-like tentacle called Ouroboros which lets him close the distance between himself and his opponents very quickly. Mu, the unlockable character, is an outlandishly armored fighter whose special ability is placing turrets that blast her opponents. If placed strategically, these can make for some very effective traps, and make her a force to be reckoned with in the hands of those who can use this tricky mechanic well.

Each character has weak, medium, and strong attacks, and a drive, which is a special ability. Those unique abilities are the most dramatic thing that sets BlazBlue apart from other fighting games. On top of that, there are a large number of other mechanics in BlazBlue that can be daunting for newcomers. Heat gauges, barrier gauges, guard primers, and more are on the screen at all times, and making sense of all this is not easy. Making things more difficult is that BlazBlue's fighting system is technical, placing a heavy emphasis on cancels, juggles, and long combos that cannot be escaped. Those who spent a lot of time with Calamity Trigger may notice Continuum Shift's adjustments, but one the whole the refinements are quite subtle. There are new moves for each character, as well as changes to the way the game handles some of the more advanced techniques, yet Continuum Shift's core mechanics feel very much like those of its predecessor, which is no bad thing. It does mean that BlazBlue remains one of the more inaccessible fighters out there, though, and it can be intimidating, even for those who have spent lots of time with other fighting games. Thankfully, Continuum Shift introduces a few modes that make learning the ropes somewhat easier.

The Tutorial mode goes over everything, from the most fundamental basics of character movement, to detailed information about each character's specific movesets and combos, letting you select only those lessons you think might be of use to you. The lectures about all of the various game mechanics are a bit dry and long-winded, but the Tutorial mode is nonetheless a welcome addition. It's also nicely complemented by another new addition, the Challenge mode, which which makes you perform a series of increasingly difficult combos with your selected character. You can display the command inputs on the screen and watch a demonstration of the moves if you're having difficulty nailing the timing. Together, these two modes make an effective and full-featured training tool.

In the end, though, the only way to really learn how all the pieces fit together is to get down to the business of fighting, and BlazBlue gives you a number of ways to jump into the fray. There's a standard Arcade mode that lets you fight it out against a series of opponents with a hint of a story for each character. There's also a much more elaborate Story mode, in which you play as all 14 of the initially available characters. The tale is nearly impenetrable, and it's told in such a bland, uninvolving way via conversations between character portraits that it's impossible to care about it, which seems strange given how much anime-influenced over-the-top intensity is present in the fighting. A good story isn't a necessity in a good fighting game, but BlazBlue puts so much emphasis on its own story that the game definitely would have benefited from some more dramatic flair in the telling.

There's also a pure Versus option for battling the computer or your friends, a Score Attack mode, and a mode called Legion, which is essentially a survival game type in which you move from space to space on a map, recruiting new fighters to your army from the ranks of the armies you defeat. It's a neat idea, but it feels underdeveloped, and since it can be played only against the computer and it never changes, there's little reason to come back to it time and again. Like just about any fighting game worth its salt, this game is at its best when played against human opponents, and like its predecessor, Continuum Shift boasts excellent online play. You can jump into player matches or ranked matches or create your own lobbies for up to six players. Matches can be configured with a variety of options, and while lag can be an issue in some matches, the game lets you filter searches by connection speed, which proved in our experience to be a useful way of seeking out opponents we could battle without any noticeable lag.

BlazBlue's distinctive and beautiful visuals make it almost as interesting to watch as it is to play. The two-dimensional characters are gorgeous, with intense colors and a level of detail that makes them practically pop off the screen. The backgrounds, which combine two-dimensional and three-dimensional elements, fuse the old-fashioned and the futuristic to fascinating effect and provide a lovely and memorable backdrop for the action. The action may actually be overstimulating at times, with so many dramatic effects accompanying so many of the attacks, but all that visual craziness lends BlazBlue its own unique flavor of intensity among fighting games. The sounds are similarly bold and energetic, with the announcer frequently shouting "Counter!" and the combatants exchanging compliments and insults throughout each fight, while the stirring score matches the exuberance of the visuals.

With Super Street Fighter IV and now BlazBlue: Continuum Shift, $40 seems to be the going rate for fighting game follow-ups that add enhancements and refinements rather than provide the amount of new content that would justify full price. With only three new characters, this is a tougher sell than Super Street Fighter IV, and given its unabashedly technical mechanics, some players will still find it too arcane for their tastes. But if you are looking for a fighter that's distinctly different from the Street Fighters and Mortal Kombats of the world, Continuum Shift makes it easier to get into BlazBlue than it was before. And if you're already a BlazBlue fan, the new characters and balance tweaks make this the better version of the game. 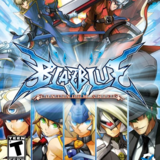