BlazBlue is a worthy successor to Guilty Gear. It's also a fast-paced, colorful fighting game with a lot to offer.

For many years, Arc System Works quietly earned a fan following with the flashy 2D fighting action and totally over-the-top characters of the Guilty Gear series. The studio has started anew with BlazBlue: Calamity Trigger, a new game with new characters and an evolved fighting system that adds to Guilty Gear's basics. Unfortunately, there are only 12 playable characters in this one--a smaller number than most conventional fighters. Still, they're all very different from each other--and as you might expect from Arc System Works, a few of the characters are completely insane. While you may have trouble wrapping your head around the game's crazy cast and its many different gameplay nuances, which have such esoteric names as "drive attacks" and "guard libra," you'll find plenty to do with the many different offline play modes--plus robust online play that works great. BlazBlue may not be the easiest fighting game to get into, but it still has a lot to offer.

Like the Guilty Gear games, BlazBlue is a fast-paced 2D fighting game with multiple attack buttons--three are for standard attacks of varying strength and the fourth is the drive attack, which produces an entirely different effect for each character. The character Jin's drive attack freezes his enemy solid; Ragna's steals his enemy's health with each strike. Every character also plays in a totally unique fashion, though there are callbacks to Guilty Gear's roster. The game's protagonist, the spiky-haired, sword-wielding bad boy Ragna takes cues from the spiky-haired, sword-wielding bad boy Sol Badguy. There's also a "big strong grappler who can't run" character in Iron Tager, who is similar to Guilty Gear's Potemkin. Then again, BlazBlue also features a grinning hooded catgirl with gigantic paws; an evil vampire child who hurls exploding, whoopee-cushion-shaped bats; and a masked blob that oozes its way into battle.

It's clear that the developer specifically intended for the characters to look totally different, as well as play differently, from each other. While this definitely makes the game seem new and makes each character seem distinctive, this uniqueness makes it harder for your skills to transfer from character to character, especially if your frame of reference is more-conventional fighters like Street Fighter or The King of Fighters.

However, if you're a Guilty Gear fan, or just a fan of sci-fi anime cartoons that have really strange characters, BlazBlue will feel like coming home. In fact, much of the fighting system is clearly based on an improved, faster version of Guilty Gear. Like in that series, BlazBlue lets you chain together multiple standard attacks, start juggle attacks that propel your opponents up in the air, and dash forward or backward both on the ground and in the air (with the exception of the aforementioned Iron Tager). There's a decent variety of strategies that work among the different characters--some have fairly strong defensive games, but more often than not, being able to mount a strong offense will serve you well. Fortunately, the game supports a strong offensive game with the standard chain combos (strings of normal attacks, or revolver action as they're known here), as well as extensive air juggling and a defensive blocking meter (known as guard libra, in this case), which determines how long you can block incoming attacks before your defense simply fails.

Thankfully, there are also many defensive counter options based on enhanced versions of previous Guilty Gear mechanics, such as the ability to use a well-timed defense to reduce the amount of time your character stays in blocking animation (known as instant guard); an active defense system (known as barrier); and a defensive counterattack setup that lets you turn the tide of battle (known as barrier burst). BlazBlue moves fast--sometimes dizzyingly fast--but if you can keep up, you'll find a good balance between offensive and defensive tools in your arsenal and tight, responsive controls.

In any case, BlazBlue is an attractive game with big, well-animated characters set against colorful background stages and flashy special effects. As you might expect from a Guilty Gear successor, BlazBlue has a wailing rock guitar soundtrack, and in any given match, both combatants are generally flying around shrieking the names of their mighty fighting styles while the game's announcer calls out successful defensive maneuvers and counterattacks. When matches get very intense between two characters with especially flashy moves, there's a great deal of loud noise, bright flashes, and ballyhoo onscreen that the scene borders on being confusing, especially to beginners who aren't already fighting game experts.

However, you'll be able to get the hang of it if you understand the basics of performing combination attacks, juggles, and defensive counters--and if you can tune out some of the fireworks. It'll also probably help if you tune out the game's needlessly elaborate terms for gameplay features (guard libra, barrier burst, revolver action, and so on) and its completely superfluous story, which puts Ragna in the center of some kind of futuristic postwar conflict among a bunch of different factions that never really affect the game.

However, the story does play into BlazBlue's offline Story mode, which offers an interesting new experience for newcomers and veterans alike, since it branches in different directions and offers different unlockable content depending on whether you win or lose to different opponents. The game also has Arcade, Score Attack, Versus, and Training modes, plus an unlockable gallery. There's also a replay option to save and watch offline and online matches, including matches from the leaderboards, which you can peruse for your entertainment, or study carefully to learn to be a better player. And BlazBlue has extremely strong online multiplayer that makes it easy to jump into ranked and unranked matches. The online lobby uses an icon-based interface that lets you quickly find other players with good connections, as well as players of similar experience levels in the game. Actual online play is quite popular at the time of this writing--there's plenty of competition out there, and if you're on a good connection, you'll probably experience very little lag, if any, during an actual match.

BlazBlue is weird, bright, and loud. The colorful artwork, wild action, and totally unique characters may intrigue you, assuming they aren't too much for you to handle. If you can get past the noisy presentation and bizarre characters, you'll find a very solid fighting game with plenty of offline options and excellent online play. 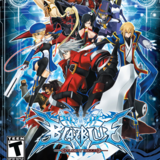