There's a good game here - it's simply hidden under many layers of frustration.

Sony's Blasto is the latest in a long line of games that attempt to distill the best that the 2D platform games of the past had to offer into 3D. With large, roaming environments that stream from the disc, Blasto does this in a different way than titles such as Super Mario 64, Tomb Raider, Crash Bandicoot, and Pitfall 3D, and the originality is certainly nice. The only problem is that it just doesn't make the leap into 3D as well as it could have. Well all right, that's not the only problem.

To take a few steps backward, the game is set in a universe obviously inspired largely by Warner Bros.' Marvin the Martian cartoons. It's full of walkways that float inexplicably, suspended in space, machinery complete with "Don't touch this button!" buttons, and all the other signature gags and pratfalls, and it is inhabited by spindly aliens and top-heavy monsters the likes of whom could very well be related to Marvin and his friends. To stop them all is Blasto, who's pretty top-heavy himself and comes across like a mix of cartoon stars The Tick and Space Ghost, both in look and personality. To drop another name into the pot, his quips are done by Phil Hartman (former Saturday Night Live cast member and the voice of The Simpsons' Troy McClure). Thankfully, he doesn't rattle on too much.

Unlike video game characters like Mario and Crash, Blasto is equipped with a ray gun to blast his foes. Holding the shoot button down for a few seconds charges the gun for a more intense blast, and a number of various power-ups are scattered throughout the game, which can provide him with limited time upgrades such as heat-seeking missiles, flamethrowers, and rapid shots. He stalks the floating platforms of space, sandy dunes, the watery depths of Uranus (yes, the obvious joke comes up repeatedly), and sewers and halls of an alien city, turning switches to open doors so that he can proceed on to new areas and firing on anything that pops up along the way.

That's the start of the trouble with Blasto. Instead of manning guard posts or doing rounds, the enemies in the game (there are two basic varieties - skinny walking aliens and flying saucers - and they both have guns) have a nasty habit of materializing in front of or, worse yet, behind you. If this were an infrequent occurrence, it wouldn't be worth mentioning, but since it happens all the time, it's fairly maddening.

However, there are times when you might come across an alien walking off, say, on his way to the john, and you follow him in, cap him, and collect a number of items you wouldn't have normally had access to. This is a nice effect and shows how if the foes had been built into the environment - instead of suddenly appearing, most often with an idea already in their little pointy heads of where you are - it could've been an experience much more like playing an immersive cartoon. But these instances are very rare. Add to that the fact that a seemingly unending supply of foes appears whenever you have a crucial series of jumps, and you have a game that's very frustrating at times.

Still, the first few levels of Blasto are pretty enjoyable and fairly addictive. They entail climbing boxes, moving boxes around to climb onto other boxes, making your way through and then on top of rotating patchwork tubes, saving "babes" (who provide extra lives), and of course shooting lots of aliens. The levels are fairly small, so once a switch is flipped, you don't have to hunt around too long to find out what you've opened up. It's after the third level that it all starts to fall apart. The fourth stage, the Uranian Dunes, is a huge environment that serves as a hub for the fifth and sixth levels. It's so large, in fact, that it's hard to tell where you're supposed to go once you've accomplished something, and there are enough enemies around that you'll probably die several times before you figure it out.This is also the point at which crumbling, moving, and geyser-propelled platforms first appear in the game, which are pretty common constructs for 2D platformers, but don't work here at all. A typical maneuver might have you jump to a platform that moves forward and backward from one that will fall apart after a few seconds. This is fine in 2D where everything is clearly lined up, but in Blasto the depth is very hard to judge, so you'll die a lot before your luck kicks in. You also often have to contend with the unforgiving timing of the game and, as mentioned earlier, that seemingly unending supply of enemies. It would appear that this sort of platform-jumping mechanic just doesn't work in 3D games, but games like Pitfall 3D, for example, accomplished it well by clearly lining up where you had to leap to, offering excellent timing, and not including too many instances where you had to carry off advanced jumps while under attack, so obviously it can be done. In short, it's around this time that the game picks up a level of difficulty that precludes entertainment.

Other headaches in the game include the fact that enemies can shoot through obstacles that block your own shots, you can only save one game on the first of the two memory card slots, and that there's no in-game load feature, so if you're doing very badly you have to quit and wait several minutes to load back up again. On the bright side, the graphics can look pretty nice at times, but the frequent pop-up and showing of seams drags the visuals down.

There's a good game here - that can be seen from the first three levels - it's simply hidden under many layers of frustration. With some tweaks to the timing, perspective, graphics, gameplay mechanics, and level design, it's obvious that Blasto could've been everything it was meant to be. It reaches to be entertaining, but really falls short. 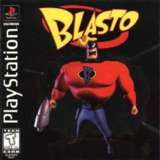