Video game designers never seem very optimistic about the future. Take Blast Chamber: The year is 2096, and you are a genetically engineered human prisoner born and bred for the sole purpose of competing in a battle to the death for the entertainment of the masses. With a time bomb strapped to your back, you are thrown into a rotating cube with three other competitors. It's a desperate battle to add precious seconds to your "kill-clock" by placing crystals into your reactor. The last player standing is the only player who escapes alive.

The play mechanics of Blast Chamber are simple. Each round of the game takes place in one of 60 chambers. A crystal appears in a random location, and you must move your character over the crystal and carry it into the correct reactor in order to add life-saving time to your kill-clock. In a nifty variation, players can rotate the chamber a full 360 degrees by using pressure panels embedded in the walls.

In the single-player mode, Blast Chamber plays like a puzzle game; you face progressively complex chambers in which you must act fast to get the crystal to the reactor before time runs out. The single-player game is more frustrating than fun simply because the chambers quickly become exceedingly difficult to navigate in the allotted time.

At its heart, Blast Chamber strives to be a raucous multiplayer game. Up to four people can compete head-to-head as they try to either add time to their kill-clock or subtract time from their opponents'. Unfortunately, Blast Chamber's gameplay just misses the mark. The control is sloppy and imprecise, and the singular method of attack is a clumsy shove move (which seems to work only half the time). Another issue is the lack of space: There just isn't enough room for four players to spread out in the small chambers. A wide selection of power-ups is available, but you'll have to study the manual to distinguish among them.

Graphically, Blast Chamber offers up mediocre fare, with tiny, hard-to-see human characters. The chambers and ground obstacles are passable, but explosions are rather pixelated. And the long loading times between rounds are hard to excuse given the game's simple graphics. In the end, Blast Chamber relies too heavily on its concept - at the expense of gameplay - and as a result it isn't as much fun as it could have been. 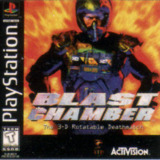 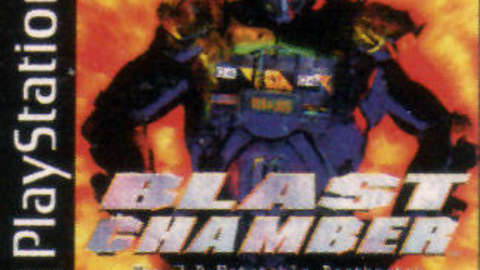 Blast Chamber could have used more time in the oven.