Blades of Time overcomes obstacles of its own creation with the strength of its novel time-twisting abilities.

The fight was going poorly for Ayumi. Down to her last shred of life against a foe three times her size, she had just one chance to come out alive. So she fell back on her old standby: time manipulation. In a red flash, one Ayumi became three, and her once-living foe entered the realm of the dead.

There are situations in Blades of Time when Ayumi's mystical powers come together in such spectacular ways that you can hardly contain your excitement. Figuring out clever ways to lay waste to demons triggers "eureka!" moments, and that feeling resurfaces in a variety of clever puzzles. Blades of Time offers such a novel spin on traditional third-person combat that you might be able to overlook the unresponsive controls and the jarring gun combat for a little while. But no matter how enthralled you become, it won't take long for the harsh light of reality to illuminate the many pitfalls. Blades of Time is a great concept in an uneven package.

Like all women who don skimpy clothes and know a stunning array of martial arts techniques, Ayumi is a treasure hunter. Her multidimensional tale contains so many opposing factions that keeping everything straight is as difficult as the slaying formidable foes who try to kill you, and her annoying narration only further distances you from her plight. When the perfunctory ending sequence plays out in less than a minute, you wonder why you should even care about the outcome at all.

Although the story in Blades of Time is a poorly constructed mess, the events you partake in are anything but. Maneuverability is the binding force that makes chopping down foes a satisfying endeavor. Ayumi glides across the ground like an angel with a bad attitude, and a breezy dash lets you dive into and out of battle in a pinch. Attacks are limited to two buttons, which means you don't have much variety in your moves, and there is a noticeable lack of weight in your mighty attacks. However, such limitations are not a detriment. Positioning is imperative and health is in short supply, so rushing in to unleash a mini-combo and then sprinting back out is a sure survival tactic. Button prompts appear over weakened foes so you can deliver devastating finishers, and these elements combine into fast-moving, empowering situations.

But that's just scratching the surface. Tap a button to rewind time, and you see the fight play out in reverse before your eyes. You regain control of Ayumi when you stop this process, and you now have a partner at your side. A clone reenacts whatever moves you recently performed. Using this power, you can hack away at a foe, rewind the clock, and then hack away at the same foe simultaneously. Abusing this ability is not advisable. When you go back in the past, reality conforms to how it was in that earlier state. If you already took down an enemy's life bar, you undo that damage when you rewind the clock. This balances your power to some extent. Inadvertently healing a boss can cause fights to drag on endlessly, so you have to make smart use of your powers if you want to excel.

Situations surface that force you to use this power intelligently. A creature may wield a giant shield that prevents you from attacking its soft back tissue. If you unleash a deadly sword-swinging show on that shield and then spin back time, you can open him up to damage. Distract him with your clone while circling behind, and you can slash away at his weak point without retribution. Outmaneuvering these hellacious beasts makes you smile with sadistic glee.

Exploitations temper some of that enthusiasm. There are fights in which you can cheese your way to victory by doubling your attacks until an enemy lamely falls at your feet. This is especially noticeable during sequences where long-distance foes can be taken out with your gun. By firing into the crowd, rewinding, and then firing some more, you can mow down meanies before they can come close to you. Although there is joy in hearing the echoing rush of two guns firing in symphony, such a victory is hollow. You feel like you're taking advantage of the system rather than making the most of it. This scenario is made worse by the lousy gun controls. Blades of Time's emphasis is on flashy movement, but your momentum is squashed when you whip out a firearm. Ayumi stands stoically still while letting loose a bullet barrage. By forcing her to be grounded, the game ensures you can't abuse your guns in every fight. But there are times when you need to rely on long-distance attacks, and whipping out your rifle feels emasculating.

A bigger problem lies with the controls. At odd moments, when you push a button nothing happens onscreen. You try to dash out of the way or initiate a finisher, and Ayumi stands stock-still while a baddie pummels her to a pulp. Such a problem is maddening in the best of times, but when your health is low, this unresponsiveness rises to the next level of frustration. Ayumi carries up to three health packs at a time, and you need them because her health bar can be drained with just a couple of hits. Ideally, you refill your health and reestablish your dominance. But such an option isn't always possible. You might be caught in an animation that precludes you from healing, and having your precious life leak away because the game won't let you have a bite of that tasty health is a horrible way to die. To make matters worse, you might slam on the button multiple times to ensure you're healed, only to watch in horror as two of your reserves are used up in your frantic taps.

The unresponsiveness carries over to every move in your arsenal. It's not something that happens frequently, but it happens often enough to be the cause of many deaths. Whether the buttons work or not, magic is difficult to pull off. At various points in the game, Ayumi finds an altar that grants her special powers. Conjuring fire, throwing ice, creating earthquakes, and summoning other elemental attacks enliven the combat. But the more powerful spells require you to hold one button and then tap another, and these have a noticeable delay. It takes away some of the thrill of filling the screen with fire when your health is sapped because you were stationary for so long. Still, once you figure out how to use magic, it does add another dose of excitement to your hacking and slashing. You build your magic meter by attacking, so you enter a smooth rhythm of slicing baddies, shooting magic, and then repeating, until all fall at your feet.

Frequent spikes in difficulty occur mainly because of the unreliable controls. Many of the harder battles enter the land of frustration because you can't heal in time or you fail to initiate a finishing blow when you most need to. In practice, the controls fail only a small percentage of the time, but that doesn't diminish how problematic this is. For the most part, the high challenge level is a welcome aspect of Blades of Time. Once you learn the basics of how to use your time-manipulation ability, the game unleashes swarms of foes with varying strengths and weaknesses to force you to take a creative approach to combat. You may stave off an advancing horde with your gun, rewind time, and then take out air attackers while your clone continues to fire into the crowd. Or you can summon a clone to serve as a distraction while you unleash waves of magical death from a distance. The tools to complete the most difficult sections are always in your grasp; it's just a matter of deciphering the best method of conquest and executing your plan with precision.

Challenges also arise during more contemplative sections. Time bending is ripe for intriguing puzzles, and there are enough brain teasers in Blades of Time to keep you invested outside of the demon slaying. The best of these appear in a desert-themed level. Sun is your biggest enemy when direct contact with light burns your delicate skin, so manipulating shade is paramount to your survival. Coordinating clones to step on switches while you dash through the newly formed darkness injects Ayumi's graceful movement into even the more thoughtful moments. Later puzzles fall short of the mark. Creating a ball of energy to light nodes is tedious at best, though these puzzles are easy enough to not distract you from the combat for long.

Even during its low point, Blades of Time presents nicely detailed environments to tear through. Technical issues (disjointed animations, inconsistent framerate, blinding particle effects) are initially off-putting, but what the game lacks in polygon-pushing prowess, it makes up for in sheer variety. Sky gardens is the most captivating section. Flowered bulbs rise high into the wide-open sky while waterfalls empty into shallow pools, and the fantastic wonder this scene creates is a pleasing contrast to the somber winter scenes in a later level. There are enough unique environments to keep your eyes pleased as you peer at the various tapestries. Considering that Blades of Time retails at a budget price ($40), the fact that it sports so many differing locales is a welcome surprise.

Another unexpected addition: multiplayer. Both competitive and cooperative modes are available, but neither is engaging. Your time power has been stripped away here, leaving you with a smooth though bare-bones combat system that quickly grows old. But you have to take the bad with the good in Blades of Time. The promise of its inventive time mechanics is occasionally realized. However, you do have to put up with so many down moments that your dedication may intermittently waver as you push through to the end. Novelty comes at a price. Blades of Time's uneven construction struggles to maintain its high potential, but it's sheer uniqueness makes it well worth spending time with. 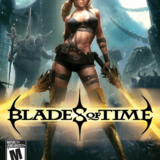