BlackSite: Area 51 is an ordinary first-person shooter that's held back by a collection of bugs and other issues.

The name "Area 51" immediately evokes a number of things relating to the US government, ranging from secret aircraft test programs to more colorful conspiracies, such as aliens and space ships. In the world of gaming, Midway has used Area 51 in a series of pretty hokey alien-filled games, ranging from light gun shooters that started in arcades to cheesy first-person shooters filled with all kinds of weird conspiracy theories. BlackSite: Area 51 continues the lineage in a more serious manner, but it doesn't necessarily make for a better game overall. The game's strong graphical presentation is overshadowed by its run-of-the-mill gameplay, which is in turn overshadowed by a series of glitches.

The game puts you in the role of Aeran Pierce, leader of Echo Squad. You'll roll with the same set of squadmates throughout, and the backstory is filled in with their chatter between firefights. The game opens in the recent past, with Pierce and his team deep in Iraq, looking for weapons of mass destruction. Instead, you find some not-quite-human enemies that are quickly explained away as humans with extreme cases of encephalitis. Then, you encounter swarms of creatures that explode like land mines when you shoot them. After a brief Iraq portion that sets the stage for what's to come, the rest of the game takes place in Nevada where you're told that a militia has risen up and seized control of Rachael. This is the town near Groom Lake and Area 51 itself, as well as its surrounding areas. While it's painted as Americans who have risen up in protest of the government, that's only half the truth. As you get deeper into the invasion, you'll uncover what's really going on, though the game fumbles when it comes to explanations and never really tells you from where the alien creatures originally came. The level titles and a few references to modern-day sticking points, such as Abu Ghraib, attempt to give the game a bit of an edge, but the content doesn't back up that edge very much, making level titles like "Mission Accomplished" (complete with sneer quotes) feel forced.

The action in BlackSite's single-player game is very straightforward. You'll control a squad, but your control only uses one button. If you hit the squad button, you can order your team to move to specific positions. You can focus fire on enemies by hitting the button while pointing at an enemy. You can also use it to order squadmates to utilize mounted gun positions, but you'll mainly use it to get your squadmates to open doors. Apparently Pierce is too good to open doors by himself. The squad mechanic feels slapdash and rarely necessary during the course of combat. Focusing fire on enemies doesn't work as well as pulling the trigger yourself; thus, it just seems faster and easier to do most of the shooting yourself. There are a couple of extended vehicle sequences where you'll drive a Humvee from one location to another while one of your squadmates lays down fire from a mounted gun to take out several giant worms that keep sprouting out of the ground. The vehicles handle just fine.

You'll get your hands on a few prototype weapons, such as a scattergun that fires rounds that can bounce off walls or a beam cannon that delivers large bolts of energy. But most of the time, you'll be using a standard-issue assault rifle. The aiming assists that make your reticle stick to enemies a bit make your reticle stick to enemies a bit, making firing on target a little too easy, even if you don't hold the weapons up and properly aim. Most of the enemies you face are humanoids, though you'll also face off against a handful of more creative creatures, such as the fire brute, which is a huge four-legged boss creature with a bright, glowing weak spot on its back that you have to take down with homing antitank weaponry. The game could have used more enemy diversity.

For the most part, BlackSite is just kind of uneventful. But it's taken down a notch by a light scattering of bugs and other issues. In the Xbox 360 version, we ran into a spot where the vehicle we were driving, as well as other broken vehicles in the vicinity, suddenly dropped a bunch of weight then started slowly floating and twisting in the air. For a second, it looked like it was going to be some cool alien effect. After a minute or so, the floating cars were joined by a bunch of messed-up on-screen textures and effects, which made it clear that something was broken. Most of the other issues involve the squad artificial intelligence. Your guys occasionally lose focus and run all over the place or say the wrong things at the wrong times. In one case, they'll claim to be heading your way only to start running in the opposite direction. While no one issue is bad enough to bring the whole game down, they all add up to a game that would have probably done a bit better after another month or two in development.

The campaign would have been more exciting with a cooperative option, but it's of average length and feels passable. It's also joined by a multiplayer mode that feels half-finished. It only allows 10 players to get together and play in a few basic game modes, but you'll need luck actually finding a 10-player game. We felt lucky when we managed to find three other players playing on the Xbox 360 and have seen exactly one person trying to play online in the PC version. The matches we did get into made the modes feel like they were sort of slapped together in a passionless manner in order to place one more bullet point on the back of the box. None of it seems to compensate for average ping times very well either, resulting in sketchy weapon firing and player movement. Even when working as intended, it's certainly not going to be your first choice for multiplayer shooter thrills on either platform.

BlackSite uses the Unreal Engine and, generally speaking, it looks pretty nice. The character models look good and the environments look sharp. The PC version wins out over the 360 version in this aspect, provided you're running on a system that exceeds the minimum requirements. The Xbox 360 version has a really unstable frame rate, occasionally hitching up completely and halting for a second or two before things get going again. That wasn't a problem on the PC version, though on the PC, we noticed more tearing than usual. Also, for a game that delivers a lot of its dialogue on the battlefield, it's a bummer that your troops don't move their mouths much when speaking. The voice acting in the game is decent, with the main bad guy coming across as genuinely angry and crazy thanks to some solid delivery. BlackSite also has decent music and sound effects, with properly impactful explosions and weapons fire.

For the most part, BlackSite is a boilerplate first-person shooter that has a handful of good moments. As it stands, the game suffers from some annoying issues that make it difficult to recommend. If you're a huge fan of first-person shooting, you're probably better of with a rental because the lack of multiplayer competition means that the whole experience doesn't last especially long. 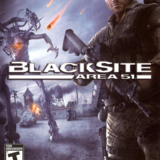 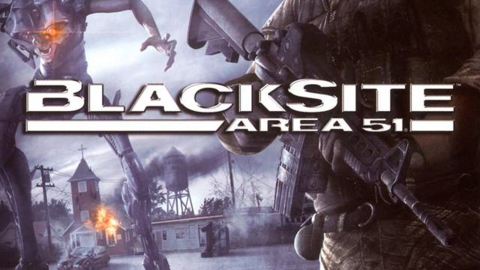 BlackSite: Area 51 is a first-person shooter with squad tactics that takes you deep into a secret government facility.