Blacklight: Tango Down is a good, cheap multiplayer shooter for the budget-minded gamer looking for a change of pace.

Cheap and nasty aren't two words generally used to extol the virtues of anything outside of a red-light district, but they accurately describe the very good Blacklight: Tango Down. Zombie Studios has done a tremendous job with this multiplayer first-person shooter for Xbox Live Arcade, delivering a remarkably feature-filled game for just 1,200 points. While there are some rough spots here, like the worthless single-player/co-op mode and a few grievances over map design, you get a lot of action for just $15. All of the console shooter basics are covered here, and the design also incorporates a few twists so that it doesn't feel like you're playing a bargain-basement Call of Duty.

Of course, Blacklight: Tango Down is pretty much that. The game is console-shooter boilerplate, with quasi-realistic, brutal, and fast-paced action where you can get taken down with just a splattering of shots or a single well-placed bullet to the head. The story is set in a near-future Russia, which has gone all grim and dystopian. City streets have become battlegrounds in a war between Blacklight, a team of elite US commandos, and The Order, a team of US commandos gone rogue who might be turning people into some kind of zombies. Apparently. The plot is completely ignored in the game itself, so you have to read the how-to-play text if you're really curious to know why these gangs of high-tech soldiers in sci-fi suits are shooting each other. Controls are standard for the genre, and you get gadgets like kaboom grenades and special digital pineapples that cause a cloud of pixelated distortion in your suit's funky goggles. You can also activate the hyper-reality visor, a limited-time x-ray-specs deal that lets you spot enemies through walls via their heat signatures and locate health and weapons caches.

Along with the lack of a plot is the lack of a solo mode of play. Single-player and co-op available via the Black Ops option is a waste of time. Taking on four maps full of bad guys either alone or with up to three buddies sounds cool, but the reality is a lot less interesting. Maps are thoroughly linear. You trudge forward, kill the bad guys until they stop spawning, and occasionally open a barrier by playing lame minigames, including a variant on Simon. Firefights can be very tense because just a couple of shots can kill you, and the game ends immediately as soon as you die (there is no save option, even when playing solo). But predictability soon wins out because enemy soldiers do little aside from find cover and hunker down, only peeking out regularly to open fire. Levels quickly turn into creepfests because you have to keep your head down and slink forward until you find a good firing position of your own. Battles are somewhat reminiscent of the gunfights from the Police Squad TV show, where Frank Drebin and the villain of the week would exchange shots from a few feet apart while hiding behind garbage cans.

So adversarial multiplayer is the main focus. You get a full-featured multiplayer shooter here, too, with seven modes of play. These modes aren't exactly revolutionary, dealing with tried-and-true game types like Deathmatch, Team Deathmatch, Last Man Standing, Last Team Standing, Domination, and the usual variations on Capture the Flag (here called Retrieval) and Search and Destroy (here called Detonation). Still, they are more than capable versions of familiar favorites, spiced up a little by varied weapon kits that let you play a number of different roles, from sniping specialist to gung-ho assault-rifle guy. You also get to use gadgets like your visor and the digital grenade, which is a fantastic little helper when you need instant cover to get out of harm's way. A lot of people are playing right now as well, so you can step right into a match at just about any time of the day or night. Player ranks are visible on the opening match screen, so you can tell if you're getting into a game with suitable opposition. This is vital because there is a wide discrepancy between players. Experience gained in matches is used to level up, which unlocks upgrades to weapon and equipment loadouts with various stocks, barrels, and other add-ons. This makes a huge difference in how games play because seriously leveled-up players have access to tricked-out weapons that can turn out your lights with a single squeeze of the trigger. It's frustrating when you're on the other end of a blast like this, but at the same time, getting gunned into dog food serves as a tantalizing lure to keep you playing so you can eventually earn a torso shredder of your very own.

Map design is quite good. Tons of cover is spread around in the form of things like concrete barriers, dumpsters, alcoves, and random wreckage, which makes every map a tactical challenge where you need to think about your moves. At the same time, maps aren't rat warrens of hidey-holes that campers love to use to spoil everybody's fun. Everything also makes sense. Maps are fairly tight and sensibly constructed, so you can't really get lost or even go for more than a few moments without encountering somebody who wants to kill you. A couple of maps lean a little too heavily on narrow alleys that are too cramped to afford much in the way of free-roaming play, although most have a good blend of corridors and open spaces. About the only serious annoyance comes from fixed spawn points that can be besieged in team games, which occasionally turns matches into assembly-line carnage where you take turns lining up to shoot opponents as they emerge from their HQs. The hyper-reality visor helps somewhat with this by letting you spot spawn campers, but there are often too many enemies waiting for you. Knowing the location of the gun barrels doesn't help in these situations as much as simply being quick and very accurate with your shooting.

Map visuals are a grim and atmospheric take on future city streets that have been turned into shot-up battlefields. Burning cars are strewn all over the pavement, and buildings typically look like something out of a documentary about Berlin at the end of WWII, giving you a great impression of being stuck in the middle of a war zone. The setting is a bit too bleak at times, especially with the addition of a grungy techno score that you might think you've heard in a thousand previous end-of-the-world games, but it mostly works at setting a mood. Another interesting angle frequently reminds you that your commando is viewing the gameworld through a computerized visor, via neat touches like digital artifacting when digital grenades go off. It sort of provides a game-within-a-game effect. Ads are probably the biggest buzz killer, as billboards for ATI, Alienware, and the developer dot the landscape. They're not always in the frame, although this relative rarity just seems to make them all the more jarring when they do appear. It's off-putting to turn a corner in a blasted-out urban hell and walk right into an ad telling you that you'd be better off playing the game on an Alienware PC.

For multiplayer shooting on a budget, you can't go wrong with Blacklight: Tango Down. You easily get more than your $15 worth here, and the gameplay offers a change of pace for those who are getting a little burned out on the multiplayer in full-price games like Call of Duty: Modern Warfare 2. A handful of tweaks would be welcome, particularly when it comes to map spawn points and the disappointing solo/co-op mode of play, but you really can't nitpick considering how much you're getting for a very reasonable price. 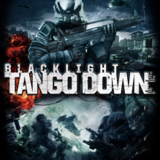