Black Stone: Magic and Steel is like a botched cloning experiment from a B movie, with developer Xpec Entertainment playing the mad scientist's role and Gauntlet playing the test subject. The beast that's emerged from the cloning chamber is just what you'd expect: a shambling, ugly, and dumb version of the source material. Black Stone shamelessly wants to be Gauntlet, but it somehow fails to accurately copy that franchise's simple gameplay and controls, while simultaneously underperforming in all other areas.

Black Stone was originally released under the title Ex-Chaser a little over a year ago, as a launch title for the Xbox in Japan. Part of a long-running series that started with the PlayStation game Spectral Force, it's the first title in the series to be brought to the West. While other games in the series have been RPG-strategy hybrids, Black Stone is a departure into the action genre. The game drops you into the middle of a story arc, but the plot is rife with impenetrable and unnecessary details. Suffice it to say that the kingdom of Zedan will be much better off if you collect all the black stones and kill all the monsters.

One to four players (no Xbox Live support is provided) undertake the task by playing as characters from one of five classes: warrior, thief, warlock, archer, or pirate. Just like in Gauntlet, you run around multiple levels, attacking monsters and destroying the monster generators that produce them. Smashable barrels are scattered throughout the level, and they contain power-ups, gold to buy power-ups between levels, one-shot magic items, food to replenish health, or keys to open chests that contain more of the same. Sometimes a chest or barrel will contain bad things, like spoiled food that decreases health, an insect that will follow you around and drain your health, or a curse that will change your head into a pig's head and render you unable to attack. Sound familiar?

While it's bad enough that the high-level design is nearly identical to Gauntlet's, Black Stone's implementation is overly generic and slow-paced in comparison. Any given level contains only three or four different monsters, and even then, just two of those will make up the bulk of what you face. Furthermore, each class plays nearly the same, with very minor differences. Run speeds vary from abysmally slow to rather slow, and ranged attacks pierce through enemies, ricochet off them, or fire a bit more quickly. Melee attacks seem to have no differences at all between classes. Firing off magic looks the same for all classes. The only attacks that are truly differentiated between classes are each character's special attack, which you can only pull off when you've filled your power gauge, and each character's "bump" attack, which is an initial attack performed when you run (or rather, when you move almost imperceptibly faster while switching to a jogging animation) at a monster.

Apart from often being the slowest-moving thing on the screen, there are also some incredibly bad control issues. Chief among them is an auto-aiming system for ranged attacks that has a predilection for aiming at things off to the side of and further away than the monster you're currently facing. It also can't aim down a flight of stairs that you're currently on. For some classes, it can even cause a special attack to miss. Needlessly, instead of a single, situation-dependent attack button, there are separate buttons for ranged and melee attacks. Button mashing is also not tolerated, as you cannot adjust your direction while attacking, and pushing an attack button while you're already attacking will cause you to attack again in the same direction. The end result is that in an already sluggish game, combat is a push-wait-wait-push affair. Combined with monsters that can knock you down, stun you, or freeze you, there are stretches where you'll spend less time controlling the game than watching it.

As is to be expected in a game with such major flaws, there are plenty of little ones as well. Some levels will pull you out as soon as you complete the level's objectives, even if you're not ready to leave yet, while others provide a teleport pad. The manual offers no information on how the different classes play, shows a different screen for the power-up store than is actually in the game, and includes this as the command for "Bump Attack 2": "Left Thumbstick:backward?forward + A button" [sic]. The manual is ultimately better suited as entertainment for fans of badly translated English and a reference list for commands, but the game is simple enough to figure out without help. The interface is also inelegant. An information window at the bottom of the screen provides your character's information, but you have to push the black button to page through four different screens of info. Some information that you'd like to have together is on separate pages, like your current health and the number of shots of magic you have left, and one of the pages really doesn't serve any useful purpose at all while you're in a level, because the information (your character's strength, defense, and intelligence stats) might change once or twice during the level. Finally, the game's anime cover art doesn't represent the game's actual art design at all, which aims for a realistic look, and the screenshots on the back are too small to show this.

Once you do see Black Stone in action, though, you'll see that the game's graphics are just as far south of mediocre as its other aspects. There's the aforementioned lack of different monsters, as well as the running animation, which makes the characters look like they're running on an ice rink. The ground consists of surprisingly low-resolution textures, and there are lots of visible seams. The monster design, character design, and spell effects are all lackluster. Everything's working as intended--the game just looks and plays really poorly.

Ultimately, there's nothing about Black Stone: Magic and Steel that makes it good enough to recommend, even to someone whose favorite games are from the Gauntlet series. The game is extremely unoriginal in concept and poorly executed, and it's hard to understand why it ever crossed the ocean. 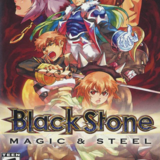 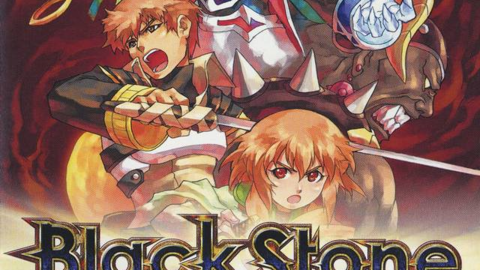