Simplicity, complexity, and difficulty work in harmony in this marvelously scored entry in the Bit.Trip series.

It's a rare franchise that can reinvent itself with every new game yet still remain true to itself. Despite offering very different gameplay experiences, the Bit.Trip games all feature an engaging mix of infectious chiptune music, attractive retro-styled visuals, and simple mechanics that build smoothly to create a hefty challenge. The fourth game in the series, Bit.Trip Runner, continues on this course, taking the series into the realm of platforming. As the enigmatic humanoid CommanderVideo sprints unflaggingly toward the finish of each stage, it's up to you to make him dodge obstacles using a limited repertoire of moves. Simple jumps and slides slowly compound into strenuous feats of timing and precision, and though the most challenging levels make you feel like you're hitting your head against a wall, they never feel insurmountable. The excellent music entertains throughout your triumphs and failures alike, making it all too easy to give each level one more try. Bit.Trip Runner is not only the lengthiest game in the series, but also the best.

As with every Bit.Trip game, things start out simply. In the first stage, you learn to jump over things and become acquainted with the fact that you are continually moving fowards at all times. A few stages later, you learn to slide under other things. After you learn to kick (destroy things) and spring (launch off a specific thing), you have learned the moves you will use for the majority of the game. You perform these actions with button presses while holding the remote sideways, and CommanderVideo responds with alacrity. As you progress, you begin to discover the subtleties of each move. For example, you can add a little extra distance to your jumps by holding the button down. Slides can be maintained indefinitely, but kicks only last a moment. By the time you get into the later stages, you need to master the variable jump length and become proficient at quickly popping between slides, jumps, and kicks if you hope to succeed.

In addition to pits, projectiles, and other unfriendly objects, each stage features two types of strategically placed items for you to pick up. The first--gold bars--count toward your point total. If you grab them all, you get access to a special bonus stage in which you try to grab a lot more gold bars to boost your score even higher. Though CommanderVideo has the same abilities in these stages, there is no music and the background looks like something out of the original Pitfall. While there are still no online leaderboards, players have a welcome concrete goal to strive for because each level has a perfect score. The second type of item is a red plus sign that kicks the music up a notch. Players who have experience with the Bit.Trip series will recognize the familiar progression (hyper, mega, super, ultra, extra) that layers new musical complexity onto the soundtrack and causes CommanderVideo to leave an increasingly flashy trail behind him.

The clever placement of these items not only makes each level unique, it smoothes out the difficulty curve by challenging you to strive for precision a few stages before it is actually required. Early on, items are often used as cues, showing you where you need to jump to avoid obstacles. Before long, however, they start to shift and begin challenging you to cut jumps closer than necessary. You can pass the stage without collecting every single item, but it's hard to resist striving for that perfect score. This ends up being a helpful impulse because soon enough, you are forced to cut your maneuvers extremely close just to make it to the finish. There are some very difficult sections in the lengthier later stages, and they present a serious challenge that may be too daunting for some. Yet though the timing is demanding, you never feel like success is unattainable because you have already achieved a high level of precision en route to your current stage, albeit in smaller doses. On top of that, nothing ever changes within a given level, so you can gradually increase your chances by learning the layout and timing patterns. Furthermore, hitting an obstacle merely sends you back to the start of the level, ready to begin another run almost instantly. Bit.Trip Runner pushes you to the limits of your dexterity, but it does so in such a deft way that repeatedly failing a level doesn't actually feel like failure.

Of course, it wouldn't be a Bit.Trip game if the chiptune music wasn't enhancing the action every step of the way. The game features three levels (12 stages per level) and each has a distinct audio persona. Every stage begins with a minimal soundtrack, perhaps some low tones and a simple beat. As you pick up the aforementioned red plus signs, a whole new layer of sound enriches the track. Meanwhile, every item you pick up and obstacle you avoid chimes an individual note. The spacing of the obstacles is such that these chimes fit seamlessly into the music. The stroke of genius here is that these tones are dependent on the musical track, not on your position in the level. The baseline track is always playing, even when you hit an obstacle and are sent back to the beginning of the level. This means the chimes that sounded for the first few jumps on your previous run will not be repeated on your current run, creating the sense that you are part of an ever-renewing soundtrack even though you are doing the same thing over and over. This clever auditory trick creates a sense of continuity and novelty that smoothes over your stumbles and keeps things feeling fresh even on your 15th try.

Bit.Trip Runner's visual aesthetic echoes that of its predecessors, though the nature of platforming means that it features a less abstract and more concrete look. There is still some strange stuff to see and the occasional distraction to trip you up, including a bit of graffiti that reimagines CommanderVideo as a cat. With 33 regular stages, 33 bonus stages, and three boss fights, Bit.Trip Runner is definitely the lengthiest game in the series thus far. It presents a platforming challenge that is old school in its simplicity while boasting stylish visuals and a supremely clever and engrossing implementation of music. The difficulty gets very steep toward the end of the game, and promises of "just one more" can easily drag on until your whole world appears to be scrolling sideways. Still, Bit.Trip Runner is engaging, challenging, and a whole lot of fun, which makes it one of the best games available on WiiWare. 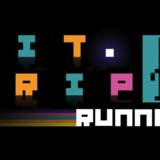