Not even the allure of shiny robots with guns for arms can liven up this mind-numbingly simplistic and repetitive over-the-shoulder shooter.

In a perfect world, everyone everywhere will pay due homage to the supremacy of maniacal, gun-toting robots. Unfortunately, this world is not perfect. Bionicle Heroes, Traveller's Tales' latest game featuring the Lego license, does not do justice to its premise. In fact, Traveller's Tales seems to have given Bionicle Heroes no thought at all. The game's core mechanics closely mimic, if not straight up replicate, those found in the company's recent Lego Star Wars hits. Less-than-innovative mechanics not withstanding, the mind-numbingly simplistic and repetitive gameplay, as well as a dearth of worthwhile added content, means you'll have experienced everything this game has to offer by the end of the first stage.

Playing out over the course of several books, comics, and movies, the Bionicle Lego story enjoys an ever-growing library of source material. And if you're familiar with the lore, you'll know that Bionicle Heroes mostly follows the Bionicle Legends story arc. However, if the Bionicle name is new to you, you'll have the stage set by a brief narration at the beginning of the game. And that's about it. Because the only other "voice talent" you'll hear throughout the rest of the game is a few grunts from the menacing yet simple-minded enemy Piraka in cutscenes, you'll be left to infer what exactly is going on. So here's the gist. You arrive on the island of Voya Nui in an elongated tube, where some weird little robot kid hooks you up with these masks that give you elemental powers. From there, you'll need to enter six element-themed zones--forest, ice, fire, and so on--defeat the six evil Piraka, and recover the Mask of Light. There's also some kind of parasitic golden banana peel thrown into the mix, most likely for good measure.

How you interact with Bionicle Heroes is nearly identical to Traveller's Tales' other Lego series, Lego Star Wars. You'll run around a linear environment, exploding Lego pieces and enemies into a burst of smaller Lego pieces of varying point totals. These totals range from 10 to 250, which you'll then be able to spend on upgrades and unlockables in the cantina, err, Matoran Enclave. You'll find even more of these Lego pieces with the help of each character's individual elemental power, which looks exactly like the Force and behaves similarly to constructing in LSW. Along the way, you'll also collect gold and silver Toa canisters, with some being inaccessible until you go back through the level after you've upgraded your robot. By finding enough of these canisters, as well as passing zones and bashing bosses, you'll be able to visit a trophy room, where you can read up on gaps in the story. But by the time you've aggregated enough tidbits of information for the story to become semicoherent, you'll probably be past caring and will wish that you'd just read the books.

Aside from the plot holes, the major problem with Bionicle Heroes is its dull, repetitive gameplay. Heroes is so dull precisely because of the game's core feature. Hero mode activates once you've picked up a certain number of Lego pieces. When in hero mode, you are completely invincible to all damage, and this invulnerability lasts until you activate a giant golden statue to access the next area of any given level. By being even remotely selective with how you pick up Lego pieces, you'll be invincible a good two-thirds to three-fourths of the game, which means that nearly every situation before a boss battle is utterly trivialized. And on the off chance that you do die, you'll simply lose your currently equipped mask and receive a full bar of health. Replacement masks can be found around every corner, but because they're rarely needed and picking one up switches you to that character, they're more of an escalating annoyance than a life-saving necessity. Also, boss fights are unbearably predictable. You'll face a boss after the first, third, and fourth stages of each zone. In these fights, you'll invariably kill a bunch of minions to max out your hero meter; activate a conveniently located golden statue to do damage to the invincible boss; rinse-wash-repeat until the boss is down to a few hearts of health; then, while the boss is only mostly invincible, circle-strafe and shoot until it keels over. The one exception to this is in a stage where you face off against a boss and hordes of enemies...while you're in hero mode. Imagine, if you will, the consequences of an invincible being and a mostly invincible being coming to blows. It's not as exciting as you might think. If you add in combat that entails simply holding down the strafe and shooting buttons, as well as a shoot-it-until-it's-dead ethos and a brain-dead autotargeting system, you've got a truly mind-numbing, unsatisfying experience.

Much like Lego Star Wars, Bionicle Heroes has a quirky sense of humor that occasionally shines through the drudgery. You'll get a glimpse of this in the cutscenes, but most of it will come by way of the unlockable content found in the Piraka Playground. Here you'll find all of the Piraka that have been defeated in the stages, and now that they're no longer harassing the fine folk off Voya Nui island, they're free to build sand castles and engage in other tomfoolery. These scenes are pretty funny the first time or so, but they're rather short and don't hold any lasting appeal. You'll also find three bonus stages, which are two-minute missions to see how many of a certain underling robot you can kill. These aren't particularly enjoyable, but they are a nice way to round out a few of the "kill this many" achievements in the Xbox 360 version. Speaking of achievements, getting the full 1,000 achievement points out of Bionicle Heroes will require two full play-throughs, though you can get about 900 in one go. Aside from that, there is no multiplayer co-op or battle mode. A battle mode would have gone a long way in extending the value here, especially because slugging it out against another player with the six different elemental powers could potentially be pretty neat. What's also missing that might have been worthwhile is a build-your-own-Bionicle mode, playing off the Lego theme.

The vast majority of the game's budget was clearly funneled into the visual department; thus, the game does look fairly good. The various environments are well detailed, albeit stereotypical in their elemental themes, and fire and other explosion effects look particularly good. The Bionicles themselves animate well and have a shiny robotic luster, but you won't see any kind of damage modeling or other advanced effects. Effort was made to capitalize on the Xbox 360's technical capabilities, by way of high dynamic range bloom lighting, as well as depth of field and motion blur options. Unfortunately, the bloom lighting is often overdone to the point of being an eyesore. The depth and blurring effects also just muddy up the presentation. Luckily, the latter two can be turned off, which you'll probably want to do. You'll also find these effects in the PC version, but they look much cleaner, so the PC version looks the best. For the most part, the game performs well on all systems, even with numerous enemies and explosions onscreen. The frame rate will occasionally drag during some of the latter boss-fight sequences, though. Unfortunately, the musical score here will have you searching for your own self-destruct button. Because you'll be in hero mode for the vast majority of the game, and hero mode has a track that trumps the music of any stage, you'll be listening to the same Indiana Jones-inspired tune looped ad nauseam. However, many of the other arrangements that you'll occasionally hear aren't exactly a pleasant alternative, such as the cacophony produced by a French horn and electric guitar mash-up. Thankfully, you'll be able to turn these, as well as the sound effects, down or off.

Bionicle Heroes is without a doubt aimed at kids and is as E10+ as a shooter can get, but even a child will quickly grow bored by the lack of challenge, innovation, and story development in this game. The blatant similarities to the Lego Star Wars series are also troubling because they often leave you with the feeling that you're playing a retextured version of those games. Although the game does have bursts of inspiration in the charm of the cutscenes, these are spread entirely too thin and don't come close to carrying the package or making up for the disappointing gameplay. Those who enjoy the Bionicle storyline will most likely have an easier time looking past this game's flaws, but if you're looking for a fun and engaging game, definitely pass on this one. 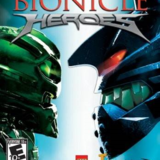 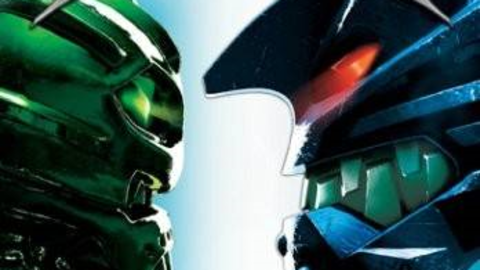