Bionic Commando has some enjoyable moments, but consistent fun always seems just out of arm's reach.

Bionic Commando is a third-person action game that likes to tease you. It dangles endless possibilities in front of you, only to snatch them away and replace them with limp gunplay and extended stretches of nothing. There are some good ideas here, and when they coalesce, you glimpse the great game struggling to escape from the shackles of averageness. You see it when you fling automobiles at a crowd of troopers; you see it in the exciting, high-flying concluding sequence. More often, however, you get the idea that developer GRIN didn't know what to do with its clever ideas. Early glimpses of a big world to explore tantalize you, but your progress is restricted by annoying clouds of deadly radiation. You'll come across new, more powerful weapons, only to discover that shooting them is just as lame as firing your default pistol. Moving about the world with your bionic arm is fun, but even that mechanical wonder isn't strong enough to carry the entire experience.

That bionic arm is the gameplay's backbone, and it's the source of every positive feature found within Bionic Commando. Most importantly, it's your standard form of transportation. Using it as a grapple hook, you can fling it onto posts, tree branches, and girders and swing and climb toward your destination. Stringing swings together can be satisfying, though you don't have Spider-Man-like freedom to glide about as you please. Your arm has only limited reach, so you can latch onto something only when the targeting reticle indicates that the surface is available. Furthermore, swinging has a lot of weight behind it. You must release your grip earlier than you would expect to keep the momentum going, which leads to a bit of clumsiness in the first hour or so as you become acclimated to the mechanics. Eventually, you'll be able to swing with ease, though certain levels (city-based environments, a tree-laden park) are more enjoyable to navigate than others (rocky caverns, underground passages) because they offer a bit more elbow room.

A glimpse of a futuristic metropolis may at first lead you to believe that there's a lot of room to explore. However, while Bionic Commando does afford you occasional, minimal leeway, you're generally pushed down a linear path. In this case, the modern replacement for traditional invisible walls (though there are some of these as well) is radiation. These blue clouds of instant death choke the city streets and coat the sides of buildings and are to be avoided at all costs. Radiation is one of the game's most common sources of frustration, because it imposes an artificial limitation on movement. You might fling yourself onto a seemingly safe rooftop only to be welcomed by this fatal mist, or reach out toward a wall but find that radiation keeps you from grabbing it. The restrictions have a big impact on the pace, and the scattered enemy encounters are far too tepid to energize the experience.

These encounters are lifeless mainly because it isn't any fun to shoot Bionic Commando's lousy weapons. Pistols are often referred to as peashooters, but no other game in recent memory provides a firearm that lives up to this name so aptly. It gets the job done, but the hollow pop of each shot and the minimal visual feedback make it boring to use. Subsequent additions to your arsenal aren't much better. From an unexciting grenade launcher to a boring shotgun, every weapon lacks punch. The only exception may be the rocket launcher, which allows you to fire off multiple rockets at once, a handy feature when facing a heavy-duty aircraft. Most of the time, however, you'll be facing sporadic squads of armored grunts. They don't exhibit the most advanced intelligence, but firefights can still result in your quick death, since you can take only a few shots before needing to duck away and let your health replenish. The low point of this mediocrity is a protracted, unrewarding shooting sequence within a library that will make you long for more energetic weapons and tighter shooting mechanics.

Fortunately, you have other offensive tools that are far more interesting to use. You can latch onto foes with your arm and zip-kick them, which sends you leaping backward through the air, letting you finish off your target with your pistol or perhaps another kick for good measure. You can also grapple certain environmental objects, like cars, boulders, and barrels, and fling them at your enemies--a technique that is especially enjoyable against a towering mechanical worm that stars in Bionic Commando's best boss fight. Additionally, you can launch the same objects in the air and punch them into opponents, which is equally fun to do. There are also a few set-piece levels that put the bionic arm to good use. In one of them, you take down a series of aircraft as you leap from one to the next; in the game's final scenes, you use similar techniques to memorable effect.

It's a shame there aren't more of these moments, but the levels aren't constructed very well, once again hinting at possibilities never brought to fruition. You'll traverse passageways littered with usable objects, yet nary an enemy to fling them at. In other levels, you'll face multiple minibosses at once, yet there will be a scant few loose rocks to heave at them. In fact, there are sizable stretches during which absolutely nothing happens, presumably because swinging and grappling are supposed to be engaging enough on their own. Granted, moving about the world is enjoyable, but it isn't speedy enough to be exhilarating, and aside from a few simple sequences when you swing along a series of floating mines or avoid water (that heavy arm makes you sink like a stone), moving from point A to point B is a straightforward process. A bit of environmental puzzle solving, or looser swinging mechanics and more expansive environments, could have made it far more joyous to navigate this lonely world.

So who is this guy with the bionic arm, anyway? Well, he's Nathan Spencer, a falsely imprisoned death row inmate and one of the last remnants of a military program responsible for an entire caste of commandos. After a terrorist attack in Ascension City lays waste to the metro area, the military reunites Nathan with his arm and and orders him to investigate. The narrative makes little sense and is sleepily doled out in mission briefings from Joe Gibson (the Super Joe of previous Bionic Commando games) and within text tidbits discovered by hacking data terminals. Nathan himself is the story's biggest stumbling block, however. The gigantic chip on his shoulder and sneering voice acting make it impossible to identify with him, which in turn makes it incredibly tough to care about musings regarding his missing wife. Yet while you won't come away from Bionic Commando knowing much about Nathan and his world, you will know what soft drinks these people guzzle and what video cards they use, given that Pepsi machines and Nvidia billboards are so common. Even if you find yourself getting invested in the story, which is unlikely, there's nothing like some conspicuous product placement to yank you back to real life.

Thankfully, the careful rendering of branded vending machines isn't the only aspect of the visual design that received attention. Some environments, like a lush park and crumbling cityscapes, are attractive (if unoriginal), which makes them interesting to swing around in. Rocky fissures and abandoned tunnels aren't as nice to look at, though they aren't ugly either. Bionic Commando isn't a technical powerhouse, as evidenced by liberal amounts of background blur and aliased edges. However, the graphics are pleasant and the game maintains a smooth frame rate throughout. Due to the feeble weapon noises and overly grouchy voice acting, the sound design is less impressive, though it gets the job done, and the generic action-movie soundtrack frames the action well enough.

Bionic Commando offers a multiplayer component, but it's uninspired and suffers from the same bland gunplay that weighs the single-player game down. Again, the arm is expected to provide the majority of the fun, and while it's just as fun to zip-kick an opposing player as it is a terrorist grunt, it's more effective to fill him with peashooter pellets. (You can't fling rocks and cars around online, sadly.) Swinging around the map after you capture a flag, or grappling up the side of a building to grab a sniper rifle, is more appealing than the action itself, which somewhat defeats the purpose of competitive online play. At the least, the maps are well designed and keep you climbing onto balconies and swinging onto dilapidated overpasses; a map featuring side-by-side sea vessels is crafted especially well. Other maps seem too big to sustain the action, even with a full contingent of 10 players. Featuring only Deathmatch, Team Deathmatch, and Capture the Flag modes, Bionic Commando provides some brief online entertainment, but shooting at other players using the game's poor arsenal just isn't much fun.

As you play Bionic Commando, you'll be frequently struck by all the unexplored possibilities and how often the words "if only" cross your mind. "This area would be fun to explore, if only radiation didn't stop me dead in my tracks." "That firefight could be terrific, if only the weapons had oomph." "This seems like an interesting world, if only the main character gave me a reason to care." The bionic arm is a great idea that leads to some enjoyable moments, but it's not powerful enough to shoulder the burden of an entire game. 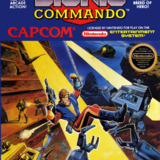