The updated graphics and new modes in Bionic Commando Rearmed are enough to make this classic still fun today, despite some control issues.

When Bionic Commando came out 20 years ago, it separated itself from the glut of other NES platformers by removing one key element: a jump button. Its tricky grappling system added a unique twist to traditional action games, letting players swing around levels while taking out Nazis who were once again intent on world domination. If you enjoyed the original, the updated graphics and extra modes in Rearmed should be more than enough to entice you into another jaunt with the robot-armed hero. For those who aren't looking through the rose-tinted glasses of nostalgia, the remake may cause you to wonder where all the excitement is coming from. Rearmed can be a little too loyal to its source material, but once you come to grips with the sometimes cumbersome controls, it dishes out a satisfying action experience.

Rearmed plays like a traditional platformer in which your jump button has been replaced by a prehensile metal arm. You'll need your trusty tool to traverse even the most innocuous of terrain. Tiny bumps impede your progress, making you search for hanging ledges to swing from and climb upon. Though the levels are structurally familiar, the unique method of movement makes them feel completely new. Having to carefully consider how to cross tiny gaps in the floor, or string together multiple swings to reach a high-hanging piece of land, is extremely satisfying. The gunplay, which restricts your aim to a horizontal blast, unfortunately doesn't provide the same thrill. Though enemies will toss grenades and leap behind barrels, they are simply too limited to pose much of a treat.

This remake is certainly difficult, but your frequent follies will not come because of expertly trained guards or deviously designed levels. The controls have not made a noticeable improvement since the original release, so you'll find yourself cursing your obstinate character as he willfully ignores your urgent inputs. The grappling hook--your main mode of locomotion--has a mind of its own, and it's in sharp contrast to your own pressing needs. You can blast your arm out horizontally, diagonally, or vertically, but the sloppy controls mean it won't always go in the direction you aim. This problem isn't nearly as prevalent on the PS3; it still feels sluggish, but you'll no longer find your grappling hook errantly flying around the playfield. There are plenty of other vestigial design choices that feel downright archaic now. Enemies are often positioned just out of your field of view, which creates many situations in which you are forced to take damage until you memorize their locations. Movements such as picking up barrels or climbing up ledges come with momentary lag, which makes you curse your slow-moving character as he nonchalantly absorbs another batch of bullets.

With the gameplay virtually untouched from the 20-year-old classic, the visuals serve as the main draw in this remake, and, despite a few hiccups, they impress through most of the game. The characters are large and detailed, with animation that remains smooth despite your limited move set. Ledges and walkways stand out strongly from the background, making it easy to navigate around levels and drop behind enemies to catch them completely unaware. The only problem is the sometimes-erratic lighting. During some levels, the lighting is so sparse that it's difficult to tell which ledges are solid and which serve as noninteractive background objects. The opposite problem also surfaces; sometimes the lighting is so intense that it can obscure your vision. One boss flashes lights that must be shot in a certain order, but because of the all-too-intense burst, it's extremely difficult to decipher exactly where the brief flickers originated. These quirks are rare, but they do serve to add another dose of frustration.

If you dig the bionic experience, there is an awful lot of content crammed into Rearmed in addition to the main game. The challenge mode is the most interesting addition. These 56 levels are the hardest tasks that you'll find in the game, and they'll make anyone who thought the real quest was too easy eat their words. The offline-only multiplayer is an unexpected treat, a feature not found in the original release. The two-player co-op mode feels pretty bizarre if you're used to navigating the environs alone, but it's certainly more fun going through with a friend. The screen smartly splits when players wander too far from one another, which can be jarring at first, but it's preferable to forcing all of the action to take place on the same screen. The four-player competitive mode is a single-screen, chaotic free-for-all. Swinging around specifically designed levels against your friends works surprisingly well, though the options are a little too limited to make this interesting for long.

The two other diversions do not fare quite as well as the challenge and multiplayer modes. Between main levels, you will sometimes have to run through short overhead excursions. These are so repetitive and shallow that they serve only as mindless roadblocks to the swinging action. You can literally sprint through, avoiding enemy encounters, after which you frantically blast the progress-blocking truck at the end. Furthermore, during the standard side-scrolling missions, you'll have to tinker with 3D block puzzles to unlock doors. Again, these time sinks are way too easy and frequent, and they ruin the otherwise fine pacing.

It's unfortunate that developer GRIN didn't put the same amount of effort into updating the gameplay as they did the graphics, but the control quirks are not enough to destroy the overall enjoyment of this well-preserved classic. Despite some questionable design decisions, the overwhelming amount of content should satisfy action fans hungry for a punishing, old-school romp. Anyone eager to set aside 20 years of design evolution will find a game that still retains the same clever levels and novel swinging mechanics that made the original's charm endure through four console generations. 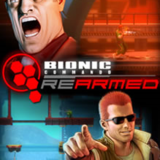